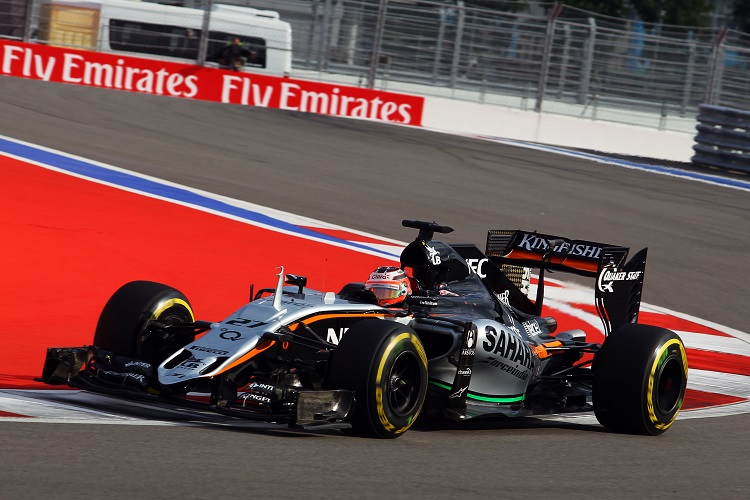 Nico Hulkenberg enthused about the team result in qualifying after he and team-mate Sergio Perez qualified sixth and seventh respectively at the Sochi Autodrom on Saturday.

The Sahara Force India driver admitted to having a ‘good feeling’ with his VJM08 throughout the qualifying session, and hopes to be able to convert sixth into a good haul of points during the race on Sunday, and will be looking to better his sixth position he achieved in Japan two weeks ago.

“I’m very satisfied with sixth place today and our qualifying performance is a great team result,” reflected Hulkenberg. “Even though we’ve had limited running here in practice, I’ve had a good feeling with the car – there is a nice balance and it’s giving me confidence.

“The result today is probably the maximum we could achieve when you look at the cars ahead of us and it means we’re starting in a great position for tomorrow.

“The race is going to be interesting because there are still some unknowns about how the tyres will behave over long runs and the strategy calls won’t be easy. I’m looking forward to the race and converting this grid position into some good points.”

Team-mate Perez agreed with Hulkenberg about the great team result in Russia, but admits there are still question marks over the performance of the tyres over the longer runs after so many disruptions during all three practice sessions that prevented the usual information-gathering from happening.

“It’s always tricky to get the car where you want it to be when you don’t do much running in practice, but it’s a good result for the team and I believe we got the most we could from the session,” said Perez.

“This is not an easy track to put a good lap together and getting the tyres to the right temperature is a challenge, so I think we can be pleased with this result. I set my best lap on used tyres, which shows that the supersoft tyres take a long time to reach their best.

“There are still a few question marks about the performance of the tyres during long runs, which will make it very interesting tomorrow, but I don’t expect degradation to be very high. We have a very good chance to be competitive in the race; it will be a tough one but I’m confident we can come away from it with some big points.”