The second season of the Michelin Clio Cup Series saw Luke Herbert and Luke Pinder take the two championship titles on offer following another solid campaign for the BARC-run series.

Grid numbers were down across both the ‘Racecar’ class, utilising the third-generation Clio Cup race cars, and the ‘Roadcar’ class, featuring converted Renault Clio Renaultsport 197’s, but the racing remained close fought and action-packed across the year.

Herbert’s title success was the culmination of three strong years competing in the tin-top championship, having dominated proceedings in the trial campaign in 2013 before securing eight top four finishes and a third place championship finish last year.

Finishing behind him in the standings last year was Paul Streather, and those two would come back and dominate the championship this time around, sharing ten of the thirteen race wins on offer as they fought it out for the title.

Herbert got the year off to a near-perfect start, with two victories in the season-opening Rockingham triple-header followed up by another classy double win during the championship’s first ever visit to Thruxton. 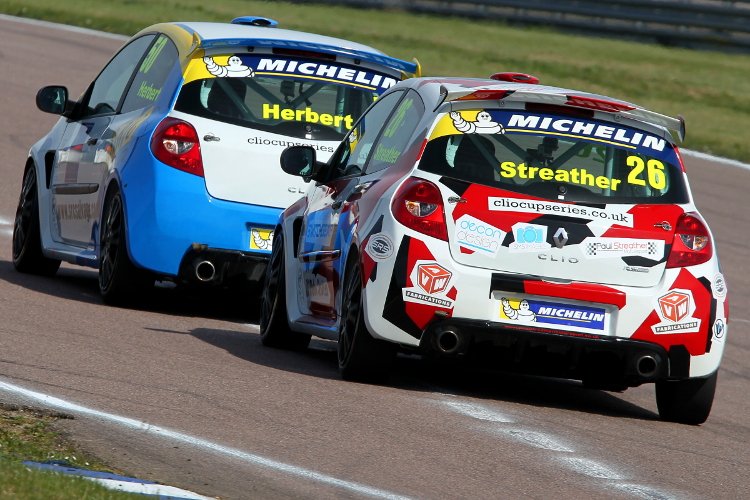 Herbert And Streather Fought It Out To Succeed Mike Robinson As Champion – Credit: Jakob Ebrey Photography

Streather kept in touch with the other win on offer at Rockingham but it wasn’t until mid-season that he really hit form, with a second win of the campaign at Croft followed by a dominant double at Brands Hatch, a weekend in which Herbert suffered his only retirement of the campaign.

A pair of second places on the penultimate weekend at Oulton Park kept Streather in contention, but two more wins for Herbert put firmly in control of the title race and a pair of podiums at the Silverstone season finale secured him the title.

Herbert ended the year with an unmatched six race wins, four other podium finishes and four pole positions with Westbourne Motorsport, with Streather a clear second overall with his four victories and three other visits to the podium.

Best of the rest was Andy Jordan, the Finesse Motorsport racer being a consistent presence at the head of the field with ten top five finishes over the year. Following three podium finishes in the first four meetings, Jordan ended his season in style with a double victory at Silverstone.

The other race-winner across the campaign was Matt Allison, the former BTCC racer completing a part-campaign with InterCity Racing. He impressively finished on the podium in three of his first four races in the series, securing victory at Croft.

Ahead of him, a close fought battle for the final spot in the championship top four saw Sam Randon edge Brett Lidsey. Both were regular podium visitors, securing five top three finishes each with Westbourne and 20Ten Racing respectively.

One of the most impressive drivers across the season was James Dorlin, the reigning JSCC champion having had to miss the opening weekend due to being too young to compete. When he did race, he finished on the podium four times to complete his first season in the top six of the standings.

Adam Hatfield was a regular top eight finisher across the season, taking a best result of fifth at Silverstone. That was a finish Tom Barley matched on three occasions as he rounded out the championship top ten with Pete Bennett, who carded a top four breakthrough finish at Thruxton.

Five drivers made brief appearances across the campaign, with the standout results coming from Ben Davis, who took a pair of fourths at the Rockingham opener, and reigning Road Series champion Anton Spires who took two top six finishes in a four race spell at the end of the year.

Dominant Pinder A Class Above

In the Road Class, Pinder had the edge over the competition throughout the campaign, having stamped his authority on proceedings with five wins on the bounce across the Rockingham and Thruxton weekends.

A nightmare weekend Croft though saw a heavy race one accident with team-mate Jake Honour end his meeting, with the points lost keeping the title battle open as the season wore on, with double winner that weekend Tyler Lidsey and Nic Harrison leading the charge.

Pinder was right back on form next time out though, with a win at Brands Hatch and then an Oulton Park double meaning that despite an electrical failure in the Silverstone opener, a ninth win of the campaign in the final race secured him a deserved title with Jade Developments.

Despite not tasting victory across the season, CGH Import.com’s Harrison secured the vice-champion honours with seven podium finishes across the year, just edging out 20Ten’s Lidsey who had added a third win of the campaign at Silverstone to his Croft heroics.

Honour was the other race-winner this season, following second place finishes in each of the first four races with a long-awaited win at Brands Hatch. Three more podiums followed in the final four races, with just the Croft troubles denying him a higher points finish than fourth.

Sarah Franklin and John Creasey were the other class regulars across the year. Franklin took a podium double at Croft on her way to completing the class top five, whilst Creasey notched top three finishes at Thruxton and Brands Hatch.

Matt Fincham was another to feature on the podium, taking third place at Rockingham as part of a five race spell at the start of the year, whilst Jack Fabby became the youngest driver in series history when he competed at Silverstone, impressing with a pair of thirds.

The full final championship standings can be found here, whilst all the key statistics for the 2015 campaign can be read here.