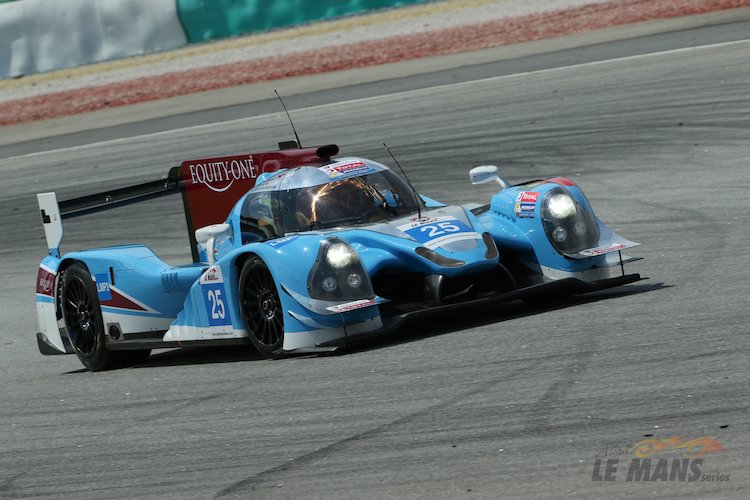 Jamie Winslow in the Algarve Pro Racing Ligier JSP2 has claimed pole position for the Three Hours of Sepang – the second round of the 2015 Asian Le Mans Series season.

Fastest all weekend, Winslow once again stuck the car on pole with a time of 1:58.773 putting the car ahead of the two Oreca 03R cars making up the rest of the LMP2 field.

Starting on the front row will be the Judd powered Race Performance car after Shinji Nakano finished a second down on the pole time with a 1:59.734 – only half a tenth ahead of Richard Bradley in the Eurasia Motorsport car which recorded a 1:59.787.

After qualifying, Winslow said: “The team have done a fantastic job, the car’s hooked up. We arrived with a setup working. Basically, I just had to do my job, not make any mistakes, and get the most from the car and the time just took care of itself. I think the Ligier runs a little more downforce than some of the other cars, so we think that for the race it’s going to look after its tyres pretty well. My two teammates have been doing a very good job as well. Their pace is very strong compared to the other teams. Hopefully tomorrow we won’t make any mistakes, or push too hard, cruise it round, then after three hours, we’re still in front.”

Fourth overall and first in the LMP3 class is the DC Racing Ligier JSP3 after Ho-Pin Tung became the first of the cars not to drop below the two-minute mark setting a 2:03.244. The only other car in the class, the Team AAI ADESS 03 will start from the back-row of the grid after they were judged to have pushed their car back into the garage before the session was over – a move against series rules. The punishment for this most grievous of offences was to have all their laps deleted.

Behind DC Racing then, is the first of the GT cars – the Clearwater Racing McLaren 650S. Rob Bell claimed pole in the largest class racing in Malaysia this weekend with a 2:06.838 putting them two-tenths up on the Absolute Racing Audi R8 LMS Ultra.

Third place is the Team AAI BMW Z4 GT3 as they couldn’t close up on the front-row starters with a 2:08.141 putting them more than a second down on the Absolute Audi they were lucky not to suffer the same fate as their Mercedes SLS GT3 sister car which had all its times deleted because of the same offence as the team’s LMP3 entry.

The fastest GT car from yesterday’s practice session – the ARC Bratislava Audi – was also sent to the back for that same offence.

Mingled in with all the GT cars are the two CN prototypes – showing that traffic could play a big part on the battles of both classes. The fastest of the Wolf GB08s is the Atlantic Racing Team entry which recorded a 2:08.019 in the hands of John Bryant Meisner. Two GT cars separate that car from the Avelon Formula entry meaning they’ll have a scrap early doors to catch up with Atlantic Racing Team.

Also having a scrap – admittedly only with themselves in the one car GT Am class – was the KCMG Porsche 997 GT3 Cup which will start 12th on the grid after Dan Wells set a 2:13.623.

By Alice Holloway
1 Mins read
More changes have been made to the LMP2 cars to ensure the Hypercars are faster ahead of the 2021 FIA World Endurance Championship.
24 Hours of Le MansAsian Le Mans SeriesEuropean Le Mans Series

By Paul Hensby
1 Mins read
United Autosports will not field their Ligier JS P217 at Petit Le Mans as it would compromise their efforts in both the European and Asian Le Mans Series’.