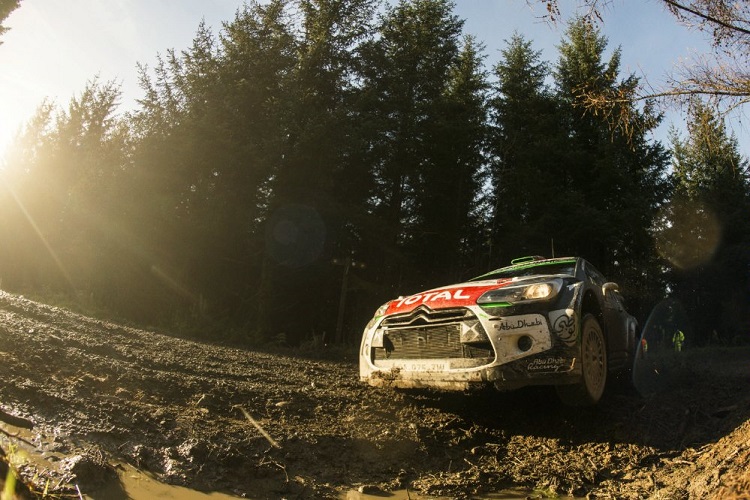 Sebastien Ogier mastered the Welsh weather on the opening day of the 2015 Wales Rally GB to top the time sheets, but the story of the day was a superb performance from Citreon’s Kris Meeke who finished the day just 13.5 seconds from the Volkswagen Motorsport leader.

“Kris is driving very well and it won’t be easy to win this rally. I have to focus on myself and not make a mistake and I’m just happy to finish a difficult day without trouble,” said Ogier at the end of the opening day.

Andreas Mikkelsen showed no signs of missing yesterdays shakedown as he finished the day in third place, 17.9s behind Meeke.

Torrential rain welcomed the competitors as they headed in to the depths of mid-Wales. It wasn’t long before the first of the big-name drivers were caught out, just 600 metres in to SS2 Volkswagen Motorsport’s Jari-Matti Latvala slid in to a ditch and was unable to recover, leaving him to head in to day to with damage limitation in mind with the the Rally2 restart.

While Meeke is closing in on the lead of the rally his number 1 task is to help Citroen beat Hyundai in the battle for second in the manufacturers championship. A strong result will give Meeke a better chance of securing a drive for 2016 having mentioned that as it stands he has no contract in place for 2016.

With Latvala sliding out of the rally early it was down to Andreas Mikkelsen to mount a second Volkswagen challenge as he battled with inconsistent grip throughout the day.

Mads Østberg finished in fourth but suffered with a leak in the bodywork, the cockpit of the Citroen DS3 would be a mudbath as the outside made its way in.

Hyundai’s Dani Sordo rounded out the top five, just ahead of a stuggling Ott Tanak and Hayden Paddon who is looking to maximise points for the team as Thierry Neuville takes a step back for this rally to regain his confidence. The Kiwi struggled throughout the day as hydraulic issues left him unable to use the paddle shift gear change or handbrake.

Local hero Elfyn Evans looked set for fifth place at the midway point but a puncture and a stall would drop him down the running order to eighth. Lorenzo Bertelli and Stéphane Lefebvre rounded out the top 10 with Lefebvre currently battling flu.

Both Thierry Neuville and Kevin Abbring suffered problems in their Hyundai i20s with Neuville losing the left-rear wheel when the wheel studs broke and Abbring was forced to stop with a overheating engine due to a water system leak.

Another early top-10 runner was Martin Prokop who was in a comfortable eighth before a broken rear suspension dropped him down the order while Robert Kubica suffered a puncture and an off in the last stage of the day.

Competitors face a gruelling 142.32 kilometres over nine stages, with the final two to be held in darkness.