Tricky conditions on the Rallye Monte-Carlo caught out a number of front-running drivers today with Robert Kubica and Hayden Paddon being caught out on SS3 early.

Paddon was unlucky when the backend of his 2015-spec Hyundai i20 WRC stepped out on a right-hand corner, the Kiwi was unlucky to get away with the incident as the left rear wheel glanced off a tree, breaking the suspension and ultimately putting him out of the rally.

Kubica would fall foul of the same corner as his Ford Fiesta RS WRC understeered on the ice, the Pole slid from the road in the low speed incident but unfortunately came to a stop as he hit a tree, damaging the front left of the car and leaving it stranded on the edge of the road. There would be added insult to injury as Elfyn Evans came through the stage and glanced the rear of Kubica’s stranded car, luckily for the Welshman he continued while Kubica’s car was thrown another foot down the embankment.

Eric Camilli had been making up time as he settled in to the M-Sport Ford Fiesta RS WRC including a fifth fastest time on SS4 but this was to change after the lunchbreak when he was forced out of the running after becoming stranded on SS6, very near to the same area that claimed Paddon and Kubica earlier in the day.

Italian Lorenzo Bertelli was also a SS6 victim after he crashed in to a wall, damaging the front of his Ford Fiesta RS WRC. Ott Tanak had a scare in the same area and was stopped briefly, thankfully for the Estonian he manage to get his Ford Fiesta RS WRC going again with a little help from the crowd.

“It happened after a high-speed cut. I just lost the rear of the car” said Tanak. “We spun, went into a ditch and rolled. There’s a window missing, but that’s not too bad. It’s worse that we lost the rear spoiler and that’s upset the handling.”

The battle for the lead in WRC was hard fought throughout the six stages of the day. Sebastien Ogier started his counter attack on the overnight leader as soon as the road opened. He took 0.9 seconds out of the Abu Dhabi Total World Rally Team Citroen DS3 of Kris Meeke in the opening 14.65km of the day. The Briton countered on the first run though Les Corps – Chauffayer’s 24.78km, stealing back 0.7 seconds but would ultimately be facing a losing battle. The Volkswagen Motorsport VW Polo R WRC claimed the lead of the rally on the final stage of the day’s first leg, SS5 from Les Costes to Chaillol.

Kris Meeke was bullish despite losing 8.2 seconds to the local born defending champion and finishing behind Ogier’s Finnish team mate Jari-Matti Latvala for the first time on the ‘Monte’.

“There were just a few seconds between me and Sébastien,” Meeke said, “but he made the difference on a few kilometres between Les Costes and Chaillol. As far as I’m concerned, I was happy with my driving; I really don’t know how he made up the time! But in any case, it’s still tight and the fight is by no means over.”

The tactic of picking his pace and sticking to it worked out for Meeke halfway through the second leg when he reclaimed the rally lead from Ogier on SS7. The 0.8 second margin wouldn’t last out the final special stage of the day but boosted his confidence ahead of Saturdays stages. A 9.5 second deficit to the Polo R WRC on the final pass through Les Costes to Chaillol put Meeke in second place overnight on the second day of the rally.

Dani Sordo struggled with his New Generation i20 WRC and hopes for better on Saturday. (Credit: Hyundai Motorsport)

Latvala continued to run third at the end of the day though a 58.6 second deficit to the Citroen and a 1:08.1 shortfall over his team mate left him looking behind and focused on defense heading into day three. Andreas Mikkelsen held 4th place in the lead Volkswagen Motorsport II Polo with the best of the new for 2016 Hyundai Motorsport #3 New Generation i20 WRC entries, Thierry Neuville a further 14.0 seconds behind. Mads Ostberg was best of the Fiesta’s in sixth place, 2:18.5 off the lead of the rally in his M-Sport World Rally Team Fiesta RS WRC with a struggling Dani Sordo in seventh.

Sordo struggled all day in his Hyundai New Generation i20 WRC, with grip problems at the front end of the new car. “It hasn’t been the best of days for me but we are still adapting to our new car. We knew we’d have some lessons to learn in these opening stages and so it has proved. The set-up we had this morning was not really a good match for me and I couldn’t get the confidence you need in Monte-Carlo’s slippery conditions. We made some changes to stiffen the suspension but we had no grip with the soft tyre, so couldn’t push as we wanted. We know we have work to do but we will focus on this as a team tonight and hope to make some advances tomorrow.”

Stephane Lefeßvre took eighth in the second factory Citroen with Bryan Bouffier for M-Sport and Ott Tanak for the DMACK World Rally Team rounding out the top ten and the solid block of WRC entries. 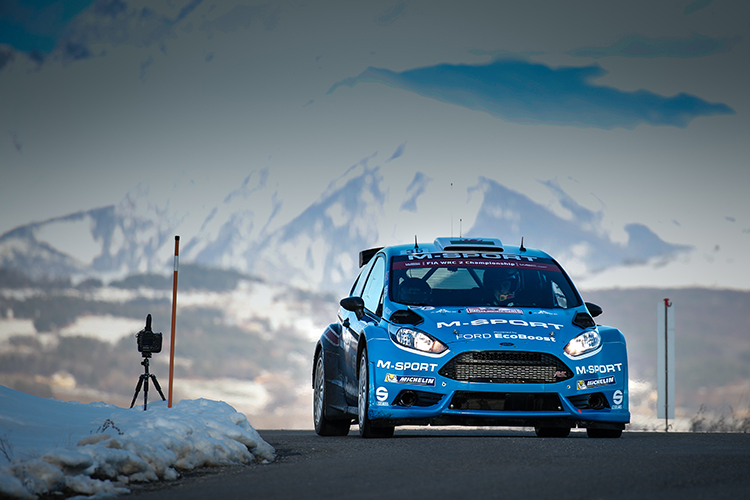 With 7 wins from 8 stages, Welshman Elfyn Evans in control of WRC2 for M-Sport. (Credit: McKlien/M-Sport WRT)

In WRC2 the lead overnight was claimed by Welsh driver Elfyn Evans. The M-Sport World Rally Team driver held a 1:32.0 advantage over his nearest rival, Armin Kremer despite his contact with the stranded WRC car of Kubica. The #35 M-Sport Fiesta R5 driver capitolised on his WRC experience to extract maximum performance from the R5 version of the Ford rally car and has only lost one stage on the 2016 Rallye Monte Carlo. Julien Maurin‘s privateer entry sits third at the end of day two.

WRC3 is under control for Ole Christian Veiby who leads the class in his Printsport entered Citroen DS3 R3T by 30 seconds. In second place is the fast Frenchman Jordan Berfa for Peugeot Rally Academy with the ACI Team Italia Peugeot 208 of Fabio Andolfi in third place.