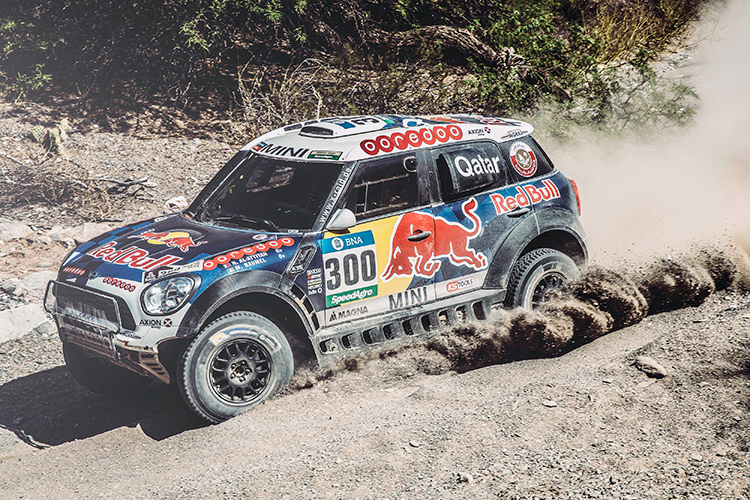 After a day of rest competitors returned to action in the 2016 Dakar Rally in what proved to be a dramatic day for the front-runners as Sébastien Loeb and Daniel Elena rolled over, losing over an hour while they struggled to fix the car.

Nasser Al-Attiyah and co-driver Mathieu Baumel claimed the first stage victory for a non-Peugeot vehicle as he took his AXION X-raid Team Mini to the top of the timesheets, with that result and Loeb’s demise he moves in to third place overall.

“It is a good feeling to win the very first stage after the rest day,” said Al-Attiyah. “We put a lot of pressure on our competitors and our target now is to put even more pressure on them in the next two to three days and to win Dakar. That is why we are here. From the beginning of today we took the advantage and pushed a lot. The last part wasn’t easy but we took the win. We open tomorrow first on the road so we will push and push again.”

Heading in to the second part of Dakar, the impressive Loeb held the lead on his debut event but he would find out how unforgiving the event could be as he flipped over exiting a river, “In quite a wide and fast river, I arrived a little bit to the right, but there was a channel just there. I didn’t see it at all, and came towards it at high speed,” said Loeb.

“We hit the step as we came back out and that sent us into a series of rolls. The radiator was broken but we managed to fix it and put some water back in. We also changed the two rear wheels, which were broken. And then when we were about to set off again, we had a broken shaft.

“So we got out and pulled everything apart again. Finally we were able to get going after losing more than an hour. Our plan was always to come here to get some experience. OK, the first week went better than we expected as we were in the lead. Now the situation is less good. For that to happen less than 10 kilometres from the finish is frustrating, but that’s life. Now we have to carry on”. 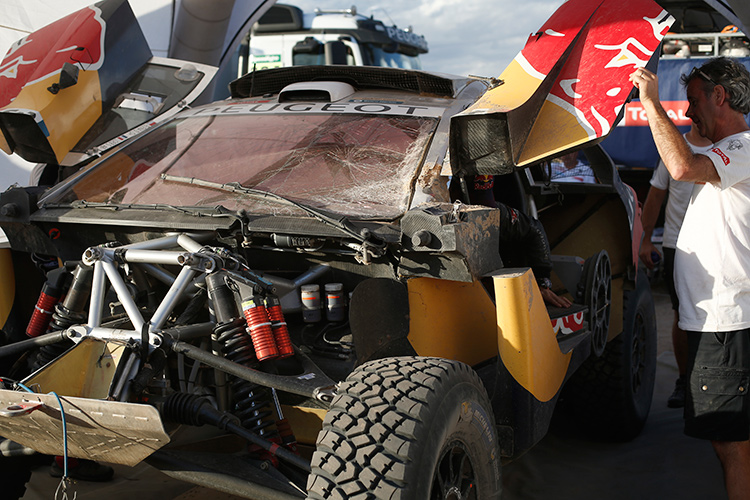 While Loeb and Elena managed to get the car going they lost a lot of time, finishing the stage in fourty second place, the result of this would see the Peugeot tumble from the top of the timesheets to eighth place, one hour and five minutes down on new overall leader Stephane Peterhansel.

Carlos Sainz looked set to take the stage win as he set the pace until the penultimate waypoint, he would finish the stage an agonising twelve seonds behind Al-Attiyah. “It was tricky to open the road,” said Sainz. “Because the second part of the stage presented us with the first real off-road action of the rally, with camel grass and plenty of navigation. Lucas did a great job and I’m pleased that we didn’t lose too much time today.”

The solid result would mean that the Peugeot driver moved in to second place overall as he reduced the gap to Peterhansel to two minutes nine seconds.

Cyril Despres put in his best performances of the rally to finish in fourth place, “This has been my best ever Dakar stage result in a car!” he enthused. “And it’s the first time that I’ve been able to go really quickly in the 2008 DKR. There’s no shame in dropping four minutes to the leaders on a stage like this one. Everything went well for me. It was a difficult stage and it feels like the Dakar is starting again. I’m very pleased with David’s work today as it’s the first time that he’s been this quickly through wadis and through dunes.”

Mikko Hirvonen finished the stage in fifth place and moved up to fourth overall in the standings with Loeb dropping down the order. “They weren’t proper dunes really, to me,” said Hirvonen. “It was more like fesh-fesh and proper off-road surface. I enjoyed it, though. It was more like traditional off-road racing. Otherwise, it wasn’t too bad and we’re ok.”

Toby Price leads the Bike category, Marcos Patronelli leads the Quad bikes, while Gerard de Rooy is in charge of the Truck leaderboard.

By Justin Nguyen
2 Mins read
The 2022 Dakar Rally in Saudi Arabia will kick off the inaugural FIA World Rally-Raid Championship, which has a 5-race schedule planned with dates in Abu Dhabi, Kazakhstan, Andalucía, and Morocco.
FIA World Rally Championship