Vettel sets the pace on day one in Spain 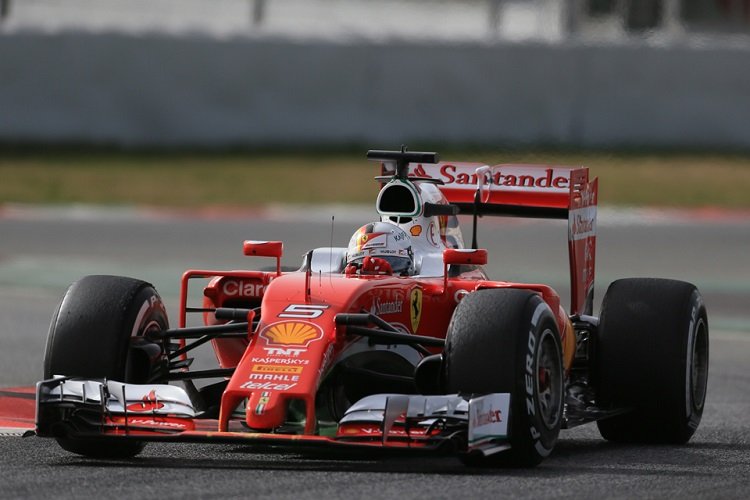 Sebastian Vettel and Ferrari took the honours after the first day of pre-season testing, but it was Lewis Hamilton and Mercedes who were the busiest team on Monday.

Vettel’s 1m24.939s was set late during the morning session at the Circuit de Catalunya using the Medium Pirelli tyres, but the Ferrari drivers 69 laps was dwarfed by Hamilton, who completed a mammoth 156 on the opening day in the new W07 Mercedes.

Hamilton ended the day with the second fastest time, 0.470s down on Vettel, with Daniel Ricciardo third fastest for Red Bull Racing, with the Australian completing 87 laps.

Valtteri Bottas placed fourth for Williams Martini Racing, with the Finn completing 80 laps on Monday in the new FW38, while Alfonso Celis Jr rounded out the top five for the Sahara Force India team, running 58 laps with a best time of 1m26.298s.

Jenson Button had a largely untroubled day in the McLaren-Honda, racking up 84 laps and finishing with a best time of 1m26.735s, with the Scuderia Toro Rosso of Carlos Sainz Jr next up in seventh and Marcus Ericsson in the 2015 Sauber eighth.

Pascal Wehrlein was ninth for Manor Racing, completing their first day of pre-season testing since 2014 after missing all testing in 2015, with the German racer running 54 laps of the Circuit de Catalunya and finishing with a best time of 1m28.292s.

Romain Grosjean had a scare when the front wing of his Haas F1 Team VF-16 fell off down the main straight and caused a red flag, but the Frenchman completed 31 laps and set the tenth best time of the day.

Eleventh and last was Jolyon Palmer, who had a frustrating day for the Renault Sport F1 Team, completing 37 laps after a number of issues on his RS16 and setting a best time of 1m29.356s, 4.417s back on Vettel’s pacesetting time.