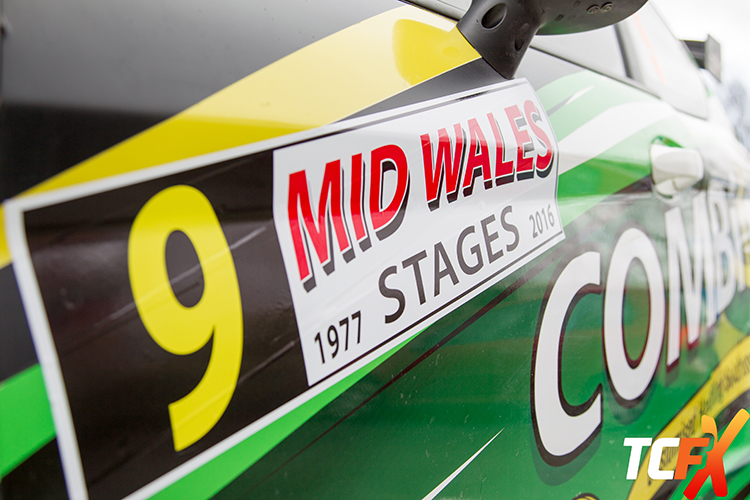 The Mid Wales Stages Rally has always been a popular event with competitors and spectators alike. The return of the MSA British Rally Championship brought more cars, more competitors and more spectators to the event including our GT and Endurance photographer, Nick Smith from The Image Team. We sent him to Wales as part of the series of photographic challenges we have been setting him, to capture the event from public areas, with strict instructions to bring back 20-30 great photos.

Saturday saw him in the service park as teams set up and finished preparing the cars ahead of the opening round. At night he headed to Sweet Lamb Rally Complex for the first stage. On Sunday he was up with the lark for the long climb to the summit of Pikes Peak, the Welsh rally stage named after the famous Colorado hill climb. The afternoon saw him down in the bowl at Sweet Lamb to capture cars over the jump.

He over provided and after sorting through 748 photos from the service park and three of the six stages he has brought this distillation of images. Our first gallery from the event focuses on the B1 class cars which include R5 spec ultra-modern machines and S2000 cars.

These Citroen Racing supported Citroen DS3 R5s were at the cutting edge throughout the event.

David Bogie was one of the closest rivals to Evans during the event but damaged his car prior to the SS5 jumps.

There is a rally car in there somewhere, honest!

A man with much expectation, Max Vatenen drove exceptionally well.

Damien Cole rolled his S2000 Fiesta shortly after this photo was taken.

The Pikes Peak wind turbines have rapidly become one of the premier features on the stage.

A taste of France thanks to DGM Sport

Expect good things from Elfyn Evans and he will provide. This leap at Sweet Lamb came on the way to a 17 second victory margin.

Rhys Yates retired on SS4 after stopping in the stage.

After team mate James Slaughter withdrew his Fiesta before the event, Marty McCormack was forced out when he suffered diff problems before the start of the rally.

Welsh weather is never predictable and for the first pass through Pikes Peak, there was too much snow on the ground to allow spectators access.

Jamie Anderson made the trip from the Midlands to 14th in class.

One of the hero cars of the BRC, the Simpson Motorsport Skoda Fabia R5 was ready to go early.

Any higher and Tom Cave would need a pilots licence as he traversed the second of three jumps in the Sweet Lamb bowl.

Like bringing a gun to a knife fight, this R5 Fiesta was actually entered in the national rally against Escorts and Corsas.

James Moffet got to 6th in class with his Fiesta R5.

Desi Henri came equipped to fight at the front but struggled for pace and placed 9th in B1.

Third overall was Tom Cave’s reward for pleasing the fans with this jump.

The Hafren Industrial Estate housed the service park, the Moffet brothers headed to scrutineering in convoy.

Ooops, I’ve damaged it. I’d better be quick then.

Johnathan Greer took the advantage over his team mate when the Irishman suffered a puncture on SS5.

Conditions began to worsen during the penultimate stage, a challenge for driver and photographer alike.

Bangor based Robert Woodside finished fifteenth in his home rally.

Heading back to the service park for the ceremonial finish.

Several cars were displayed at Rally HQ before the event got underway.

Go no closer, Fredrik Ahlins is coming through.

The rally started in darkness so our first look at the cars was with light pods attached.

Rhys Yates navigates the turbines a stage before his unfortunate retirement.

Tricky conditions on Pikes Peak proved no problem for the Citroen DS3s.

The only 208 on the event made light work of the snow and ice.

Hugh Hunter made light work of the gravel, snow and ice to finish 10th in B1.

Four wheel drifting from R5 cars shows why the class has been so quickly taken to fans hearts.

Having Karcher for a sponsor is a good thing when the going gets this muddy.

Elfyn Evans throws his Fiesta R5 in sideways, carrying a lot of speed after the Sweet Lamb jump.

A hard landing in difficult contitions became the order of the day as snow continued to fall.

The CA1 Sport Skoda Fabia goes wide as a big jump followed by a big stop catches David Bogie out.

Hobbled by a puncture on SS5, Keith Cronin finished 40 seconds behind his team mate.

An early entry to the hairpin for the damaged but still quick CombiLift Fiesta R5.

Galleries from the B2 and other classes and the national event are still to come. You can still see our other challenge galleries, the Riponian Forest Stages Rally and MGJ Engineering Brands Hatch Winter Stages Rally too. Nick will be going to more events throughout the year to take photographs from the spectator stands and bring back galleries for you to see. If you have an idea for an event he can cover, let us know via the contact form.

All photographs in this gallery are credit Nick Smith/TheImageTeam.com and the full 748 images from the event can be viewed on his website shortly.

By Steven Batey
5 Mins read
The FIA have recently introduced a new rallying pyramid into the sport and this handy guide will explain what each class is all about.
British Rally Championship

By Steven Batey
2 Mins read
Citroen Racing have revealed a new for 2021 C3 Rally2, that builds on the success of the C3 R5 while aiming to reduce running costs for customers.