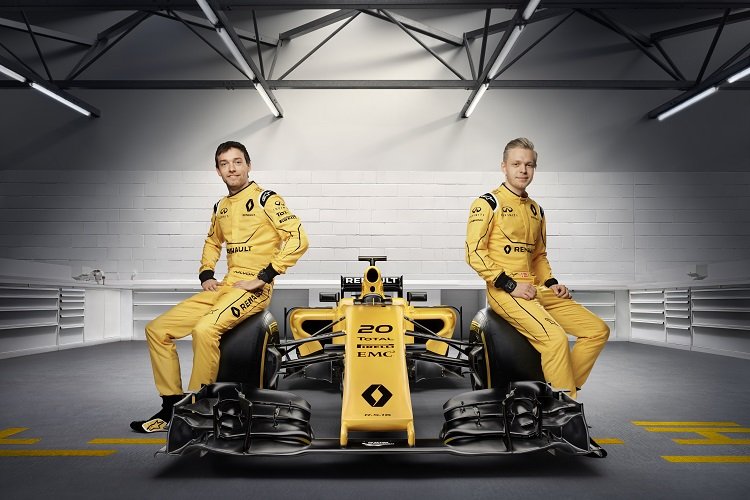 With the new Formula 1 season just around the corner, the Renault Sport Formula 1 team have revealed they have dropped the all black livery they ran with during pre-season testing for a more traditional Renault yellow.

The plan to reveal their definitive livery for its R.S.16 had been announced for after pre-season testing at the Circuit de Catalunya when the plans for the Renault team was announced at the beginning of February in Paris.

Cyril Abiteboul, the Managing Director of Renault Sport, revealed that the team had planned to reveal its new livery in a unique way, and it was decided to show off the updated car on a bespoke 7.5m long surfboard in Docklands, Melbourne, with race drivers Kevin Magnussen and Jolyon Palmer being joined by professional surfer Ellie-Jean Coffey in the presentation.

“We had a new livery to unveil in Melbourne, but we wanted to do things a little differently,” said Abiteboul. “We’re in F1 to ultimately get lots of points on track, but also to get lots of attention off track, so we came up with this idea.

“To our knowledge it’s the first time an F1 car has ever surfed! It fits with the Australian theme, but moreover it aligns us with the spirit of adventure we see in the latest range of Renault products such as the Captur and Kadjar.

“The black and yellow Sirius colours themselves are naturally the corporate colours of Renault Sport, but also share the heritage of Renault Sport on track. The first-ever Renault F1 car, the RS01, hit the track in yellow and black in 1977 and this latest livery is a nod to this formidable car.

“To create much more tangible links between Renault Sport Cars and Renault Sport Racing, we have also used colours to showcase the matt white colour available on the Renault Clio R.S Trophy.

”Meanwhile we have added some contemporary touches to make the R.S.16 stand out. We have used metallic colours that will reflect the lights at the night races, the ‘diamond’ pattern at the rear of the car fits in with our new brand identity and the gold flashes signify we aim for the top.”