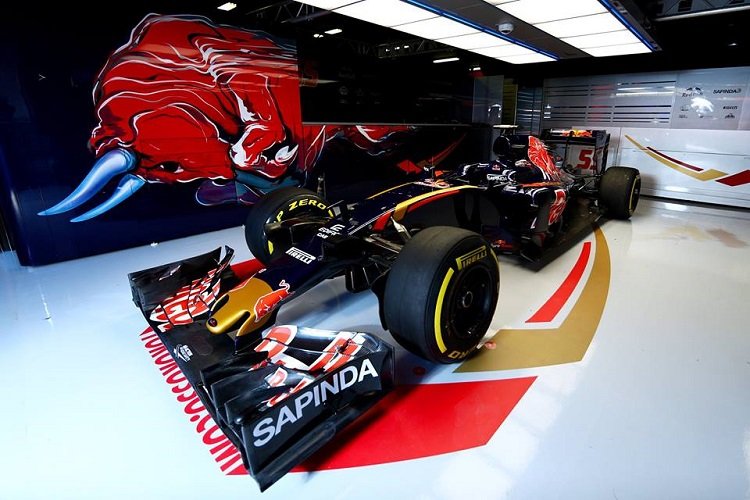 Scuderia Toro Rosso have unveiled their 2016 challenger in its new livery at the Circuit de Catalunya for the second pre-season test.

Due to the Italian team’s switch from Renault to a year-old Ferrari engine at the end of the 2015 season, staff were forced to work extra shifts in order to complete the STR11 before first pre-season testing last week, and there was no time to complete their livery.  Instead the outfit decided to run a temporary navy blue test livery in Barcelona during the first test.

The STR11 is the first Toro Rosso car to be built in their new factory facility in Faenza, team principal Franz Tost is particularly pleased that this season will see the team return to Ferrari power with everyone looking forward to working with their friends from Maranello.

“We are proud of this car and what it represents in terms of the work that went into designing and building it in record time in our new facility in Faenza,” said Tost. “And I am particularly pleased that 2016 sees a return to Ferrari power, with everyone looking forward to working once again with our friends from Maranello.

“None of this would be possible without the invaluable support of our partners and sponsors; Red Bull, Sapinda, Estrella Galicia. We are very happy to welcome back our friends from Falcon Private Bank and to start a new cooperation with Casio Edifice.

“In Formula 1, the stars are the drivers and I am keen to see what our two very talented youngsters, Max and Carlos can achieve this year, as they are now in their second season.”

Max Verstappen will be at the wheel of the STR11 for the first day of pre-season testing on Tuesday.