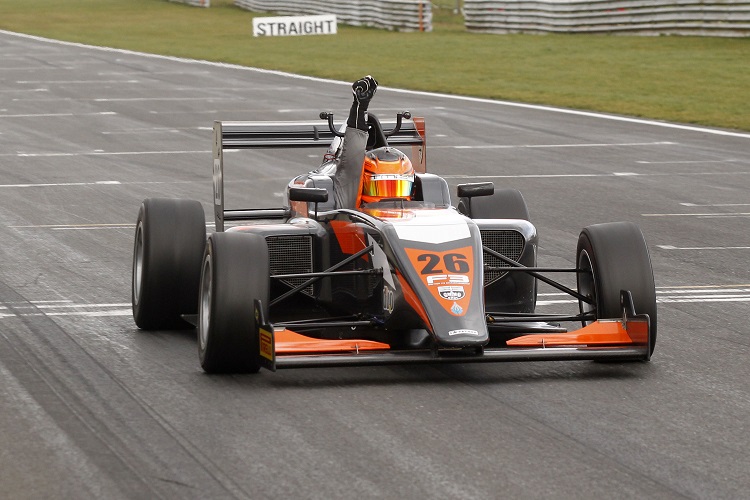 Matheus Leist worked his way through from tenth on the grid to win a rain-soaked second race around Snetterton on Monday. Though success from his fellow BRDC British F3 competitors means the Brazilian only goes fifth in the standings.

The second race of the Easter Weekend saw a delay as Storm Katie battered the Norfolk countryside. As a result it was wet for the start with a short downpour causing havoc on the opening few laps. Enzo Bortoleto had the honour of benefiting from the first reverse pole of the year, but it was Enaam Ahmed who made the most impressive getaway as he quickly worked up to third, behind the Brazilian and second placed Jan Jonck.

Another driver who’d made the most of the start was Leist, who’d quickly worked his way up to fourth before benefitting from a scrap up ahead to take the lead on the third lap.

The incident had bumped Jonck down the order, but he wasn’t the only casualty in the early stages, as Tarun Reddy and Ricky Collard pulled off at Oggies thanks to a separate incident. The retirement cemented an unlucky weekend for the Brit. Elsewhere, Omar Ismail became the third name to be classed as out of the race.

This saw the introduction of the safety car as Leist led from Ahmed and Bortoleto. Having stayed out of trouble at the start, Toby Sowery and race one winner, Lando Norris soon found themselves in the top five thanks to Ben Hingeley’s pit stop.

With only 6 minutes left on the clock, the race was restarted allowing Sowery to attack and overtake Bortoleto on the opening lap. Meanwhile, Sisa Ngebulana leaped up to sixth at the expense of Thomas Maxwell, dropping the Australian two spaces.

In the closing minutes, the top three broke away as Bortoleto failed to hold off the pressure behind, allowing Ngebulana to further improve his position up to fourth, followed through by Aleksanteri Huovinen.

As the flag dropped, Leist celebrated a memorable victory in front of Ahmed and Sowery. A last lap lunge by Huovinen saw him claim fourth with Ngebulana and Norris following suit. Meanwhile, Maxwell finished in seventh after Bortoleto lost yet more time.

The result sees Norris maintain the points lead, but with Ahmed and Huovinen less than five points behind, no clear leader has yet to emerge.

By Michael Callander
1 Mins read
Mexican racer Sebastian Alvarez returns to racing after taking a year out due to COVID-19 pandemic.
British F3

By Michael Callander
2 Mins read
Reema Juffali has graduated to BRDC British F3, and will compete with Douglas Motorsport in 2021.