Following Renault’s decision to withdraw its support of the Formula Renault 3.5 Series at the end of 2015, the championship has gone through a major overhaul over the off-season, and this weekend’s trip to Motorland Aragon marks the birth of the Formula V8 3.5 Series.

Now under the leadership of RPM and Jaime Alguersuari Sr, the championship has seen an overhaul of its calendar, while some of the teams are also different to what was seen in the final FR3.5 season.

DAMS announced their intention to withdraw before the end of 2015, but they have since been joined on the sidelines by Tech 1 Racing, Carlin and Pons Racing, while International Draco Racing have sadly closed their doors.

Despite teams withdrawing, other teams have come in, with RP Motorsport, Teo Martin Motorsport, SMP Racing and the Durango Racing Team, meaning ten teams are scheduled to compete in 2016, although Comtec Racing’s participation remains in doubt after failing to test at any of the pre-season tests.

Last year’s FR3.5 championship winning squad Fortec Motorsports do return however, and both Swiss driver Louis Deletraz and Brazilian Pietro Fittipaldi will be looking to follow in the footsteps of last year’s Drivers’ champion Oliver Rowland, who has moved on to GP2.

Deletraz was the winner of Formula Renault 2.0 Northern European Cup in 2015 and also took the runners-up spot in Eurocup Formula Renault 2.0, and has also become part of the Renault Sport Academy, while Fittipaldi is the grandson of two-time Formula 1 champion Emerson Fittipaldi, and raced in the European Formula 3 championship with Fortec in 2015.

The Charouz-run Lotus team also continue with an all-new driver line-up in place, with GP2 Series veteran Rene Binder being joined by Tech 1 Racing refugee Roy Nissany, who secured a podium finish in 2015 at the Red Bull Ring.

Arden Motorsport have retained the services of Egor Orudzhev for a second season, with the young Russian prospect having won twice during the 2015 season at the Hungaroring and Le Mans, while the other 2015 Tech 1 Racing driver Aurélien Panis joins the team as his team-mate.

Panis finished twelfth in the championship last year, with his best weekend coming at his home event at Le Mans when he secured a fifth and sixth in the two races.

Last year’s runner-up Matthieu Vaxiviere returns for a third season in the championship, but has switched from Lotus over to the new SMP Racing team, that initially was set to be called Spirit of Race after being set up by AF Corse boss Amato Ferrari.

Joining the Frenchman is Russian teenager Vladimir Atoev, with the French and SMP F4 graduate set to be the youngest driver on the grid at just seventeen years of age.

Cecotto is the most experienced GP2 Series driver in history and now makes the switch over to Formula V8 3.5, while Baptista continues with the team that took him to the EuroFormula Open Drivers’ title in 2015.

So far, Teo Martin Motorsport have only announced one of their drivers, with Japanese driver Yu Kanamaru moving full time in the series after stepping up from EuroFormula Open, while he also competed in a handful of races in Formula Renault 3.5 in 2015 with Pons Racing.

At the time of going to press, Strakka Racing and the Durango Racing Team have yet to announce either of their drivers, although the latter looks set to field former Auto GP gentleman racer Giuseppe Cipriani, the Italian having tested with the team in the last two pre-season tests.

Beitske Visser and Aleksander Bosak had been confirmed by Pons Racing to race for them before their withdrawal, with the former having tested with Strakka during one of the tests at Barcelona alongside Anglo-Danish driver Emil Bernstorff.

The one major change to the calendar sees the championship lose its coveted support slot at the Monaco Grand Prix, with the slot going instead to its former support series Eurocup Formula Renault 2.0.

As well as Monaco, the races that have lost their slot compared to the final Formula Renault 3.5 season are Le Mans and the Nurburgring.

The season begins and ends in Spain, with Motorland Aragon hosting the opener, before trips to the Hungaroring, Spa-Francorchamps, Paul Ricard, Silverstone, the Red Bull Ring and Monza before the final two weekends at Jerez and the Circuit de Catalunya. 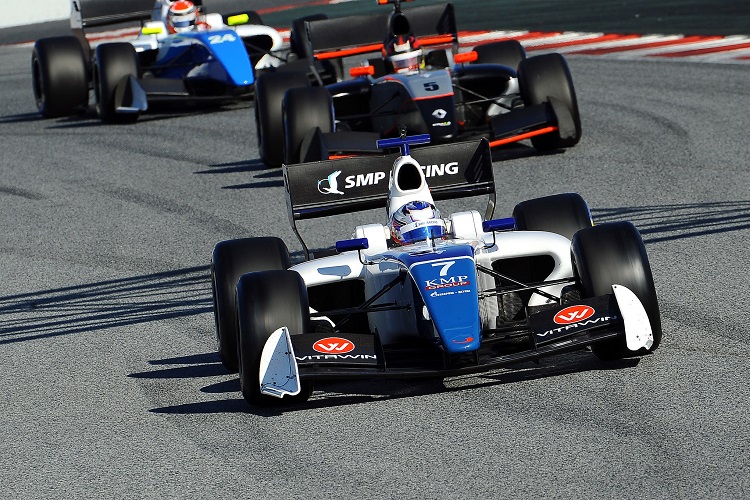 The championship may be under new leadership, with teams coming and going and a calendar changed from its predecessor, but the racing should still be as it was before – exciting and sometimes unpredictable.

There are talented drivers up and down the field, most of which will have hopes of making a championship challenge. The like of veterans like Vaxiviere and Dillmann, sophomore drivers like Orudzhev and Panis, and rookies like Deletraz and Baptista bodes well for a good season to come.

Yes, there is likely to be fewer cars on the grid, but still expect the racing to be as good as ever in a championship that has been under the spotlight for Formula 1 teams in recent years.

Fittipaldi and Delétraz announced as test and reserve drivers for Haas F1...