The FIA’s current superlicense points system, launched in 2014, was a curate’s egg of colossal proportions. On the one hand, it promised to make promotion to Formula 1 more meritocratic, end the endemic hindrance of ‘pay drivers’ and ensure young drivers, however talented, went through the proper junior series training. On the other hand, it was a thinly-veiled power grab, a governing body keen to regain control of the single-seater pyramid, with non-FIA series like Formula Renault 3.5 (the previous iteration of FV8 3.5) firmly in the crosshairs.

And yet, on second inspection, even some of the unlying assumptions of a points system appear intrinsically absurd. F1 teams do not hire drivers unless they are certain of the skill and preparedness of the youngster in question. Tens of millions are spent by F1’s powerhouse outfits nurturing and evaluating their proteges up the expensive rungs of the single-seater ladder. Helmut Marko does not require an arbitrary numerical scorecard to spot a driver with F1 potential or to dissuade him from promoting any more teenage sensations.

It isn’t even a good scorecard: the points are accrued through experience whereas every talent spotter in the paddock will be more interested in the steepness of the driver’s developmental curve. As a means for judging the suitability of F1 hopefuls, the system would relent at its first hurdle, with DTM champion Pascal Wehrlein not having the requisite forty points, but was sensibly allowed to race regardless. 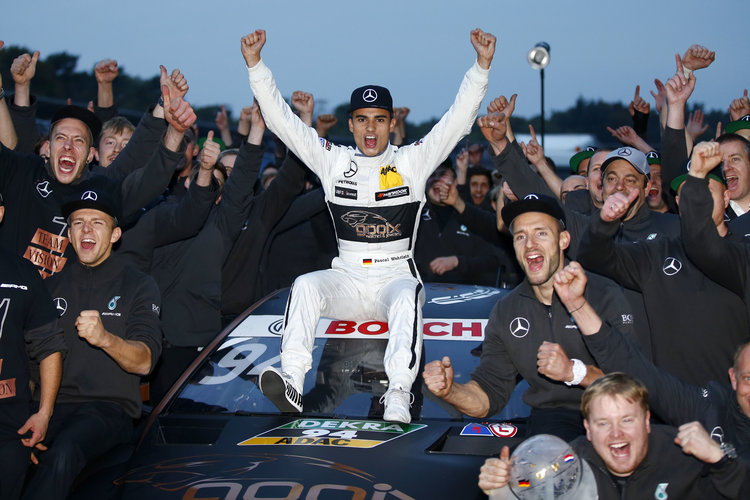 There have perhaps been more tangible consequences on the matter of ‘pay drivers’. The hiring of drivers who bring more money than talent is also not a misconduct to be discouraged, but a symptom of the abysmal deal the smaller teams are subjected to in the current Concorde Agreement. ‘Pay drivers’ have been a necessary means of self-preservation for some teams, not a preferential choice. It is not beyond the realms of possibility that had the Manor Team been able to offer a seat to the likes of Sean Gelael or Jordan King, it would have been on the grid in 2017.

However, a more direct casualty of the points system is Formula V8 3.5. This week’s news that the series will not return in 2018 is an announcement three years in the making; a death spiral that began with Renault’s disassociation with the series. For series so intrinsically branded around the path to F1, with an illustrious list of graduates such as Carlos Sainz Jr., Daniel Ricciardo and Robert Kubica, the fact that the Formula Renault 3.5 series champion was not automatically afforded enough points for a superlicense was both ridiculous and a death kiss.

Despite being strong-armed into withdrawing from 3.5 series racing, Renault had undeniably created an excellent series; building on the strengths of World Series by Nissan, FR3.5 arguably became the series of choice for the F1 junior outfits after the GP2 Series’ switch to Pirelli rubber. Without the spurious influence of unintelligible tyres, junior programmes could better track the essential transition into more powerful cars and observe how the driver copes with the extra throttle modulation. The FR3.5 car, the Dallara T12, generated more aerodynamic downforce than the Dallara GP2/11 and produced 82 fewer horsepower; a far less imposing prospect for any F3 or GP3 graduate.

Similarly, not being on-track on the same weekend as the grand prix circus, away from the direct gaze of paddock grandees and as the headline act on a much smaller stage, 3.5 series racing has also afforded F1 hopefuls a less pressurized environment in which to develop. That said, whilst he might not physically be in attendance at the circuit, no underperforming Red Bull junior could ever hide from Helmut Marko. On the flip side, a generous helping of pressure has also produced a fair few world class F1 drivers.

More broadly, 3.5 series racing tucked away a world class level of junior talent (as seen in this stellar contest between Stoffel Vandoorne, Kevin Magnussen and Antonio Felix da Costa) for the sole preserve of motorsport connoisseurs. For all of its technical failings (the farcical tyre degradation during last month’s F2 sprint race at Jerez is a classic example), GP2’s deep roots as F1’s support act made it the obvious blueprint for the FIA’s plans for its second-tier series, and accordingly, was rebranded FIA Formula 2 before the start of this season.

It is important not to overplay superlicense points as a politically-minded gambit. It has had political consequences and has significantly increased the FIA’s power over the single-seater ladder, but arguably it is nonetheless the justifiable means to some thoroughly admirable ends. In rather crudely killing-off the competition, the driving talent has become more concentrated in F2, which improves the racing, makes for a more rigorous schooling process and a more marketable platform.

Charlie Whiting has expressed Liberty Media’s ambition to create a linear MotoGP-style structure as a means for improving the development of young drivers. Hopefully, any ambitions to emulate the FIM’s junior framework will go hand-in-hand with increasing the visibility of the junior series in line with Moto2 and Moto3. It is ironic that some of the best racing of the grand prix weekend takes place in the relative anonymity of F1’s support acts. Opening the eyes of the world’s F1 fans to the regular side-orders of single-seater exhilaration on offer over a race weekend must surely be a key pillar of Liberty’s plan to improve the spectator experience.

FR3.5 was a fantastic platform for developing young drivers, in many respects better than GP2, but it became an obstacle to a more effective, rigorous and coherent single-seater pyramid. In spreading the junior talent more thinly, FR3.5 made the task of following the junior categories less intuitive for talent spotters and fans alike. Renault had little choice other than to drop the series. Following Renault’s withdrawal, RPM’s noble effort to continue the series was commendable, but the failure to attract any headline names for 2016 was a telling symptom of a terminal decline. The decision to lower the expectations of graduates resulted in an intelligently conceived alliance with the World Endurance Championship for 2017, and a guaranteed LMP1 test-outing for the champion.

But RPM could not forestall the inevitable; the writing has been on the wall for the various guises of 3.5 competition since 2012, when former FIA Single-Seater Commissioner, Gerhard Berger, set out to on the ongoing pursuit of a coherent pyramid structure in the junior series. Unquestionably, the FIA is directly responsible for the two-stage demise of 3.5 series racing; the points system has proven effective at only one thing: killing-off the competition. Indeed, it is such an otherwise flawed policy the FIA may feel inclined to abandon superlicense points now that the ploy’s target is a confirmed kill. By happy coincidence, the system has undeniably expanded the FIA’s power over single-seater racing, but it is also believably targeting tangible future improvements to the drivers’ and the fans’ experiences of junior series racing.