Seven Things to Watch For in Carrera Cup GB 2016

Media-day twelve months ago. It is almost time, to do it all over again. (Credit: Richard Pardon)

1: Can Cammish Defend His Title?

After taking eleven victories, sixteen podiums and the series title three races early, it was a surprise to see Dan Cammish return to defend his Porsche Carrera Cup GB title in 2016. Whilst Cammish is targeting an additional programme in Europe, all eyes will be on his British championship defence. It would be flippant to suggest that he will be as dominant as he was last season. With the return of Dino Zamparelli (GT Marques) and Tom Sharp (IDL Racing) both drivers who bested Dan in the final two meetings, the competition is equally as formidable as it was twelve months ago. In those final two meetings Cammish only took one win. That is not to suggest victories won’t come this season, they will. Just don’t assume it is cut and dried yet.

2: Can Charlie Eastwood Win a Race?

Charlie Eastwood has big boots to fill. Josh Webster won the title in his first year as a Scholar and finished third overall last season as well. The chances of Eastwood winning the title aren’t as favourable as they were for Webster. The grid is bigger and the talent levels deeper. That isn’t to do a disservice to Webster’s achievements, he drove supremely well to claim the title in his first season. Yet Eastwood will have to drive above and beyond that level to stay on the rostrum this season and seat time will be vital for an Irishman whose 2015 campaign was fragmented in Formula Renault. By the end of the season he should be fighting for race victories.

Eastwood is a part of the Redline super-team. (Credit: Richard Pardon)

3: Will Zamparelli Carry His Form Forward?

Dino Zamparelli struggled last season. Predicted to emulate fellow GP3 graduate Webster, Zamparelli just could not find pace in the opening meetings. A late season team switch to GT Marques unleashed his potential. At Silverstone, he flew, claiming two dominant race victories. Two third positions at Brands Hatch on the Grand Prix circuit rounded off his year in superb style. If anyone is going to take on Cammish over the full season, it should be Dino. Consistency will be vital. Being quick over two end of season meetings is one thing. The off-season has been a long one and Zamparelli will need to be on the pace from the word go to take the fight to Cammish and rivals.

4: Time for Ginetta Stars to Shine?

Tom Sharp is the last driver to win a Carrera Cup GB race. His performance on the Brands Hatch GP circuit last season was stunning. Second in race one and tailing Cammish for the whole race, then holding the champion at bay in a show of supreme defensive driving in the second encounter. Yet these results came at a circuit Sharp loves and the margins were tiny. He will need to have found a little extra pace to be a championship challenger this season.

Tom Oliphant has the advantage of being in the Redline Racing team that took Cammish to the title last season. Oliphant also has the reigning champion as a teammate and he comes off the back of an immensely successful Ginetta GT4 Supercup campaign where he took the title against strong opposition from TOCA package star Carl Breeze. He has had a decent amount of testing but the Type 991 GT3 Cup is a unique machine and it will be impossible to know if Oliphant is in a position to challenge until the first qualifying session is complete at Brands Hatch. However, as 2015 showed, qualifying on the Indy circuit can be deceptive… 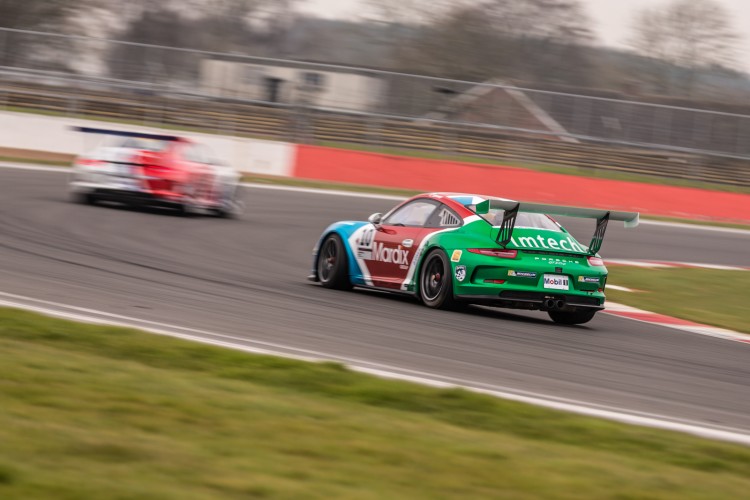 5: Will Jelley Bounce Back?

… as Stephen Jelley proved. A double-pole sitter at the opening round his year then fell apart, bested in both Brands Hatch Indy circuit races by Cammish. The pace then never seemed to return and a lacklustre campaign was one of the anomalies of last season. A former British Touring Car Championship race winner, Jelley has enjoyed success in the Carrera Cup GB in 2010 and is a driver to watch this season. He should have been able to regroup and come back stronger for Team Parker Racing, where he is now the lead entry with Josh Webster’s exit to the Blancpain GT Series Endurance Cup. However, he is also the only Pro entry for Parker and that could well hinder his campaign.

6: Who Will Lift the Rookie Cup?

The Rookie Cup became an unexpected focal point last season, with the battle between Sharp and Zamparelli an end of season highlight. The line-up this season includes ex- British GT driver Lewis Plato, scholar Charlie Eastwood, and Alessandro Latif whose career includes races at Bathurst and Daytona. Expect the fight for the £50,000 award to be monitored throughout this season, as it is likely to be the most hardly fought for prize that is on offer in the series. Eastwood or Plato should lead the way, both having the benefit of testing mileage and in Plato’s case, a season in more powerful GT machinery.

Pro-Am1 entries are currently thin on the ground and the three entries that were in attendance on media day were relatively spread-out. Dan McKay starts as a favourite for In2Racing and is capable of fighting the Pro drivers, as he showed over his limited appearances in 2015. Justin Sherwood was quick in 2014 and returns for an attack on the class title, although limited winter running is likely to hurt him. Sean Hudspeth was mired in the Pro-Am2 runners in the media day session but has the benefit of an established team with Parr Motorsport. This year has to be about gaining experience if nothing else.

John McCullagh should start the year as the clear favourite for the Pro-Am2 title and arguably should be in the Pro-Am1 classification this season. He ended the media day test session in twelfth, yet remarkably wasn’t the top runner from his class. That honour went to Euan McKay. McKay was nearly three-tenths faster than McCullagh, a brilliant performance over a short lap of the Silverstone National circuit and with limited experience of the GT3 Cup Porsche. Peter Jennings was also very close to McCullagh for G-Cat Racing and there is an argument to be made that the Pro-Am2 fight could be the tightest this season. Driving standards were a concern last year but hopefully series bosses can clamp down if such transgressions occur again this season.

Plato back on the Porsche Carrera Cup GB grid for 2021

By Vince Pettit
1 Mins read
After impressing in the season finale with Team Redline Racing, former Lamborghini champion Jake Rattenbury is back for a full season in Carrera Cup GB.