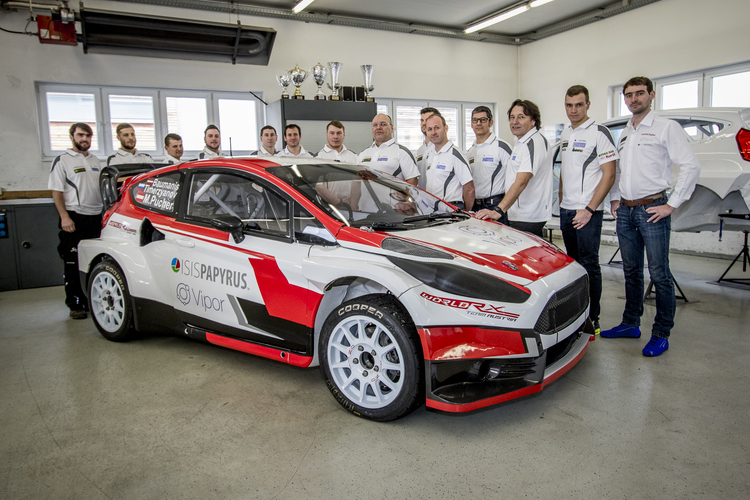 WorldRX Team Austria have been working hard since the end of last season and they are hoping that all of their hard work over the winter will pay off at Portugal for the opening weekend of the 2016 FIA World Rallycross Championship.

With both Janis Baumanis and Timur Timerzyanov signed for the 2016 World RX Season, the hard work begain when the teams Ford Fiesta’s returned from Argentina in late January. Since then, they have been working flat out to prepare for the team’s sophomore season. With Manfred Stohl now engineering the cars for 2016, Team Principle Max Pucher admits its been a challenge getting ready for this year, which has seen the team take a different approach:

“We take a totally different approach than last year,” confirms Pucher, “where we were kind of running it like a few rally stages. I realised at the end of the year that we need to take a circuit racing approach. It is not about just trying to drive faster, but the car has to be at optimal performance in engine and suspension at each and every outing. When you make a change, you must know before what it will do to the driving performance. It is impossible to be on top in this championship with the trial and error approach we had in 2015.”

However there is also clever thinking behind Pucher’s move to drive as a wildcard in three World RX events as well as the full 2016 FIA European Rallycross Championship as the Austrian lays out his expectations for 2016:

“I wanted to also compete with these fantastic drivers and work on my 2016 car setup. I have signed up for another three World RX races as a wildcard driver just to be part of it,” explains the Austrian. “I have high expectations for drivers, cars and the team, but we have to be realistic and be aware that so many things can go wrong on our first event. Our strategy will be to play our cards well, to be up there and make good championship points to keep everything open. It will be essential to stay out of trouble without major crashes or breakdowns but still drive a 100%. We will know more after the final!”

Two time European Rallycross Supercar Champion Timerzyanov is well aware of the challenge ahead for him this year:

“It will be difficult to compete with the large teams. They have huge experience and have done a lot of development on their cars. The drivers are just so good. I signed with Team Austria because they are young and eager to be on the podium and win races. I feel very much appreciated and can bring my experience to the table. We already made so much progress and I believe we are heading in the right direction. We are really happy to be where we are because Rallycross is destined to become a great, professional sport.”

Baumanis is confident of a good début season ahead of him and is already happy with the car:

“On the final test days when I got my new car with the new 2016 engine,” explained Baumanis. “I immediately felt the rush of power across the whole range. Yes, I could not hold myself back from smiling in the car for the last few rounds. We have changed the suspension substantially from last year and the race engineers are all circuit racing experts. They know about how to optimise the car each time we take it out. There is a lot of magic computing and mathematics going on.”