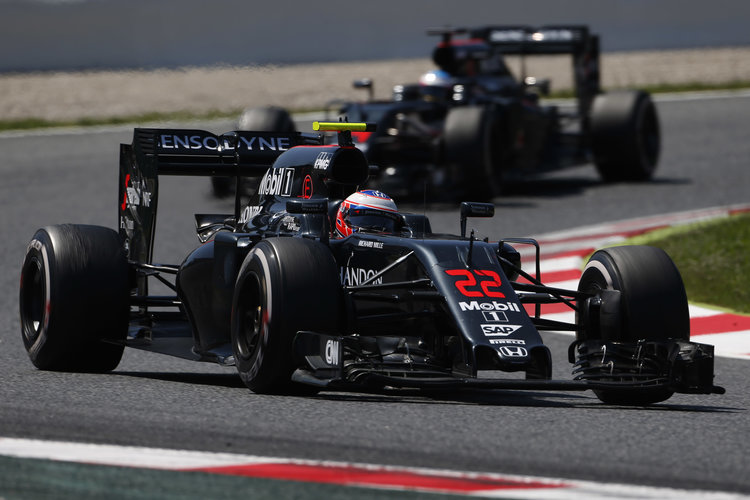 Jenson Button on track ahead of Fernando Alonso.

The McLaren Honda F1 team has taken the decision to only test some of the upgrades it has planned for the MP4-31 during the two day testing session at the Circuit de Barcelona – Catalunya this week.

The Woking based squad will not be trialling any of the PU hardware changes it had in the pipeline just yet, with the issues suffered by Fernando Alonso during the Spanish Grand Prix, which caused the double world champion to retire from his home race, a possible factor in their decision.

McLaren still has 14 tokens left at its disposal, and it is thought the team will use the first of these at the Canadian Grand Prix in just under a month’s time, when they will also receive a new batch of fuel and it will make more sense for drivers Jenson Button and Alonso to receive new engines.

Honda F1 chief Yusuke Hasegawa, advised when speaking to motorsport.com, that the delay in testing all their available developments is down to tactics rather than the upgrades not being ready to trial, and he is still not fully decided on which rounds will be the optimum races to release them to the team.

“I haven’t decided yet. Although we are developing all the time, if we don’t care about tokens we are ready to update. But I need to decide the tactics about which grand prix we have upgrades, so I cannot tell yet. We have no concrete plan. There is not a big hardware update [for Barcelona], but there are some control items.” he said.

Hasegawa also commented on how timing the upgrades to coincide with other developments was key to maximising their potential.

“We don’t need to use tokens for the fuel updates. Any time that it is ready, if we change the fuel we have to change the mapping: so also it is reasonable and effective to have the update timing to this as well.”

The one factor that could push the release forward, is if Alonso has to receive a new engine or components for the next round in Monaco, due to the power failure he suffered in Barcelona. If that were to be the case, then McLaren and Honda would be open to introducing developments earlier.

“We haven’t decided when the next engine will come but first we need to check Fernando’s engine is okay for Monaco.

“But we think it is fine. It was an unexpected mode switch that killed the engine. We don’t know the cause of that happening, but we think the engine itself can be used for the next race. We need to check the situation.” he added.

Portuguese GP – Friday Round Up: Bottas Tops Both Sessions After Two Dramatic Red Flags in FP2

By James Thomas
3 Mins read
It was an eventful three hours of running under the Portuguese sun today as Valtteri Bottas topped the timesheets in both free practice sessions.
Formula 1