Latest
Stanek fastest on new tyres in F3 practice
Alonso crashes as Dixon tops second day of 500 practice
Vandoorne claims Mercedes maiden Formula E win on home soil
Red Bull Aim to Keep Momentum Going in the Barcelona Heat
Vandoorne on pole for final race of the season
McLaren F1 team expecting a challenging race in the Spanish heat
Haas ‘looking forward’ to assessing car progress in Barcelona
Renault and Ferrari to appeal Racing Point punishment after copying scandal
Pérez Back Behind the Wheel for Barcelona Weekend after Negative Coronavirus Test
Mercedes’ Toto Wolff: “The points are given out on Sunday and that’s when we struggled”
Porsche Mobil 1 Supercup

The Porsche Mobil1 Supercup will feel a little different in 2016. Whilst the front-end of the grid is missing reigning champion Philipp Eng, now a BMW works driver in the Blancpain GT Series Sprint Cup, it is the middle to lower end of the twenty-four car strong field where sweeping change has come.

However the front end of the grid remains, in general, re-assuringly familiar. Running #1 and #2 for the Lechner MSG Racing Team as a portion of Walter Lechner’s eponymous squad is titled for 2016, are Michael Ammermüller and Sven Müller. Both drivers have won multiple Supercup races and the latter launched an extraordinary late season charge in 2015 featuring victories at the Hungaroring, Spa-Francorchamps and Monza. Only a tardy first half of the season, where Müller retired twice and then scraped two-tens, killed his championship bid.

Ammermüller was the more consistent of the two, but lacked the outright pace and only won once in Barcelona. The men most likely then… Well…

That would be to dismiss Christian Engelhart, MRS GT – Racing’s lead candidate for the top step in 2016. Engelhart had a similar season to Ammermüller, they finished equal on points following the final race at the Circuit of the Americas. Ben Barker enters his fourth Supercup season, again behind the wheel of the MOMO-Megatron Team PARTRAX car and this year must be the one where Barker becomes a regular podium contender. The pace was there in 2015, the luck missing more often than not.

Barker is joined at the MOMO squad by Paul Rees, a Porsche Carrera Cup GB race winner and a fascinating sub-plot to this season’s narrative. Rarely the outright fastest in the UK, Rees was always there or thereabouts and will surprise some of the Supercup regulars. 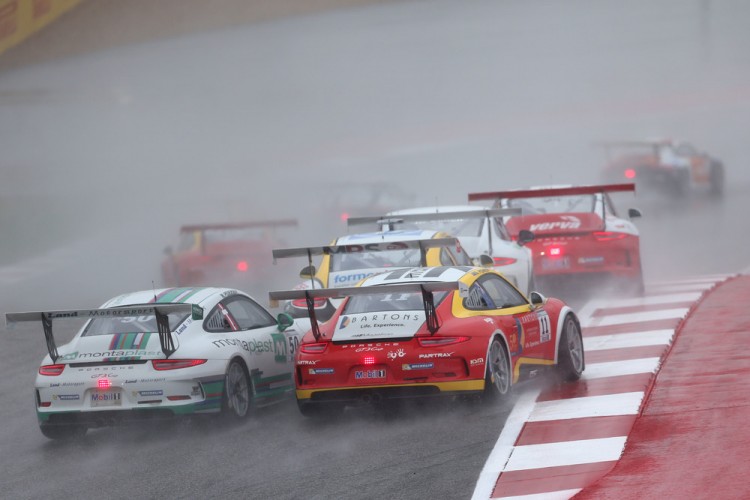 Santiago Creel joins FÖRCH Racing by Lukas Motorsport following some varied Porsche racing in his Mexican homeland, whilst Patrick Eisemann will look to build on a season’s Supercup experience for the same team.

Robert Lukas has been racing one-make Porsches for nine years and is by far and away the FÖRCH operation’s lead candidate for success. Regular top-tens last season went unrewarded due to DNFs, so staying out of trouble in the typically ferocious mid-pack racing will be key this year. Chris Bauer runs the #9 and is the final entry from the Lukas Motorsport run team. His third year in the Supercup needs better results than the occasional top-twenty he returned with last season.

Back to the MOMO-Megatron squad, where Barker and Rees are joined by Dylan Pereira, the eighteen year old from Luxembourg with about as limited an experience on his CV as your likely to find in international motor sport. Further comment withheld until everyone is in action at the Circuit de Catalunya this weekend.

The MRS team is the largest on the entry for 2016. Alongside Engelhart there is Roar Lindland, who has been racing Porsche machinery since 2008. Most fascinating of all is Victor Jiménez, a loss to Carrera Cup GB but a fascinating addition the Supercup grid for this season. A regular front-runner and always harassing more experienced racers in the UK, Jiménez will revel in the atmosphere in front of his home grand prix crowd this weekend.

Christof Langer runs under the MRS-Cup Racing banner and fits into the Gentleman end of the Supercup spectrum. Mikkel O. Pedersen is another teenager, one who only started racing back in 2012. Yet he has evident potential and is an enticing proposition for this year. Kenji Kobayashi rounds out the MRS contingent, a guest star racing intermittently for this season.

Onto Steven Palette, third in Carrera Cup France 2015 and one of Martinet by Almeras’ strongest contenders. He is joined by Roland Berville and Glauco Solieri, again representing the slightly more mature generation. However, the most interesting of the quartet is Mathieu Jaminet, who bested Palette in the Carrera Cup France to finish runner-up last season and is blessed with Porsche factory backing in 2016.

FACH Auto Tech are a slimline entry for 2016, running two cars for two of the young stars of the series. Italian Matteo Cairoli mixed blistering pace with the occasional embarrassing error last year but one extra year of racing should mean a slightly cooler and more calculating driver. A championship contender? It may well happen. He is joined by Philipp Frommenwiler, whose targets will only be set slightly lower than his Italian teammate’s. Podiums are possible.

Lechner Racing Middle East features our final three contenders. Zaid Ashkanani represents Kuwait for a full-season, Jeffrey Schmidt is a current Porsche champion in the Middle East Cup Challenge and strong Supercup results are now an expectation, and Ryan Cullen jumps across from the Carrera Cup GB and will look to make progress after a half-season in Supercup in 2015.

There is something a bit different about the Porsche Mobil1 Supercup in 2016. The front of the field feels familiar but the true question lies in which of the many and varied young-guns will appear on the top-step of the rostrum, and when. The calendar remains unchanged and therefore experience remains paramount. This may well be the sort of season where one driver could dominate, or one where the contenders emerge from unexpected places. Sven Müller stands as a TCF Man Most Likely but Matteo Cairoli will surprise many.

Pereira leads the way as Supercup heads to Austria