Solberg in control after World RX of Great Britain Q1 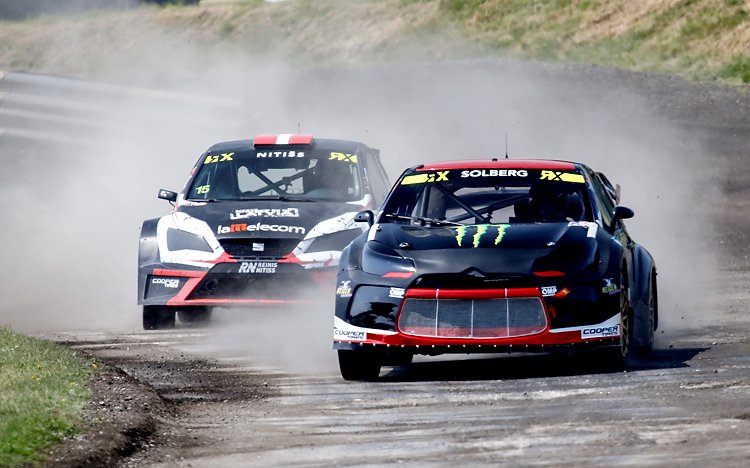 Petter Solberg leads the morning action from day 1 of the World RX of Great Britain after topping the times in Q1 ahead of championship leader Mattias Ekström.

The first race of Q1 saw Janis Baumanis line up alongside Anton Marklund and Davy Jeanney. Marklund would get the jump on the pack to take the lead and wouldn’t look back as he held of for victory ahead of Baumanis and Jeanney, who slowly brought the Team Hansen Peugeot 208WRX home after suffering a turbo issue. Marklund’s time would be good enough to take him to third place in Q1 while Baumanis took sixth and Jeanny was classed as the final finisher in twentieth place.

For the second race Reinis Nitiss had the inside line alongside Petter Solberg, Robin Larsson and Liam Doran. A jumpstart from the British Bomb would force him to take two joker laps, effectively putting him out of the running. As the race started Solberg took the holeshot and immediately started pulling away from the pack ahead of Nittis and Larsson. Solberg only briefly lost the lead when he took his joker lap but normal service resumed as Nitiss took his joker lap; this saw the Latvian drop behind Larsson for the chequered flag. Solberg’s race time was the fastest of Q1, Larsson tenth and Nitiss in thirteenth; Doran finished a lowly nineteenth place.

It was a bad day for the Brits as Guy Wilks also jumped the start in the third race as he was joined by Niclas Grönholm, Timer Timerzyanov, Kevin Eriksson and Ken Block. Despite the prospect of the penalty Wilks pushed on; Gronholm took the lead in to the first corner as Ericsson and Timerzyanov took an early joker lap. Wilks and Block went side-to-side through the first corner with the American losing out as he was forced wide. The two would stay closer throughout the race until the Brit was forced to take his penalty. A bold move by Timerzyanov saw the Russian overtake Eriksson, a move that would see the World RX Team Austria driver take the heat victory. Timerzyanov would take ninth place in the overall standings, Gronholm twelfth, Ericsson fifteenth, Block sixteenth and finally Wilks in eighteenth.

Ekström gets the jump on Foust – Credit: RubberDuckDoes.com/Matt Bristow

The fourth race was dominated by championship leader Mattias Ekström who led from start to finish. there was drama on the second lap though as British Rallycross frontrunner Julian Godfrey rolled his Ford Fiesta coming out of the joker lap, his car coming to a rest on the outside bank while the action continued. Tanner Foust lost out to Kevin Hansen as the Team Peugeot-Hansen driver got the jump on him through the joker lap. René Münich suffered issues throughout the race and retired early. Ekström secured second place in the overall standings, Kevin Hansen seventh, Foust fourteenth while Godfrey and Münich were classified as non-finishers.

Godfrey was lucky to escape without injury after rolling his Fiesta – Credit: RubberDuckDoes.com / Matt Bristow

The final race of Q1 saw Johan Kristofferson line up on the inside line alongside Andreas Bakkerud, Sébastien Loeb, Timmy Hansen and Topi Heikkinen. Kristofferson and Bakkerud would battle it out through the race as they went in to the first corner side-by-side. Kristofferson had the early advantage before a slightly slower joker lap would see Bakkerud take lead for a popular victory on the final lap. Sébastien Loeb suffered a power cut on the third lap that would drop him down the order. Bakkerud finished strong with a time that took him to fourth place in the Q1 standings, just ahead of Kristofferson. Heikkinen took seventh place with Timmy Hansen in eleventh; Loeb would end the morning in a lowly seventeenth place.

In the RX Lites it was Frenchman Cyril Raymond who lead the way ahead of Thomas Bryntesson and Joachim Hvaal. British RX Lites debutant Dan Rooke would end his first Q1 session in ninth place.

The Super1600 class would see Ulrik Linnemann march on to finish at the top of the timesheet ahead of Kristin Szabó and Artis Baumanis.

IMG to Quit World RX Promotion at End of Season