The 24 Hours of Le Mans is one of the most prestigious races in the world.  It is the ultimate challenge for the teams and drivers  selected to take part in the race by the events organisers – the Automobile Club de l’Ouest.

This year’s race is the 84th running of the event, it sees 60 cars and 180 drivers shoot for glory across four categories and for the first time, a team from Singapore will make up one of those entries.

Formed in 2007 by Singapore-born Malaysian Mok Weng Sun, and known then as ‘Team Porsche Club Singapore Racing‘ campaigning a Porsche 997 RSR, they established themselves in a short period of time and won the 2008 Sepang Twelve hour race and have not been strangers to success since.  They have become one of the most successful operations in GT Asia competition with an illustrious record that boasts three GT Asia team and driver titles since 2011, three overall victories at the MME Sepang Twelve hour events (2008, 2013 and 2014) and the Asian Le Mans Series championship.

Fielding a Ferrari 458 Italia GT3 as the car of choice for much of their history, the Asian Le Mans campaign was won with a McLaren 650S GT3, however because this car is ineligible under current ACO regulations (there is no GTE version of the McLaren), they will revert back to a Ferrari 458 Italia for the Twenty Four hours of Le Mans to fulfill the requirements of the GTE-Am category.  The team will also have assistance from AF Corse, providing technical and logistical support, and also the very same car that took the GTE Pro win at the race last year!

With their GT Racing pedigree, knowledge of the prancing horse and an impressive driver lineup of Britain Rob Bell, a McLaren factory driver and twice Le Mans Series GT champion, owner-driver Mok, who has three GT Asia titles to his name, and double Macau GT Cup winner Keita Sawa, it would not be a crazy notion to suggest that a clean and reliable race from the eye-catching chrome and orange #61 Ferrari could yield a podium finish from a class of thirteen very strong cars.

Mok Weng Sun has steered his team to the top-level of endurance racing by qualifying for this year’s great race but was cautious with his response when The Checkered Flag asked him about his hopes for the weekend:

“To be absolutely candid, we’ve only ever attempted a twenty-four hour race once before, that occasion being the twenty-four hours of Dubai in 2008.  Racing at Le Mans is a completely different kettle of fish!  Realistically, just finishing the race will be a big accomplishment, but I think a top five finish in a field this competitive would absolutely make my year!” 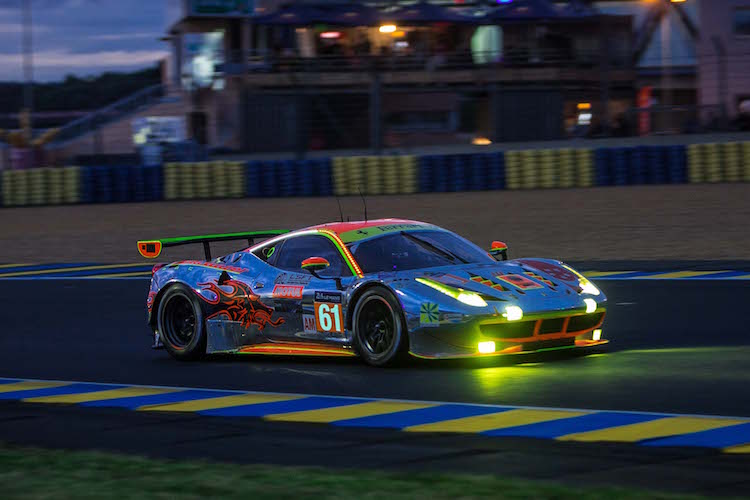 Clearwater Racing will be the first Singaporean team to take on Le Mans (Credit: Craig Robertson/SpeedChills.com)

Although the team are supported by AF Corse for the twenty-four hours of Le Mans, they remain very much loyal to their Asian roots, with most of the Clearwater Racing crew being Singaporeans and Malaysians.  Being a Singapore-registered team and very much flying the flag for his country on the world stage at Le Mans is not lost on Mok Weng Sun when asked about the gravity and significance of their achievement for the country.

“It has always been my intention to raise the awareness of motorsports, other than F1, in Singapore as a whole,” Mok Said. “We are very proud, very proud to be the first Singaporean team to qualify for Le Mans and I must say the reception from the press has been just fabulous.  We’re hoping that a good showing at this year’s race will lead to even more support and possibly even bring a few sponsors on board for another possible assault next year!”

The team will continue to compete back at home on Asian soil after the dust of Le Mans has settled.  They have already taken part in the opening round of the GT Asia Series which comprised of two races in South Korea at the Korea International Circuit.  Mok and team-mate Richard Wee drove the team’s brand new Ferrari 488 GT3 to eighth and tenth place respectively.

Mok certainly believes that interest in Asia for sportscar racing is growing, and that their involvement at the 24 hours of Le Mans and the ACO organised AsLMS will help continue the growth and momentum of the sport.

“Already we have heard rumours of multiple new entries in the GT class for this seasons Asian Le Mans Series!” He said. “This can only be a good thing as far as the future of our sport in Asia is concerned.”

When asked if he had any thoughts of a possible full-time FIA World Endurance Championship campaign for Clearwater Racing in the future, Mok Weng Sun understandably didn’t give too much away: “It’s a nice thought but these are questions for another time, after we’ve finished our first attempt at Le Mans.  For the moment, all I can think of is the challenge of La Sarthe.

“It has consumed me for the past five months.  I hope to have wonderful news to report when the flag drops at 3pm on Sunday”.

By Fergus Mckie
4 Mins read
The FIA has released the full entry list for the 2021 FIA World Endurance Championship.