After an exciting 24 hours of Spa, Audi have been reflecting on the race that saw them take the final podium positon and also the ‘Coupe du Roi‘.

Audi Sport Team Phoenix looked strong in the closing stages of the race, before a tyre failure took them out of the running. This handed over the German marques best chances to the Audi Sport Team WRT from Belgium with Nico Müller, René Rast and Laurens Vanthoor taking third.

A total of eleven cars across all three categories were fieled by four teams, this enabled Audi to take the most points in the manufacturers’ classification to secure the prestigious ‘Coupe du Roi’ for a third time in succession.

Despite the Audi Sport Team WRT making it to the podium, it wasn’t easy going for the team. After starting the race from pole position the team were forced to make a lengthy pit stop five and a half hours in to the race as a competitor slid in to the rear of the Audi R8 LMS. With the repairs made the team found themselves down in forty-second place and three laps down on the leaders. Aided by changing weather conditions and full course yellows, the team fought their way back through the field, with Vanthoor setting the fastest lap of the race.

“That was hard work. Congratulations to the Belgian Audi Club Team WRT and its drivers who never gave up,” said Chris Reinke, Head of Audi Sport customer racing. “They fought hard and fair for a podium finish, which our second factory supported team would have deserved as well.” 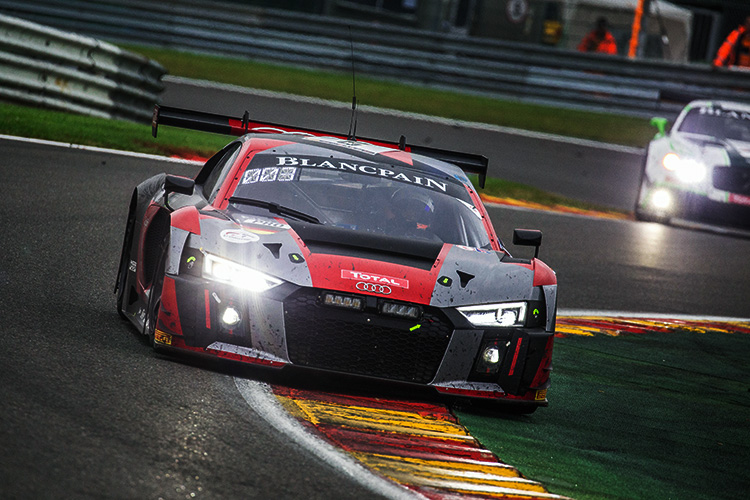 Team Phoenix looked set for victory until a tyre problem took them out – Credit: Craig Robertson/Racephotography.net

Audi Sport Team Phoenix lead the race as it entered the final quarter with the driver line up of Christopher Mies, Frank Stippler, and Markus Winkelhock, a tyre failure caused a fire on the R8 LMS which would see the team retire from the race early.

Seventh position through to ninth were occupied by Audi’s with Saintéloc Racing securing seventh place, Team WRT in eighth and Team I.S.R. in ninth place. The result means that Audi cemented the position in the top ten with the most cars of any brand.

“Our teams gave their all and represented the Audi brand well at Spa,” concluded Reinke. “We wish them as well as our other customer teams contesting other championships continued success throughout the remainder of the season. This year several of our customer teams are still fighting around the world for championship titles.”

By Josh Disborough
1 Mins read
Sky Tempesta Racing have announced that they are going to return to the Fanatec GT World Challenge Europe Powered by AWS for the 2021 season to defend their Pro-Am title double from last year.