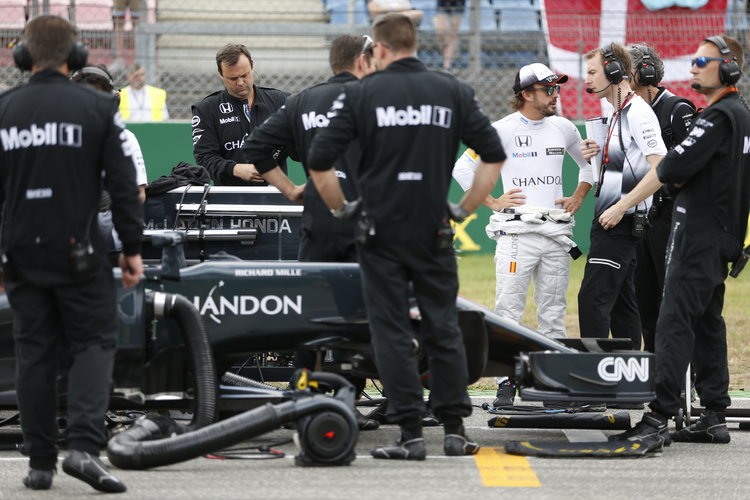 McLaren-Honda F1 Team driver Fernando Alonso had to sit out the majority of the first practice session of the Belgian Grand Prix weekend, after experiencing a water leak on the newly updated power unit the Woking based squad had introduced in Belgium.

The Spaniard, who spent most of FP1 in the garage whilst mechanics worked on fixing his engine issue, will now have to switch back to an older specification unit so as not to incur any penalties ahead of Sunday’s race, and to allow him the chance of running during FP2 later this afternoon.

The change will mean that the double world champion will not experience the benefit of the Honda engine update, however that may not leave him at much of a disadvantage, as team-mate Jenson Button believes improvements from the upgrade will come at later races, rather than this weekend where the track does not particularly suit them.

Speaking in the press conference on Thursday, the Brit explained his thinking.

“It is a good little boost, which is nice, but it is not going to move us up the grid I would say, only because this was always going to be a tricky one for us.

“I think it will probably leave us in the same place as Hockenheim, which is still positive, and probably the same at Monza.

“When we get to the circuits like Singapore it will probably give us a bigger boost than circuits like here – well, not a boost, but not have the negatives that we do at a circuit like here. I am looking forward to it.”

By Nick Golding
1 Mins read
Red Bull Racing have announced an exclusive multi-year partnership with well-known gambling and entertainment company PokerStars ahead of the 2022 season.
Formula 1

By Nick Golding
1 Mins read
With a new name, logo, car and driver line-up for 2022, the Alfa Romeo F1 Team ORLEN are looking well prepared for the upcoming pre-season test at the end of next month.
Formula 1

By Paul Hensby
1 Mins read
Revisions to the Albert Park track are likely to make the circuit around five seconds a lap faster, according to the CEO of the Australian Grand Prix Corporation, Andrew Westacott.