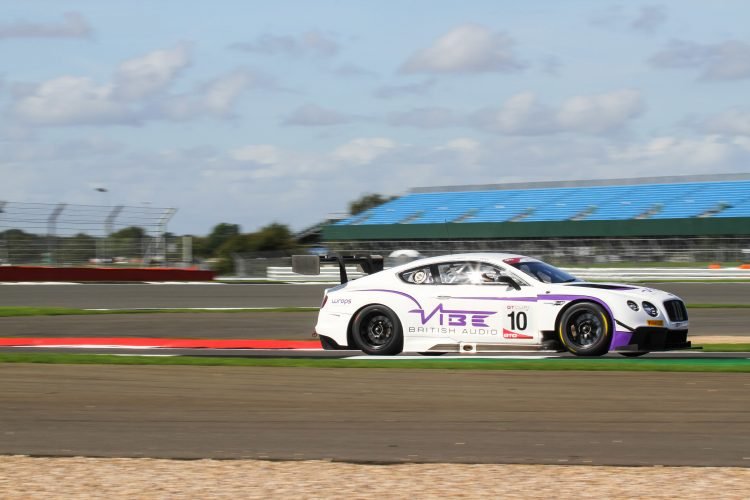 Jordan Witt took his second pole position of the weekend at Silverstone heading into round 20 of the GT Cup Championship. Witt was over three and a half seconds faster than his nearest rival John Dhillon and Aaron Scott in the Ferrari 458 GT3.

Yesterday’s double race winner, Graham Davidson qualified a brilliant third place in the McLaren MP4-12C three tenths behind Dhillon and Scott. Third on the grid will give an excellent opportunity to challenge for the victory in the third and final race of the weekend.

Driving the GTO class Bentley Continental GT3, Witt looked in complete control of qualifying and was not troubled throughout the session.

Mike Wilds and Anthony Wilds were fastest in the GTC class, fourth overall, but were just under three tenths ahead of Andy Demetriou and Piers Masarati in the GTC class Porsche 991 GT3 Cup.

In the GTB class Tom Webb and James Webb were once again the fastest in the class albeit in eighth place, driving the BMW M3 E46 GTR on a beautiful day at Silverstone they were eight tenths faster than their nearest class member.

Qualifying was red flagged after an incident with Dave Cooper and Jason Dixon in the BMW M3 E46 GTR, but the red flagged didn’t hinder any of the drivers and with 13 minutes still left to run. It gave the drivers plenty of time to improve.

The fastest in the GTA class was Daniel O’Brien in the Ginetta G55, the beautiful conditions allowed the drivers to push the limit of grip to the maximum.

Nigel Hudson and Adam Wilcox qualified in sixth place while Pete Littler was a place behind in the Aston Martin.

After a tricky Saturday, Witt will look to get back to winning ways, but with the success seconds that he will have to take could hinder his title push.

Starting alongside Witt, Dhillon and Scott will look to take their first win of the weekend but the success seconds could play a huge part in the outcome of the race.