Latest
Hamilton has ‘work to do’ as Mercedes left wondering about Friday pace
Latifi rues narrowly missing out on points at Austrian Grand Prix
Wolff: Reliability is ‘our highest priority’ for the Styrian Grand Prix
Renault’s Pilbeam positive ahead of Styrian GP
Ocon – “We have another opportunity this weekend to do even better”
Renault’s Riccardo – “We want to be in a position to capitalise on any opportunity”
Rosenqvist sees a “Perfect scenario” to turn season around at Road America
Preview: 2020 Formula 1 Styrian Grand Prix – Red Bull Ring
Verstappen Leads Free Practice 2 Charge
Mugello and Sochi Added to 2020 Formula 1 Season
Formula 1

Other safety concerns should be addressed before Halo – Magnussen 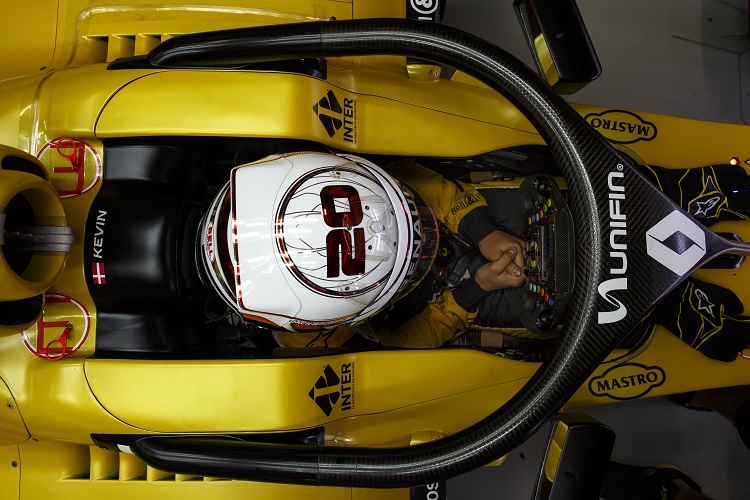 Kevin Magnussen has admitted that he is not a fan of the proposed Halo head protection system, and feels that there are other safety concerns that should be addressed.

The Dane ran during the opening free practice session at the Autodromo Hermanos Rodriguez with the system attached to his Renault Sport Formula 1 Team RS16, but revealed that he was not that happy with the Halo, and believes tracks with elevation changes could pose a problem for it.

“Not a big fan,” said Magnussen about the Halo in Mexico on f1i.com. “It feels weird to have something in front of you. It is like having a cap (with the brim) pulled down really far. You can see where you are walking, but you can’t see anything else.

“I don’t like it. The visibility is not as good as I hoped. So I think at tracks where there is elevation it is going to be a problem.”

Magnussen believes Formula 1 officials should be looking into other safety concerns that he feels need to be addressed, including the long time debate about whether gravel or tarmac should be used in run-off areas, before the Halo gets introduced.

“I’m sure we all have our own opinion, but my opinion is that there are perhaps other things that need to be looked at before something like a halo or a closed cockpit or a canopy screen or whatever,” said Magnussen.

“Tracks. Gravel in many places. What we have done with the Virtual Safety car when there are trucks on the track is very good. And anyway that accident with Jules [Bianchi] would not have been any different if he had had a halo. So I think the halo would work in a situation if you had a wheel hit the head or maybe a nose cone, which is what happened with Justin Wilson.

Ocon – “We have another opportunity this weekend to do even better”

Renault’s Riccardo – “We want to be in a position to capitalise...

Magnussen – “The positive was the pace I had”