Porsche claimed pole position ahead of the Shanghai round of the FIA World Endurance Championship.

With team-mate Timo Bernhard watching on from the garage, Mark Webber and Brendon Hartley set the fastest average time during a close 20 minute session to clinch the second pole of the year for their 919 Hybrid.

The last pole position for the #1 Porsche occurred at the 6 Hours of Spa in May.

Hartley turned in the quickest time during the first set of runs, but a track limits violation meant his effort was deleted by the stewards.

Crucially, the notification came after Hartley had given the car to Webber for the second run, meaning Webber had only enough time for one flying lap before handing back to his team-mate.

Second on Sunday’s grid will be the Toyota TS050 qualified by Sebastien Buemi and Kazuki Nakajima and also driven by Anthony Davidson.

Buemi started brightly, setting the quickest time during the opening runs following Hartley’s misdemeanour, before Nakajima consolidated to result in an average time of 1:44.452s.

Toyota sent Buemi out for one final crack at what would have been the team’s first pole of 2016, but a slower LMP2 car at the final corner meant the Swiss driver fell just 0.060 seconds short.

Third on the grid will be the Audi R18 shared by Lucas di Grassi, Oliver Jarvis and Loic Duval.

In a similar strategy to Toyota, Audi brought Jarvis back out for the final two minutes after the British driver banked a legitimate time on his opening flyer.

The championship-leading Porsche of Neel Jani, Marc Lieb and Romain Dumas started the session near the top, but a penalty against Jani for exceeding the 919 Hybrid’s allocated fuel flow rate meant the Swiss driver’s best lap was deleted. 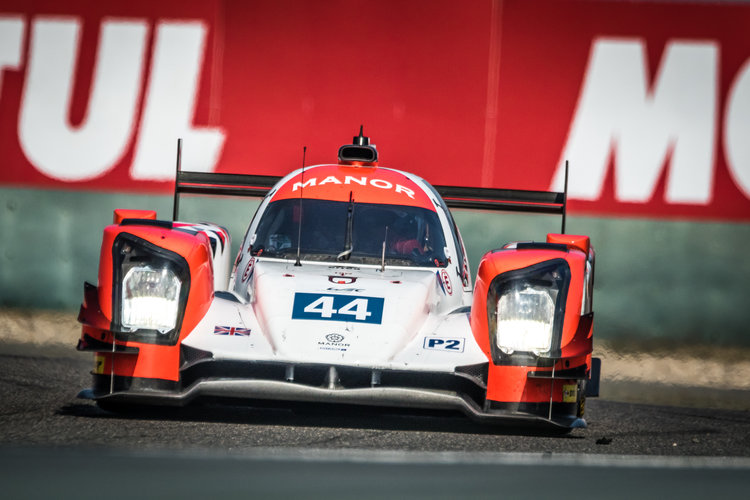 Manor’s Brit squad had the measure of the class (Credit: Adrenal Media)

In LMP2, Manor secured its best qualifying result of the season with Matt Rao and Alex Lynn taking their first-ever WEC pole positions.

The British pair will be joined during Sunday’s race by Richard Bradley.

Signatech Alpine led the first set of runs initially thanks to a quick lap by Nicolas Lapierre, but a 1:53.775 from Lynn – the second fastest attempt of the session – lifted the #44 ORECA 05-Nissan to the top of the order with an average time of 1:54.225s.

Lapierre and team-mate Gustavo Menezes settled for second, 0.157 seconds down, while Extreme Speed Motorsports completed the top three with its Ligier.

Sean Gelael and Tom Blomqvist combined well for the first time to score a 1:54.398s average.

The ESM pair finished marginally ahead of the G-Drive Racing ORECA 05-Nissan and the RGR Sport by Morand Ligier JSP2.

Andy Priaulx and Harry Tincknell beat the sister car driven by Olivier Pla and Stefan Muecke to secure their first pole position of the season.

The all-British crew submitted an average score of 2:01.391s; enough to beat the Fuji pole-sitters by 0.137 seconds.

The only other GTE car able to mount a challenge to the two Fords was the #95 Aston Martin, piloted by Nicki Thiim and Marco Sorensen.

Aston’s ‘Dane Train’ was running with a slightly enlarged air restrictor following its drop in pace at Fuji, with Thiim and Sorensen showing improved pace to end on a 2:02.040s average.

Fourth in GTE-Pro was the first of the two AF Corse-run Ferrari 488s, which suffered a late balance of performance decision resulting in its pre-Shanghai boost pressure increase rescinded by the ACO (full story at Sportscar365.com here).

Gianmaria Bruni and James Calado could only get to within 0.924 seconds of the pole time despite leading comfortably during Friday practice.

Completing the top five in class was the sister Aston Martin of Richie Stanaway and Darren Turner.

In GTE-Am, Aston Martin Racing notched up its fifth pole position of 2016 thanks to a dominant run by Pedro Lamy and Paul Dalla Lana.

The 6 Hours of Fuji – round seven of the 2016 FIA World Endurance Championship – takes place tomorrow (Sunday, November 6) at 11:00 local time.

By Paul Hensby
3 Mins read
Peugeot Sport has confirmed it will return to top level endurance racing in 2022 with its 508 Hypercar.
24 Hours of Le MansFIA WEC

Emanuele Pirro as Grand Marshal for 24 Hours of Le Mans

By Vince Pettit
2 Mins read
Six rounds for the 2021 season of the FIA World Endurance Championship have been proposed with Sebring leading the way in March.