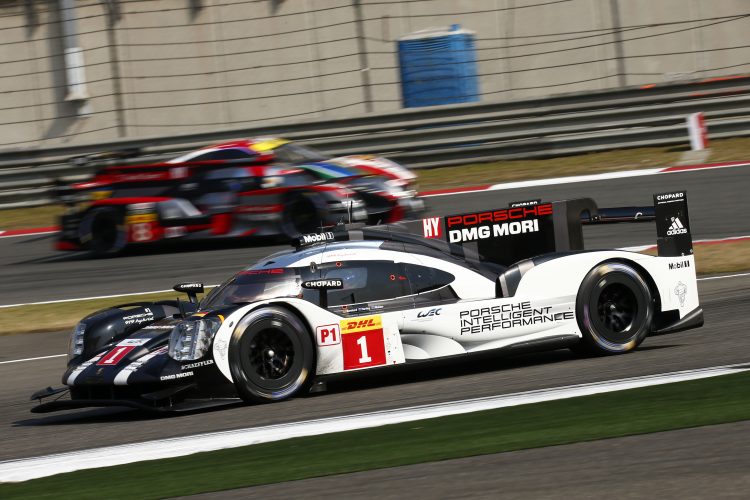 Porsche clinched its second consecutive FIA World Endurance Championship manufacturers title with a dominant victory at the 6 Hours of Shanghai.

Mark Webber, Brendon Hartley and Timo Bernard were never challenged in their run to the flag from pole position.

The #1 Porsche 919 Hybrid crossed the line 59 seconds ahead of the Toyota TS050 driven by Kamui Kobayashi, Stephane Sarrazin and Mike Conway.

A nightmare run for both Audi R18s – which finished fifth and sixth respectively – handed the manufacturers title to Porsche with one race to spare.

Third place went to the sister Toyota shared by Anthony Davidson, Sebastien Buemi and Kazuki Nakajima which is still in the drivers’ title hunt.

It was a textbook display from the #1 Porsche crew, following on from Webber and Hartley’s pole position on Saturday.

Aside from during pit stops, Hartley only relinquished the lead once during his opening stint when Buemi made a sweeping move around the outside at the first corner.

The sheer pace of the Porsche 919 Hybrid on the straights meant Hartley was able to get the position back before the end of the opening lap.

Hartley double stinted his first set of tyres to build up a 20 second lead at the second round of pit stops.

The Porsche crew lost time when the front nosecone of the #1 car had to be changed, but Bernhard soon levelled out the original advantage with a solid middle stint.

An equally strong anchor leg from Webber, followed by Hartley’s run to the flag, capped a near-perfect weekend for the Porsche team.

Toyota had the pace to match Porsche during the meaty section of the race, but the Ts050S were unable to mount a realistic challenge on the leader.

They did, however, jointly dispatch the #2 Porsche of championship leaders Neel Jani, Marc Lieb and Romain Dumas.

A brilliant duel between Kobayashi and Jani during the third hour resulted in the Japanese driver taking the position, before Buemi did the same two hours later.

Toyota confirmed its places above the #2 919 Hybrid with a crafty call at its final pit stop.

Both TS050s opted to forgo tyres to save time in the pits, which brought both cars out ahead of the Porsche in an order which held until the finish.

That result means the #2 Porsche crew’s championship lead has been cut to 17 points by the Kobayashi/Sarrazin/Conway Toyota, with just one round in Bahrain to go.

Completing the top five was the #8 Audi R18, which finished three laps off the leader.

The Audi mechanics were unable to put enough fuel into their car at each stop, and when they eventually did the task took about 30 seconds to complete.

Contact between the two Audis during the second half of the race curtailed the effort of the other R18 driven by Andre Lotterer, Benoit Treluyer and Marcel Fassler.

The touch, which occurred at the Turn 14 hairpin, broke an air connector in the #7 Audi which relegated it to the pits for 25 minutes (or 14 laps) where repairs took place. The car eventually finished sixth.

Seventh place and first in the LMP1 privateer category was the ByKolles Racing CLM P1/01, which notched up its first class win of the season after the Rebellion Racing entry hit mechanical trouble.

In LMP2, G-Drive Racing won by over a lap as Signatech Alpine secured its first world championship with a fourth place finish.

The Jota Sport/G-Drive association continued its Fuji form to dominate the race with Alex Brundle, Will Stevens and Roman Rusinov driving the orange ORECA 05-Nissan.

An excellent first stint from Brundle, who got past the Alpine of Nicolas Lapierre and the pole-sitting Manor ORECA of Alex Lynn, set up a flawless run for the Anglo-Russian team.

Stevens ultimately crossed the line one lap ahead of the Extreme Speed Motorsports Ligier JSP2 of Antonio Giovinazzi, Sean Gelael and Tom Blomqvist which executed a competitive alternate strategy.

Rounding out the podium was the RGR Sport by Morand Ligier JSP2 driven by Bruno Senna, Ricardo Gonzalez and Filipe Albuquerque.

Albuquerque took the position on the final lap when he got past Lapierre in the Alpine amongst traffic.

Lapierre, Gustavo Menezes and Stephane Richelmi can now head to the 6 Hours of Bahrain with the confidence of knowing that they are the 2016 champions.

GTE-Pro saw Ford Chip Ganassi Racing dominate at the head of the field, with Andy Priaulx and Harry Tincknell carrying out a lights-to-flag win from pole.

The British duo beat the sister Ford, driven by Stefan Muecke and Olivier Pla, by 50 seconds.

Muecke and Pla had to recover from a slow puncture during the third hour which dropped them behind the #51 AF Corse Ferrari 488 and the points leading #95 Aston Martin Vantage.

The Ferrari ultimately finished a distant third, with Gianmaria Bruni and James Calado behind the wheel.

Nicki Thiim and Marco Sorensen finished fourth for Aston to keep their championship lead going ahead of the Bahrain finale.

They were helped by problems for the #71 AF Corse Ferrari, which had to make two unscheduled pit stops at the start following contact.

Davide Rigon got caught up in a first corner collision involving the #44 Manor LMP2 car of Mathias Beche and the #97 Aston Martin driven by Darren Turner.

The ensuing repairs cost the Italian crew two laps in its pit stand.

In GTE-Am, Aston Martin Racing notched up its fifth victory of the season thanks to a dominant run by pole-sitters Pedro Lamy, Paul Dalla Lana and Mathias Lauda.

The trio now have a chance of winning the Am championship in Bahrain, with 22 points separating them from the AF Corse crew of Emmanuel Collard, Francois Perrodo and Rui Aguas.

By Paul Hensby
1 Mins read
Romain Grosjean would look at championships outside of Formula 1 if he loses his drive with the Haas F1 Team for the 2021 season.
24 Hours of Le MansFeaturesFIA WEC