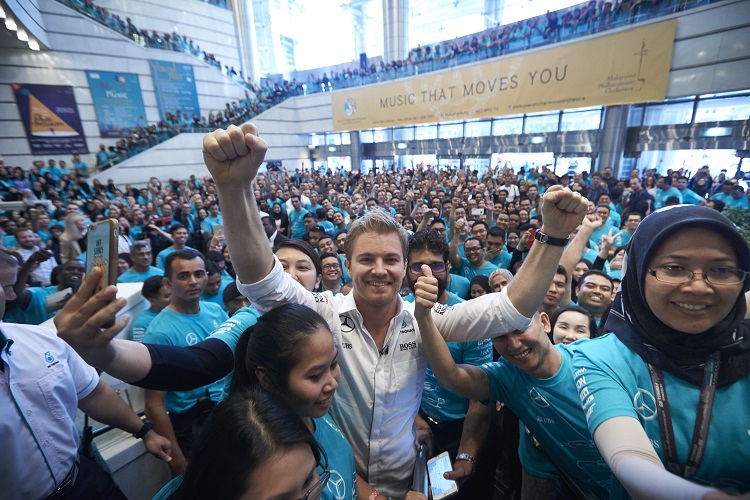 Nico Rosberg visited the home of PETRONAS on his first destination of the global celebration tour to celebrate his 2016 Formula 1 World Championship title.

On Tuesday, the Mercedes AMG Petronas Formula One Team driver visited their title partner PETRONAS in Malaysia, fresh from his triumph and celebrations in Abu Dhabi. It’s been a close season for the Mercedes drivers, with the decider for the title coming down to the final Grand Prix at the Yas Marina Circuit.

Rosberg finished behind team-mate Lewis Hamilton in second, but this win from Hamilton was not enough for him to secure his fourth World title, with the Briton ending five points behind the German in the final standings. After a career spanning eleven years, Rosberg has finally achieved his childhood dream of winning a World title.

Thousands of employees welcomed Rosberg to PETRONAS’ headquarters in Kuala Lumpur, all chanting his name in celebration of the World Championship victory. For the German, the days since his victory have come with some unbelievable emotions, adding, “I wasn’t expecting it at all and it just completely blew me away! Incredible and wonderful to see.

“It’s been a pretty intense few days. It’s just an amazing feeling to think I have achieved that childhood dream and I am World Champion. I have been working towards it since 25 years, my whole life, and it was extremely intense out there on Sunday, touch-and-go at times and it could have been really hairy to lose the championship.”

Rosberg has achieved the same thing his Father, Keke Rosberg achieved 34 years ago, for Rosberg, this is one of the most emotional parts of his title.

“It’s one of the most emotional parts of it to achieve what my Dad did 34 years ago,” said Rosberg. “My parents had prepared a video of me during my very first couple of days in a go-kart.

“Which I had never seen before; when I saw it on Sunday night on social media, I cried my eyes out, thinking of the support from both my parents across all those years.”

The celebration tour continues all this week, with Rosberg visiting his home country of Germany on Wednesday, the team’s factory based in Brackley and the FIA Prize giving Gala in Austria on Friday, where he will officially be crowned World Champion.

Balance Issues for Hamilton on ‘Difficult Day’ for Mercedes at Silverstone

Verstappen Fastest in First Practice at the British Grand Prix

Wolff: “There’s no entitlement to a good result because you had a...