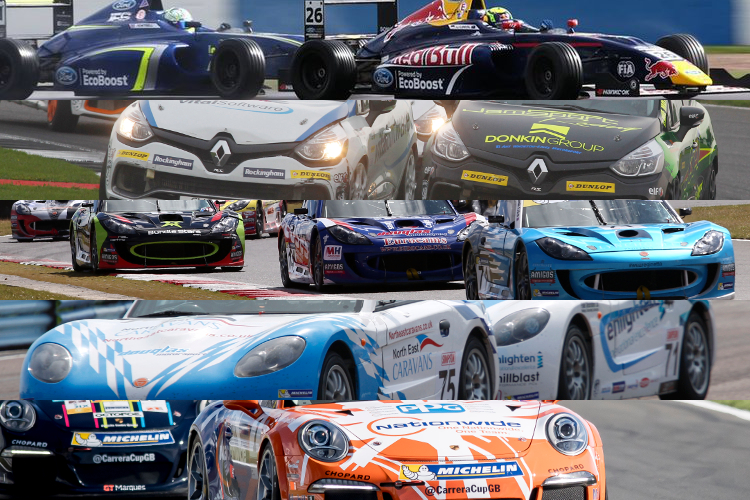 As the Dunlop MSA British Touring Car Championship served up another brilliant season in 2016, its band of support championships once again provided plenty of thrills and spills as well, with some emerging stars of the future producing lots of close-fought racing and memorable moments.

From the talented-filled grids, The Checkered Flag has picked out the top twenty drivers who impressed us most over the course of the season from the Renault UK Clio Cup, Michelin Ginetta GT4 Supercup, Porsche Carrera Cup GB, Ginetta Junior Championship and F4 British Championship.

First of all, if you missed our rundown of positions twenty to eleven, you can read it here.

With his predecessor as the Porsche Scholar Josh Webster having sensationally won the title at the first attempt, it was always going to be tough for Eastwood to follow in his footsteps, but the Northern Irishman did a pretty good job of it as he established himself as the lead rookie in the field from the off.

Benefitting from the guidance of perennial series pace-setters Redline Racing, Eastwood was a frequent podium visitor throughout the campaign and secured a deserved maiden win at the season finale – performances that mean he’s expected to be a title contender in 2017.

This season Coates got the opportunity to get back racing full-time for the first time since 2011, and the popular Yorkshireman grabbed his chance with both hands as he stunned the paddock with a top three championship finish in his maiden Clio campaign.

Firing a warning shot to his adversaries with a pole position on only his second weekend, Coates would establish himself as a regular podium finisher across the campaign, with seven visits to the rostrum including a superb maiden victory at his home circuit Croft.

It was quite a season for Burns, who produced the most unlikely of title challenges in the Supercup and went on to finish just three points shy of glory …. Having been over 100 points adrift in the middle of the season despite being a regular podium finisher from the off.

Burns showed plenty of speed, fight and determination as he charged back into contention, with a key victory at Knockhill being amongst three for the season. He eventually ended the year with one more podium finish than the champion, with those performances earning him a 2017 BTCC drive.

As a returning champion coming back to the series after a season in the BTCC, there was a degree of expectation for Bushell to be right back at the front of the field, and the 2014 victor did exactly that with an impressive campaign in his Team Pyro machine.

While he just missed out on making history by becoming the second ever multiple champion, Bushell showcased his raw pace with a stunning run of twelve pole positions out of fourteen, and also his consistency as he finished outside the top five just twice, bringing him just eight points shy of glory.

With his previous single-seater experience and the pace he’d shown in MSA Formula last year, it was certainly no surprise to see Fielding battling for the F4 title this season, but his achievement in doing so with one of the less experienced teams on the grid should not be underestimated.

Against the might of the powerhouses like Carlin and Arden, Fielding and the JHR Developments team were amongst the pace-setters throughout the campaign with five victories within eleven podium visits, with just a couple of tricky mid-season weekends costing him the crown.

In a championship as competitive and action-packed as the Juniors, with triple-header meetings and reverse grid races thrown into the mix as well, for Tregurtha to come away with top five finishes in all the races he contested bar one this season is truly unbelievable.

A record like that means Tregurtha walked away as a thoroughly deserving champion, especially with consistency not being the only string to his bow, with a glorious double win at Oulton Park being the highlight of six race victories for the HHC Motorsport ace.

It was truly a season of two halves for Wrigley, who dominated proceedings with thirteen consecutive podium finishes to start the campaign, but then almost missed out on the title in the end following some tough meetings in the closing stages of the season.

Ultimately the Rob Boston Racing star was the deserving champion though, with his sensational hat-trick of wins on both the Donington Park and Knockhill weekends showing him at his unstoppable best as he notched nine race wins on his way to the title.

Having broken into the championship top three for the last season, this was finally the year for Whorton-Eales in the Clio Cup, with a superb campaign seeing him win exactly half of the races across the season on his way to championship glory.

It was far from plain-sailing for the JamSport Racing ace though, with penalties, contact and the constant presence of Mike Bushell meaning it all went down to the final race, but Whorton-Eales’ stunning race pace and supreme racecraft eventually saw him through.

Cammish’s record really does speak for itself. This season the Yorkshireman set a new series record for wins in a season, twelve, on his way to a second consecutive Porsche title, whilst also extending a stunning sequence of 31 podiums and 24 wins in his 34 Carrera Cup GB races to date.

The 27 year old’s maiden title success was impressive, but to repeat such domination for a second season in a row with Redline Racing is truly remarkable, showcasing all the attributes that could well lead to title number three in 2017.

In his first season of car-racing, a remarkable campaign for Fewtrell saw him come out as champion from an ultra-competitive single-seater field, which produced ten different race-winners and saw six drivers heading into the finale in title contention.

While Fewtrell only took three race victories, it was a total of sixteen podium finishes, more than anybody else, that was the foundation for a title triumph that was capped off with a faultless victory in the season finale, which showed the 17 year old at his composed and calculated best.

Do you agree with our countdown? Have we chosen the right no.1? Let us know in the comments below, or on Twitter @TheCheckerFlag.

By Maurice Henry
4 Mins read
Oulton Park and Knockhill proved to be eventful for Ginetta Junior racer Maurice Henry as he continues to make his way up the grid in his debut year.
British F3F4 British Championship