Funny thing, motorsport. More than any other form of sporting endeavor, motorsport is subject to the whims and desires of third parties and outside interests – car manufacturers. Large OEM concerns are only in it for the glory and ultimately flogging more models, so they often hang around as long as they need (or dare), and, normally exit post haste with little or no warning. This leads to a kind of ‘boom and bust’ dynamic that many now accept as the natural ebb and flow of all motor racing championships, yet can also leave them well and truly up the proverbial creek without a paddle.

The FIA World Rally Championship is only too aware of the impact the whims and changing global fortunes of manufacturers can have, and the series was very nearly crippled just under a decade ago when Subaru, Suzuki, Mitsubishi, Skoda and Hyundai all pulled out within a few years of each other. The impact of the global financial crash meant that the manufacturers above could no longer justify spending millions each year competing in a sport that had become fairly niche and, from the general public’s point of view, an extravagance, and the result was that, up until very recently, the WRC was simply a battle between Citroen and Ford-backed M-Sport.

The above history got me thinking about the WRC’s golden eras, periods in the sport’s history that have been high watermarks – and there have been a few. Quite which you consider the best largely depends on your age and when you first became aware of the WRC, though the late ’70s Group 4 era, the Group B regulations of the mid ’80s and the Group A period of the mid ’90s were all very popular indeed. 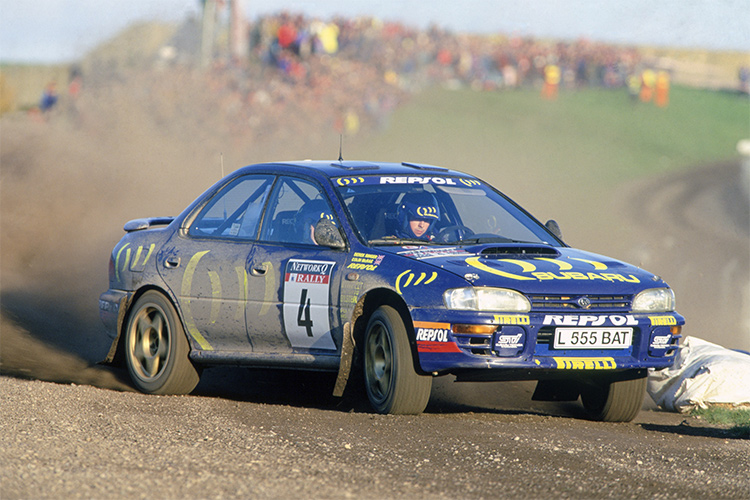 Me? Well, I became aware of the WRC as a 7 year old in 1995, just in time to see Colin McRae become the youngest champion in the sport’s history. It was a pivotal era for rallying with the production-based Group A regs soon to be superseded by the WRC rules from 1997, a strong lineup of drivers (including a crop of world class Brits) and a healthy roster of manufacturers. Indeed, by the turn of the millennium the WRC could boast of having some of the biggest names in the automotive industry; Ford, Toyota, Subaru, Mitsubishi, Peugeot, Seat, Skoda and Hyundai, with Citroen waiting in the wings, and all piloted by phenomenally talented drivers, each with their own unique personality. (Side note, remember when Gilles Panizzi made Francois Delecour cry merely by looking at him halfway through a savage row at San Remo in 2000? You wouldn’t get that in F1!)

At the time I didn’t give this impressive roster much thought, it was just what the WRC was – a list of top cars cars being driven by some of the best drivers in the world, with British interest a given due to the impressive performances of Colin McRae, Richard Burns and Alister McRae. I attended the RAC Rally (the Network Q to give it its proper name at the time) every year between 1997 and 2005, trips that cemented rallying as the overriding passion in my life and made me appreciate all that the sport has to offer. Looking back I was naive. I didn’t consider the possibility of a financial crash and certainly never thought that rallying’s top tier would ever drop so far in terms of popularity.

Then, over the course of a few short, tragic years, everything changed. First we lost Richard Burns to an illness that turned out to be an inoperable and terminal brain tumor. Colin McRae never gelled with the Citroen team he joined after leaving Ford at the end of 2002, and both he and Carlos Sainz were gone by the middle of the decade, along with Tomi Mäkinen, Juha Kankkunen and most of the ‘old guard.’ This is merely the ceaselessly moving nature of all motorsports of course, but it didn’t help that it was accompanied by the rise of to almost complete dominance by Citroen and Sebastian Loeb, and more significantly, the global economic crash. This had a huge impact on all forms of top-tier motorsport of course, but no series felt it quite as strongly or its effects for as long a period as the WRC.

Ford and Marcus Grönholm were able to maintain excitement levels by depriving Citroen of the Manufacturers’ gong in 2006 and 2007, but this couldn’t hide the fact that the series was in trouble, and by the turn of the decade the WRC was down to just two manufacturer entries. It had also shed many of of its big name drivers, Grönholm having retired in 2007, Marko Martin in 2005. This was coupled with a (needed) drive to reduce costs and a massive change in the rules governing the design of the WRC cars themselves; out went active centre differentials and 2.0 turbo engines, in came more basic transmissions and 1.6 turbocharged motors, plus a drop-down in car class size. It all added up to a fairly grim picture, one made all the bleaker thanks to the somewhat patchy TV schedule the WRC has had to endure in the UK. Is it any wonder rallying’s premier class slipped from the public consciousness somewhat?

The above isn’t meant to bring fellow fans of top-tier rallying down, rather a reminder that things can change very quickly indeed in our beloved sport, often with little or no warning. Of course the good news is that the WRC is currently enjoying something of a renaissance thanks to the new for 2017 regulations and the addition of Toyota to the team’s roster, though even here there’s cause for caution.

VW’s sudden announcement that it was to pull the plug on its WRC programme mere days after claiming its fourth straight title plunged the sports into chaos once again, and at the time of writing the dust had only just begun to settle, Sebastien Ogier having announced his intention to drive for M-Sport next year. This means that we can look forward to a tantalising battle between the greatest driver of his generation driving for a team with a relatively modest budget, against a Northern Irishman in a seemingly well prepared, works run Citroen, with an equally strong challenge from Hyundai and (hopefully) Toyota. It appears to have worked out well, but luck has played a part. Would the picture have looked quite so rosy if Ogier had decided that 4 titles was quite enough and moved on? Probably not.

So there we have it, a cautionary tale but one with much cause for optimism moving forward. 2017 does have the potential to be a watershed season for our sport, with new teams, new works contracts (which often enable drivers to relax and perform that bit better), and new wider, faster cars. Many have been quick to draw parallels between next year and the early days of the Group B era, and while I don’t necessary agree, it is nevertheless nice to see this much excitement about my favourite sport. And who knows, with a bit of luck we might find ourself with a British WRC champion this time next year.

A lifetime obsession with rallying at all levels underpins Jamie’s knowledge and love of the sport, something he’s utilised to write a wide variety of WRC-related content over the last few years. He’s can be found covering all manner of subjects, from in-depth technical analysis of Group A icons and turn of the century World Rally Cars, to post-event reports on the latest season, all on The Checkered Flag.

Marcus Gronholm returns to race with son Niclas at Holjes

Big Jump in WRC TV Audience during first part of 2020