McLaren suffer further issues in testing, oil tank shape believed to be cause 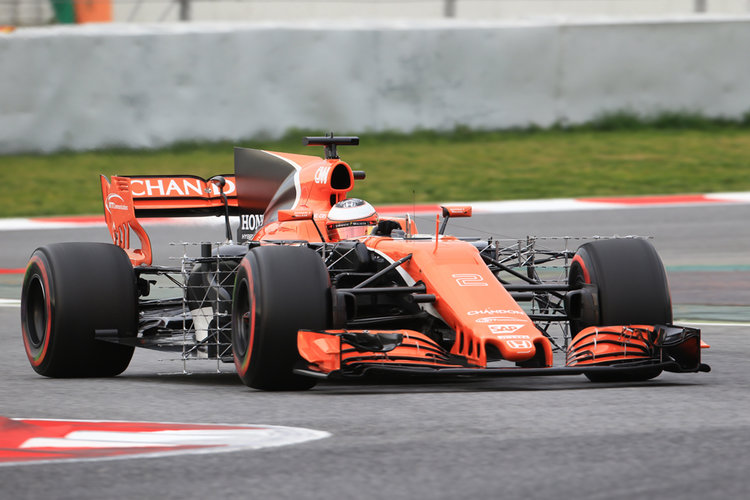 The McLaren Honda Formula 1 Team have once again hit problems on the second morning of pre-season testing in Barcelona.

With new driver Stoffel Vandoorne behind the wheel of the MCL32 on Tuesday for his first outing in the 2017 machine, the Belgian’s session was cut short having completed just two installation laps before the car stopped at the pitlane exit.

Teammate Fernando Alonso experienced similar problems yesterday, when an oil system issue with the Honda engine, caused the Spaniard to spend the majority of the day in the garage. The double world champion did get back out late on in the day, but only after Honda had replaced his engine.

Having had a brief look at the original engine on removal from the MCL32, the Japanese manufacturer believe the problems are being caused by the design of the 2017 oil tank, as Honda’s F1 chief Yusuke Hasegawa explained to motorsport.com.

“Based on initial investigations, we think the issue is related to the shape of the 2017 oil tank, but it requires further investigation before we can confirm this.”

Re-shaping an oil tank is no quick or easy task, and could have a knock on effect to other parts of the car design, in particular the power unit and chassis.

The oil tank is also a vital component for the smooth running of the engine, and to have a problem with this now will be a huge nightmare for McLaren Honda, who had hoped they would be enjoying a much more successful start to the 2017 pre-season.

UPDATE: McLaren have since advised that Vandoorne had some set-up niggles after his second installation lap, and he suggested stopping the car as a precaution, because something did not feel right. The team do not believe there is any reliability issue and the Belgian should be back out on track shortly.

By Melissa Chappelhow
7 Mins read
After a break of seven years from the Formula 1 calendar, the Nurburgring returned with bang. Hamilton matched Schumacher’s race win record of 91, Hulkenberg returned (again) and five drivers retired from the race. Read our analysis here:
Formula 1

Wolff on Hamilton’s Eifel GP Victory: “An amazing thing to witness and a fantastic drive by Lewis”