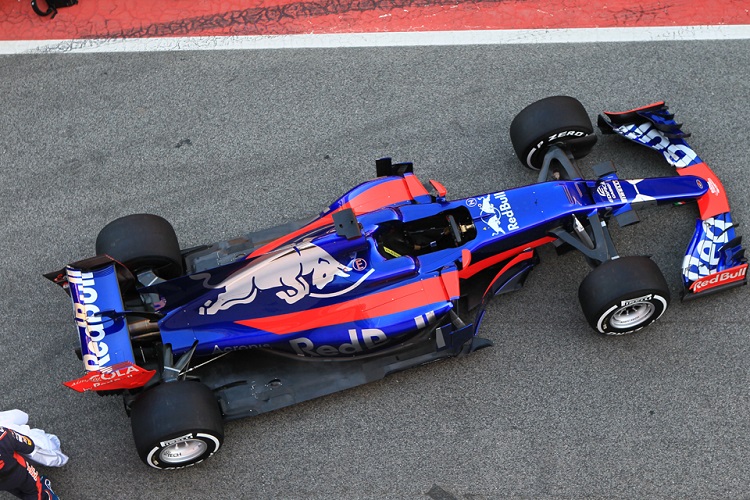 Scuderia Toro Rosso has become the final team to unveil their 2017 challenger, as Carlos Sainz Jr and Daniil Kvyat pulled the covers off of the STR12 at the Circuit de Barcelona-Catalunya on Sunday.

Complete with a brand new paint job, the STR12 will run with Renault power after its predecessor ran with a year-old Ferrari power unit, and Team Principal Franz Tost is hopeful the Faenza-based team can have a vastly more competitive season than in 2016.

“For all Formula 1 fans, 2017 should be a year of excitement and uncertainty, as the sport’s technical regulations have undergone one of the biggest changes we have seen in a couple of decades,” said Tost. “In simple terms, the cars are wider, longer, lower, faster, noisier and use bigger tyres, promising more grip, higher cornering speeds and hopefully even closer racing.

“Everyone in the team has worked extremely hard to ensure we have a very competitive season. Our chassis is mated to what is possibly the most competitive engine we have had so far in the hybrid era, as we return to Renault power once more.”

Tost believes the experience of his drivers will benefit the team in 2017, with both Sainz and Kvyat ready to adapt to the more physical challenge of the cars this season.

“Daniil Kvyat will be in his fourth year as a Formula 1 driver and Carlos Sainz will now tackle his third season with us,” said Tost. “They are a very talented pairing and they have worked very hard over the winter to be ready for the additional physical challenges involved in driving these new and faster cars.

“The crew that will look after the cars at the track is also very well prepared and generally, throughout the company we have the stability and strength in depth to tackle this season, when the pace of car development will be much faster than over the past couple of years.

“Finally, we really like the first major livery change of our twelve years on the F1 grid and this new look is reflected in our pit garage, which has also been updated to make life easier while working around these much larger cars.”