Fernando Alonso: “It’s clear we have a lot of preparation ahead of us” 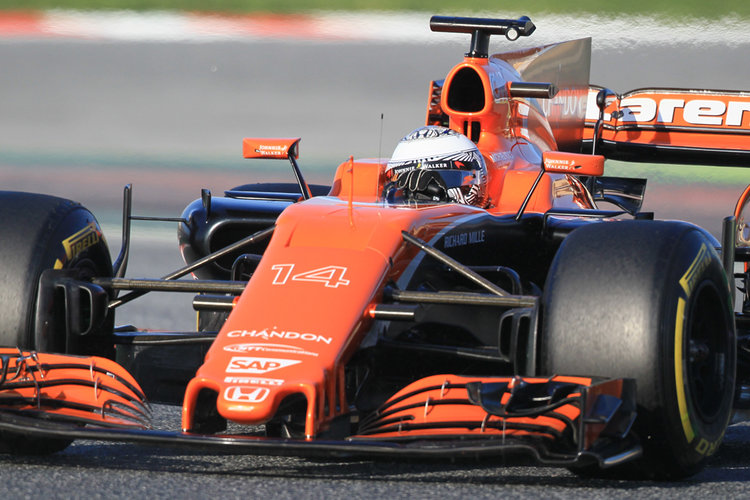 McLaren Honda Formula 1 Team driver Fernando Alonso was downbeat after the final day of testing at the Circuit de Catalunya-Barcelona on Friday, as once again the MCL32 stopped on track because of Honda engine issues.

After starting off well with thirty plus laps under his belt, the Spaniard then found himself stranded out on track when the car twice lost power because of an electrical issue, believed to possibly be the same problem that had plagued team-mate Stoffel Vandoorne the day before.

That saw Alonso resigned to the garage whilst the engineers investigated the double failure, on what was another disappointing morning for the Woking based team.

“Today was a disappointing way to end the test, as we weren’t able to make the most of the final day of running.

“The morning started positively and we were working well through our programme, until the car lost power in the corner and shut off, so I had to park it.

“We managed to fire up again without any problems, and everything ran smoothly for a few laps until it happened again, so we realised we needed to investigate deeper over the lunch break and make more changes.”

The team did manage to get Alonso back out again in the afternoon, where he was able to add to his lap tally, completing 43 in total.The 36-year old was also able to reduce his lap time significantly to post a personal best across the two weeks of 1:21.389, but that was little consolation for all the valuable track time lost during this winter test session.

“I’m pleased we were able to get going again in the afternoon – we wanted to use all the track time we could – as every single lap we do is useful for our learning.”

Having experienced such an interrupted pre-season, that has highlighted some serious issues for McLaren and Honda, they now have a race against time to resolve them before the first round of the season gets underway in two weeks time.

“It’s clear we have a lot of preparation ahead of us to be ready in time for Melbourne. I know the team is working hard and we’ll be able to find more answers once we get the car back to the factory.”

Alonso has confidence that a team of McLaren and Honda’s calibre will find a solution, and is hoping that performance can be improved by the time that first race weekend comes around.

“I’m hopeful we’ll be able to make the next step we need to be ready for Australia.”

By Paul Hensby
1 Mins read
Yuki Tsunoda is a ‘shoo-in’ to race in Formula 1 in 2021, according to his current team boss Trevor Carlin.
Formula 1

By Paul Hensby
2 Mins read
Pierre Gasly scored eight points at the Nürburgring after another strong drive, further confirming himself as one of the stars of 2020.