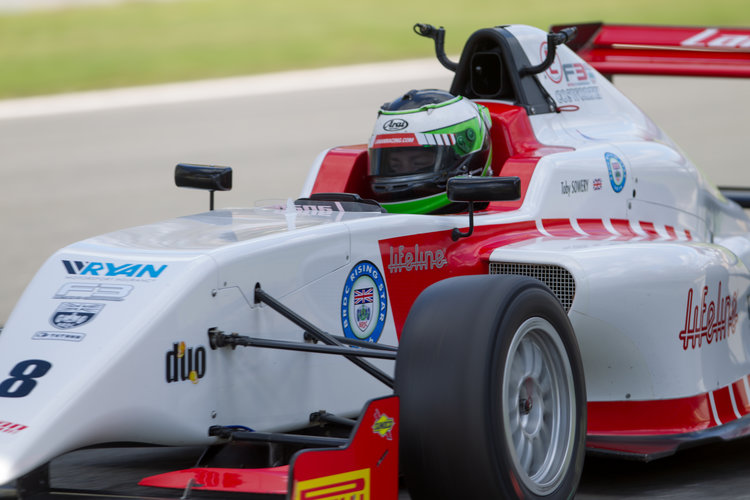 During a day that saw three different weather conditions, Toby Sowery topped the overall times with an 1min 43.479. Around the 2.98 mile Snetterton 300 he seemed untouchable in his Lanan Racing machine, during the BRDC British F3 media day.

During the second and third session, few could better the impressive running of Toby Sowery and Ben Hingeley. The two British compatriots set the pace during the sunny afternoon, as well as during the cooler third test.

With the track rubbered in, it turned out to be final session that saw the most improved times, as Sowery held on by 0.033 seconds from his Fortec Motorsports rival. Setting the fastest time on his final lap, he only further displaced the former Formula Jedi competitor who had been in touch all session.

A late lap from Cameron Das saw the American end the final session, and thus the overall times, in third. Finishing all three sessions within the top nine, he’ll look to use the momentum going into the first round at Oulton Park.

Behind him was his teammate James Pull, who was 0.184 seconds off the pace in fourth. Pull had topped the first session but failed to make an impact later on. Elsewhere, Harry Hayek rounded out the top five, finishing as the highest placed Double R Racing car.

Strong running from the underage Jordan Cane saw him finish sixth overall ahead of Enaam Ahmed, who was hopefully holding back having finished third in the first two session. Finally Jamie Chadwick, American Chase Owen and Manuel Maldonado completed the top ten.