Mattias Ekstrom has taken his second win of the 2017 FIA World Rallycross Championship and finally taken victory at the World RX of Portugal.

The EKSRX driver lined up on the front row for the Supercar Final alongside pole position man Petter Solberg. Johan Kristoffersson lined up on the middle row in his PSRX Volkswagen Team Sweden Polo with Sebastien Loeb whilst the back row of the grid saw Reinis Nitiss line up against Loeb’s team-mate Timmy Hansen.

As Solberg and Kristoffersson led off the line, Ekstrom made the key move of taking his joker on the first lap followed by both of the Team Peugeot-Hansen 208’s with Loeb ahead of Hansen. Solberg kept the lead for the next two laps ahead of Kristoffersson and Nitiss until starting the third lap he suffered a rear left puncture which saw his team-mate take the lead.

The 2015 World RX of Portugal winner kept the lead to Nitiss, however the chasing pack of Ekstrom, Loeb and Hansen began to close down the lead thanks to their lap one joker. With the first five running close, Nitiss in the third EKSRX Audi dived for his joker on lap five and dropped to fifth place from second as he rejoined the regular track.

Sebastien Loeb challenged for the lead on the last lap of the Supercar Final. Credit: IMG / FIA World RX

Kristoffersson held off taking his joker until the final lap. Ekstrom took the lead as Loeb began piling on the pressure to the 2016 World RX Champion to try and take the lead from him. At the flag it would be the former DTM champion who would take his first victory in Portugal with Loeb in second place and Kristoffersson completing the podium in third place.

Timmy Hansen came home in fourth place in the second Peugeot ahead of Reinis Nitiss whilst Solberg limped his VW home in sixth place. This now means that Ekstrom has taken a victory at every track on the World RX Calendar apart from the new South African circuit at Killarney which will debut in November.

Despite finishing the first day of Qualifying in twentieth place, Hoonigan Racing’s Andreas Bakkerud showed an electric pace from the Ford Focus RS RX as he went eighteenth fastest in Q3 before going fastest in Q4 to be placed tenth and secure a spot in the Semi Finals. Unfortunately contact during his Semi-Final race ended his day.

Ekstrom has extended his lead in the FIA World Rallycross Drivers Championship to 58 points ahead of Kristoffersson on 42 points. Solberg is two points behind him with Timmy Hansen on 33 points and Andreas Bakkerud completing the top five on 30 points. 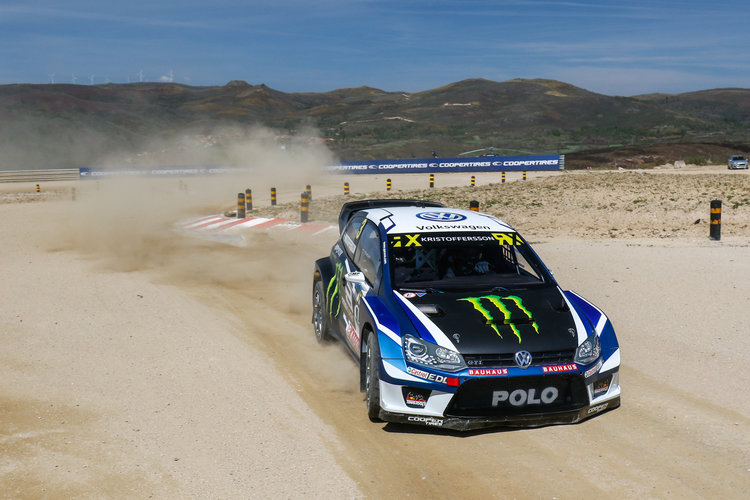 In the FIA World Rallycross Teams Championship, PSRX Volkswagen Team Sweden has taken the lead with 86 points ahead of EKSRX on 77 points. Team Peugeot-Hansen hold third place with 59 points.

The third round of the 2017 FIA World Rallycross Championship takes place at the Hockenheim circuit in Germany on May 5-7 as World RX meets up with the DTM for its annual double header event.