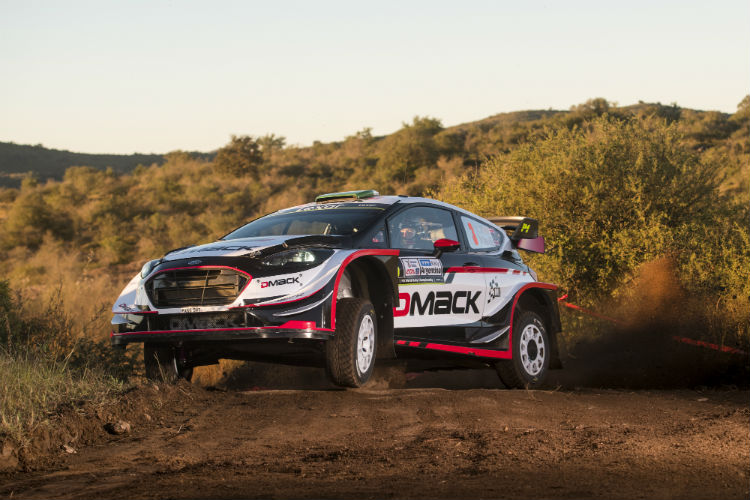 The first day was all about the Welshman as he took his DMACK World Rally Team M-Sport Fiesta WRC to six straight stage wins as the expected front runners hit trouble.

Evans has had a mixed season so far, struggling with reliability issues and problems with the DMACK tyres.

Nevertheless as soon as he arrived in Argentina everything, the car, the tyres seemed to click and with his confidence on a high, Evans set a scorching but careful pace.

The Welshman is currently on course to be the third maiden winner in three Rally Argentinas and the fifth different winner of this amazing season.

Mads Ostberg had missed the two previous rallies in order to witness the birth of his new baby and the new child seems to have brought him good luck. 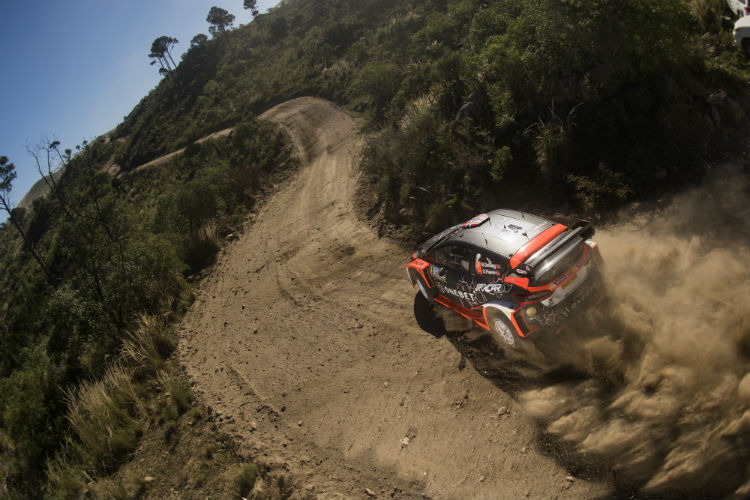 Mads Ostberg missed the last two rallies to witness the birth of his baby and Ostberg Jr seems to have brought good luck, he is second at end of day one. Credit: Jaanus Ree/Red Bull Content Pool

On only his second ever rally in the 2017 spec Fiesta WRC, jointly run by his Adapta team, the Norwegian played a patient no-risks strategy that saw him in second place by the end of the day.

Ostberg holds a slender five second lead over Hyundai’s Thierry Neuville on a day to forget for most of the top runners.

Sébastien Ogier got his bid for a first Rally Argentina win off to a good start, the Frenchman quickest by almost a second on the opening spectator stage in Cordoba City Centre on Thursday night.

But due to his status as championship leader, he was road swepper for Friday’s gravel stages struggled for pace as a result.

A slid into a ditch and a bent steering rack after clouting a rock didn’t help, but he managed to end the day in fourth place, a minute off the lead.

Ogier’s problems were minor compared to those of Kris Meeke, Jari-Matti Latvala and Hayden Paddon.

Meeke was lying in second place after stage three, his Citroen sitting just 8.7 seconds behind the Fiesta.

However on stage four the Northern Irishman lost control on a bump and launched the C3 WRC into a double roll, retiring the car for the day.

Citroen’s day went from bad to worse when team-mate Craig Breen was forced to retired when his car jammed in fifth gear.

After Meeke’s retirement Latvala took over second place despite his Toyota Yaris WRC developing a habit of bottoming out on the rough Argentinian tracks.

However, the Yaris’ engine then overheated which lost him a place and then lost two more on the penultimate stage due to a puncture.

Team-mate Juho Hanninen struggled all day with a down on power car and ended the day in ninth, nearly five minutes of the lead.

Yet it was Hyundai who had the most problems with all three cars encountering various issues.

First to encounter problems was Paddon whose frustrating 2017 season got even worse with a ‘slow roll’ on the day’s first stage which cost him nearly three minutes.

Hayden Paddon was one of many drivers to hit problems on day one. This roll cost him three minutes. Credit: Jaanus Ree/Red Bull Content Pool

On the next stage it was Dani Sordo‘s turn to hit trouble, the Hyundai hit a rock and broke the steering arm, dropping him down to 13th place by the end of the day.

Even third place man Thierry Neuville did not escape trouble, the Belgian being delayed by a broken front damper, a puncture and dust finding its way into his car and into his eyes.

Yet he is the first of the top-runners and is in the prime position to take advantage should any trouble strikes the top two.

Welcome to the Pontus Tidemand Show

In WRC2 Factory Skoda driver Pontus Tidemand was in a class of his own, fastest on all of the day’s stages.

Pontus Tidemand won every stage in WRC2 to open up a four and half minute lead. Credit: Jaanus Ree/Red Bull Content Pool

Tidemand’s rally became even easier when his closest rivals, Benito Guerra Jr. and Hubert Ptaszek both retired on stage four, meaning the Swede holds a four and a half minute lead over Chile’s Pedro Heller.

He currently holds a 51 second lead over fellow Skoda driver, local hero Juan Carlos Alonso who rounds out the podium.