The Russian Grand Prix has only been part of the Formula 1 calendar since 2014, and is situated within the grounds of the Olympic Park in Sochi, created as a legacy to the Winter Olympics that were held in the Black Sea resort earlier that year.

Bernie Ecclestone had been trying to add a race in Russia to the calendar since 1983, but it was not until 2014 that it finally got the go ahead. A number of locations around Moscow were initially favoured including the Pulkovo Ring, close to one of Moscow’s major airports, Nagatino Island and what is now known as the Moscow Raceway.

The Sochi Autodrom, located in the home of the northernmost tea plantation in the world, is one of the fastest city circuits on the F1 calendar, with plenty of overtaking opportunities due to the width of the track.

It is also one of the fastest tracks visited across the year, with the sweeping left-hander at Turn 3 a firm favourite with F1 drivers, due to the fact that it is flat out, and the utmost precision is required to take the corner cleanly. Thrilling to drive, and experience it is the longest and fastest turn in Formula 1.

Daniil Kvyat is the only Russian driver currently racing in F1, and is also the most successful, with two podiums. Vitaly Petrov was the only other Russian to compete in F1, when he drove for the Renault F1 team in 2010 – 2011, and for the Caterham squad in 2012.

The Mercedes AMG Petronas Formula One Team have won all three races so far contested at the Russian Grand Prix, with driver Lewis Hamilton claiming the first two of those victories, along with Nico Rosberg who won last year’s event. The German squad’s record does not stop there however, having secured pole position ahead of each of those races, and led every single lap run during a Russian Grand Prix.

In just one lap of the 2016 Russian Grand Prix, the course of two drivers racing careers changed forever.

Driving for Red Bull Racing at the time, and at his home grand prix, Kvyat twice crashed into the back of the Scuderia Ferrari of Sebastian Vettel on lap one of the race, as well as managing to tag the car of team-mate Daniel Ricciardo, causing damage to the Australian’s RB12.

Perhaps it would have just been put down to an unfortunate error had it been the first case of bad judgement from the Russian, however just a fortnight earlier Kvyat had also clashed with Vettel at the start of the race in China.

The incident caused the German to engage in a heated discussion with the Russian before heading out onto the podium, as well as speaking to his former Bosses, Helmut Marko and Christian Horner, about the incident after the race.

At the time, the clash in China was not considered to be any fault of the Russian’s, on reflection however, it appears his actions in that race did go against him and at the next grand prix Kvyat was replaced at Red Bull by then Scuderia Toro Rosso driver Max Verstappen. The Dutchman went on to win the Spanish race, making him the youngest ever F1 race winner at eighteen years of age.

The 2015 Russian Grand Prix saw compatriots Kimi Raikkonen and Valtteri Bottas battling for third position in the final lap of the race.

Having stayed out longer than most for their final stints, fresh rubber allowed the Finnish pair to chase down and catch Sergio Perez and Daniel Ricciardo to bag third and fourth place on the penultimate lap of the grand prix.

The battle became heated however, when Raikkonen, not content with finishing off the podium, made a rash dive down the inside of Bottas at turn four on the final lap. The Ferrari lunged from a long way back, leaving the then Williams Martini Racing driver unaware of what was about to befall him.

In the blink of an eye, Raikkonen’s left front tyre had caught the rear of the FW38, knocking it offline and into the barrier, signalling the end of a hard fought race for Bottas.

The Ferrari man limped home in fifth place, and received a thirty-second time penalty for the move, but that was no consolation for Bottas, who was left pointless and extremely disappointed. It was good news for Perez however, who came across the line in third place. 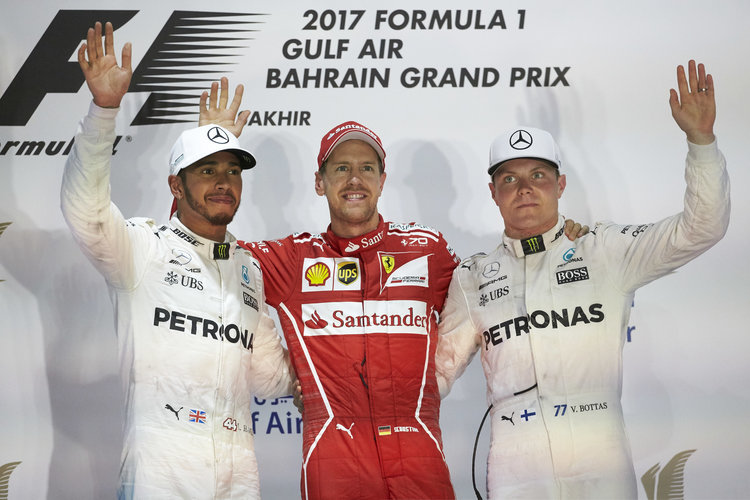 Going into the 2017 Russian Grand Prix this weekend, Ferrari and driver Sebastian Vettel have taken the early upper hand, leading the way in both the constructors and drivers championships, albeit only just in terms of the former.

The Italian squad took victory in Bahrain after a time penalty for Lewis Hamilton, for running intentionally slowly into the pits and holding up Daniel Ricciardo, cost the Brit the race.

Mercedes have dominated in Russia previously, but will that 100% run at Sochi continue, or can Ferrari put a spanner in the works?

Red Bull still sit third in the standings but do not seem to be on the pace yet of the two front running teams, they have plenty to do if they are going to join in with the fight at the front this season.

The Sahara Force India F1 Team have moved ahead of Williams to go fourth, with just one point splitting the two squads, who once again remain in close battle with each other.

Toro Rosso sit sixth following a torrid weekend in Bahrain, with neither driver finishing in the points, and Carlos Sainz Jr retiring from the race following a collision with Williams’s rookie Lance Stroll. That incident earned the Spaniard a three-place grid penalty for this weekend’s race in Russia.

Homeboy Daniil Kvyat will be hoping to make amends for last year’s unfortunate result, and this season’s car may just allow him to do that, if they can reproduce the form they showed in the first round of the season.

The Haas F1 Team move into seventh having brought home points in the last two races, whilst the Renault Sport Formula 1 Team picked up their first points of the year in Bahrain, through a ninth place finish for driver Nico Hulkenberg. The French squad look to be improving with each race, having seen both drivers through to the top ten shoot out of qualifying for the first time.

Both the McLaren Honda Formula 1 Team and the Sauber F1 Team are yet to score any points, with the Woking based squad having a particularly tough time of it out in Bahrain. Driver Stoffel Vandoorne was unable to even start the race following PU issues during his sighter lap, and Fernando Alonso retired with problems with just two laps of the race remaining, having spent much of it in with the shot for the final point, down in tenth place.

Their poor performance prompted calls for the F1 Strategy Group to discuss some form of assistance for Honda at their next meeting.

With just five days remaining until the Russian Grand Prix takes place, the scene looks set for another close battle between Mercedes and Ferrari at this weekend’s race.