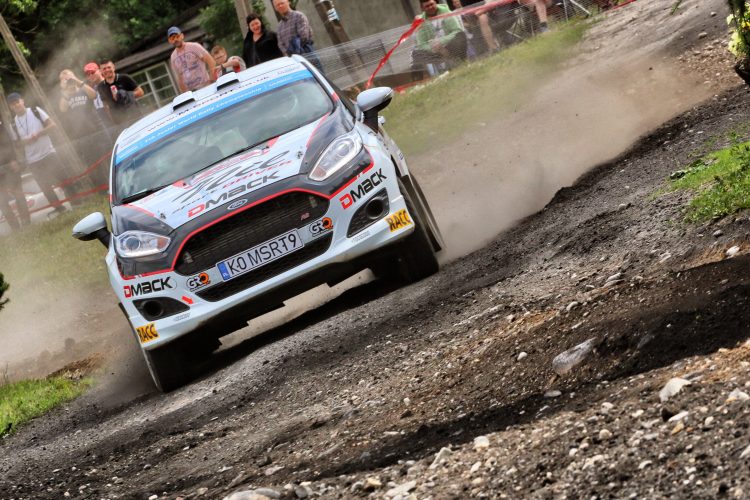 Nil Solans survived a late scare to secure a third consecutive JWRC victory, coping with a puncture on the penultimate stage to hold off Dennis Rådström for victory.

Solans had spent the previous day complaining about the condition of the roads left behind by the WRC2 cars running ahead of him, a factory that came into play once more. The sweeping effect from the four wheel drive cars ahead had spit rocks into the middle of the road – the line used by the narrower R2 specification cars present in the JWRC – and Solans hit one of these through the rerun of Orzysz stage.

“There was a rock inside the line, a big huge rock,” exclaimed a frustrated Solans immediately afterwards. “It’s impossible to avoid these rocks. The suspension of these cars are smaller and the tyres are smaller as well, so all the hits are harder for the car and for the tyres.”

This whittled down the gap to 24 seconds – having been at 40 seconds before the start of Sunday’s stages – but Rådström did not feel the need to attempt a last ditch bid for victory.

“It’s already a dream to be in this position, so I’ll just go at my own tempo,” he said after learning of Solans’ troubles.

The Spaniard took it easy through the final run, looking to avoid any more last minute issues that might cost him victory, allowing Rådström to close up by another 8.8 seconds in the rally-ending powerstage.

Terry Folb was left heartbroken by a puncture midway through the penultimate stage, costing him nearly two minutes and his place on the podium to compatriot Nicolas Ciamin.

Ciamin had been looking for a podium finish all weekend, and was happy to have finally been able to go faster in the improving conditions.

“At the first pass here I just went across the stage absolutely not pushing,” he said. “Then I saw the conditions were not so bad, so I said for this pass I will push a bit more.”

Julius Tannert completed the Top 5 with over four minutes in hand over Dillon van Way, but in last place was the disappointed Emil Lindholm, the son of former Peugeot factory driver Sebastian Lindholm having crashed out on Saturday and restarted under Rally2 rules.

“Yesterday was not a perfect day, especially in the afternoon,” said the Finn, referring to his earlier crash. “We had some good stages at the beginning of yesterday, but that one mistake has cost us possibly a podium finish. It would have been a good race with Terry Folb for third place.”

Lindholm alluded to the problems that Solans had mentioned earlier on, referencing the much talked about road conditions which were a factor throughout the rally.

“We’ve been quite cautious, especially now with the second round [of stages]. The road is in really bad condition, it’s amazing. I think most of the time we are on the sump guard sliding forward.”

His debut JWRC appearance in Poland was a warm-up for his home event later this month, Rally Finland, and is optimistic that a positive result may be forthcoming if he can keep the car on the road.

“I guess the pace is there, we just need to be consistent and not make mistakes.”

By Nick Turner
5 Mins read
Elfyn Evans secured his first win of the season as a composed drive saw him triumph as his rivals faltered.
FIA World Rally ChampionshipJunior WRCWRC2WRC3