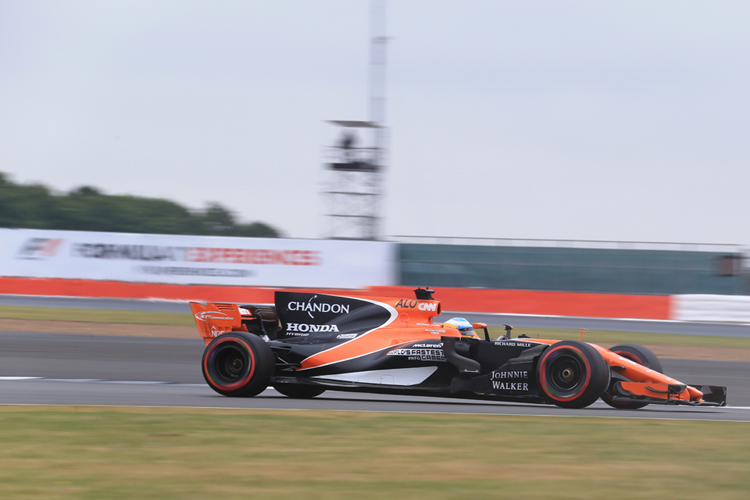 Formula 1 fans could have confused Saturday’s Qualifying for #ThrowbackThursday as Fernando Alonso topped Q1 at Silverstone.

With most competitors having set fast times on Intermediates, Alonso took full advantage of the drying track and a fresh pair of supersofts to get his McLaren Honda Formula 1 Team MCL32 to the line with barely any time to spare.

Starting his final Q1 lap just milliseconds before the flag, he charged around a drying Silverstone and set the fastest time of the session by 1.3 seconds – much to the delight of the Silverstone crowd, who could be heard cheering the entire track round.

“We made the right call at the end of Q1 by switching to Option tyres. We took advantage of a track that was on the limit at that moment – and it was nice to hear people cheering.

“It’s good for the guys in the garage as well: they deserve it as they have been working so hard these past couple of years, and, even if it’s just for one moment, to be up there at the top of the time sheets feels good.”

His heroics were short-lived however as he was only able to make it to twelfth in the second qualifying session, and he has a thirty-place grid penalty for tomorrow’s race. This isn’t something the Spaniard is concerned about though, saying it gives him more choice.

“Not making it into Q3 allows us to choose our tyres for the race. We’ll start last, owing to the penalties; starting on used Q2 tyres wouldn’t have been ideal, so we’re relatively happy with 13th.

“Now we need to think about tomorrow. We proved today that we’re quite competitive in mixed conditions, so a wet/dry chaotic race could work in our favour. Hopefully it’ll stay like this tomorrow, weather-wise.”

Pierre Gasly: “I think this is the toughest FP2 we’ve had this season”

By Paul Hensby
2 Mins read
Pierre Gasly feels AlphaTauri have a lot of work to do to be competitive this weekend at the Circuit of the Americas after a tough Friday for the Frenchman.