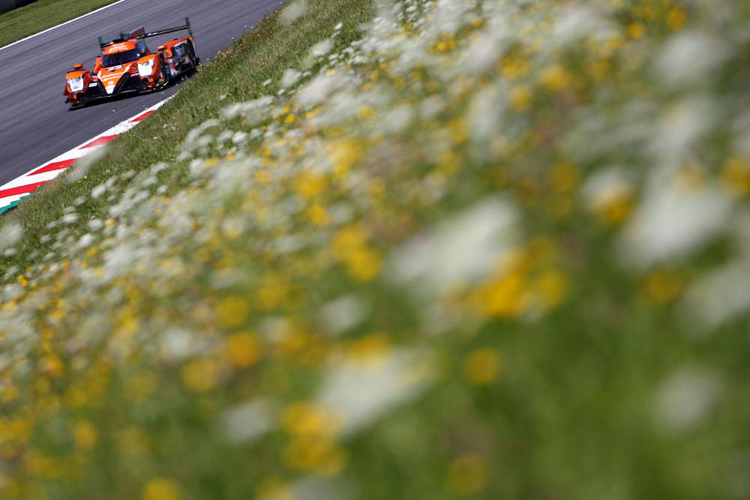 The #22 G-Drive Racing Oreca will start Sunday’s 4 Hours of the Red Bull Ring from pole position, pipping the #21 DragonSpeed by just 0.005 seconds to take the fastest time in the European Le Mans Series qualifying.

In the hands of Léo Roussel, the #22 enjoyed a session-long battle with DragonSpeed’s nominated qualifier Nicolas Lapierre, trading fastest times with its sister car. At one stage, Lapierre had a lap disallowed for track limits, while Roussel was able to take advantage of a cleaner run of laps to secure pole.

Despite an early spin in the session exiting the Remus corner, Filipe Albuquerque grabbed the third fastest time in the #32 United Autosports, beating fellow Ligier runner Nathanaël Berthon in the #23 Panis-Barthez car.

The SMP Racing team enjoyed a solid return to the ELMS, as endurance racing debutant Egor Orudzhev took fifth in the #27 Dallara P217, even though he’d never driven the car before Friday practice. Orudzhev starts on the third row ahead of fellow series newcomer Gustavo Yacaman, in the #40 Graff Oreca.

Although finishing the session in third, Graff’s #39 car had a number of laps deleted for abuse of track limits, with Enzo Guibbert’s best clean lap of 1:24.461s only being good enough for thirteenth overall, last in class.

Jensen, returning for the Austrian AT Racing squad, gave the #9 outfit hopes of a second pole position by taking the fastest time on his final lap, but was disallowed after the Dane was adjudged to have exceeded track limits.

Yann Ehrlacher put a second Norma in the top three, securing third place in the #19 M.Sport-YMR car ahead of Wayne Boyd’s #3 United Autosports Ligier, which was able to take part in the session despite sustaining damage in the morning’s free practice session.

The session was red-flagged in the opening stages, after a wheel detached from the #6 360 Racing Ligier, leaving Ross Kaiser no choice but to pull over to the side of the circuit.

The Spirit of Race team locked out the front row of the LMGTE class, as Andrea Bertolini managed the fastest time of the session in his #51 Ferrari 488 GTE.

Bertolini held off from Spirit of Race stablemate Matt Griffin, who backed out of his final lap in the #55 Ferrari after running wide at the Rauch corner and having to settle for second.

The two Aston Martins set the early pace, with the #50 TF Sport Vantage of Nicki Thiim sitting on top of the time sheets at the start of the session, but will begin Sunday’s race occupying the last row of the GTE class. The #5 By Speed Factory and the #6 360 Racing LMP3 entries sit behind the GTE class after issues in qualifying.