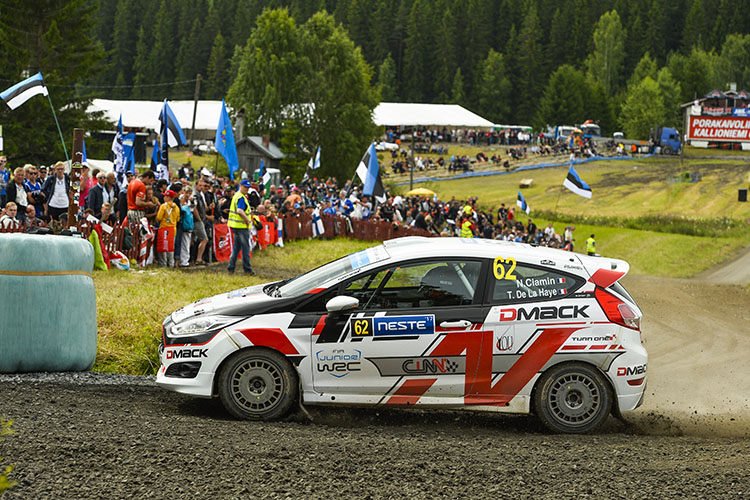 Nicolas Ciamin continued to lead the JWRC category of Rally Finland, with nearly every driver – Ciamin included – encountering issues of some kind during the day.

Ciamin had started strongly, going on a five stage winning streak starting from the morning’s second test. Drama befell the leading crew on the second pass of Pihlajakoski however, losing over a minute due to a front-right puncture.

The Frenchman was relieved to have limited his time loss through the penultimate stage, and was as interested in preserving maximum points to contribute towards the precious WRC2 prize drives as much as class victory.

“It has been a tough day but we are very happy to still be at the front,” he said. “We aren’t pushing 100 per cent but need to have one eye on the win here and one on the prize drives. You have to be brave on these stages and take a few chances to set top times. Our aim is still on the win.”

Ciamin’s puncture was a minor incident compared to troubles befalling his rivals. Terry Folb suffered another devastating blow in a difficult season, his Fiesta’s engine dying midway through the opening stage of the day. It cost the Frenchman a solid second position and forced him to retire.

The two drivers who were best placed to inherit Folb’s vacant second position both crashed in the following Päijälä test. Dennis Rådström went off the road, followed swiftly by Nil Solans, both dropping over three minutes as they recovered to finish the stage.

Both drivers mistakes will be of relief to Ciamin, who was at risk of losing the aggregate points lead over both Poland and Finland, which determines the driver that will be handed keys to a WRC2 car at two events next season.

The SS15 dramas allowed Emil Lindholm and Julius Tannert to move up as the main competitors for second place. The former finished Päijälä only 0.2 seconds behind Tannert in the overall classification, swiftly taking the position in the following stage and inching ahead for the rest of the day.

Lindholm’s task was made easier by Tannert dropping over two minutes in the final stage, and though his gap to Ciamin ahead dropped under a minute following the leader’s puncture, he too lost time in the leg-closing test. The Finn complained of his steering feeling stuck after landing from a crest, pitching him into a spin and costing him half a minute. Aside from this late incident, he was happy overall with how his day went.

“The stages today were difficult, fast but also very technical,” said Lindholm. “We didn’t really want to take any big risks as trying to push on these stages is not a good idea. Coming here to get the experience is the most important thing.”

The late time loss for Tannert has set up a titanic battle for the final podium position. The German driver remains third for now, but holds a slim 8.8 second advantage over Rådström, and 15.7 seconds over championship leader Solans in fifth.

Pajari Tests With Latvala Ahead of JWRC Finale

By Pontus Lindroos
1 Mins read
Sami Pajari – one of the candidates to claim the Junior WRC title at Monza in two weeks time – has been spotted testing at Pesämäki in Finland with former WRC driver Jari-Matti Latvala.
Junior WRC

PREVIEW: 2020 FIA World Rally Championship – Rally Italia Sardegna: Does Evans Have One Hand on The Title?

By Steven Batey
4 Mins read
Elfyn Evans has a 18-point advantage over Sebastien Ogier as the FIA World Rally Championship continues in Italy this weekend.