The young Brazilian secured pole with a time of 1.34.405, 0.15 seconds faster than Olivier Pla in the #52 PR1/Mathiasen Motorsports Ligier, who in turn was 0.8 ahead of the Mustang Sampling Cadillac DPi.

The legendary Watkins Glen track has always favoured the lower powered but better handling LMP2 cars and this (and the conditions) saw a front row lock out of LMP2 derived machines, with the dominant Cadillac DPis off the pace.

The means the WTR Cadillac faces a tough fight to continue their unbeaten winning streak, as well as racking up Endurance Cup points.

GTLM was tightly packed as expected with all eight cars separated by just seven tenths of a second, but Joey Hand grabbed pole with the largest gap in the category.

The #66 Ford GT was quickest by 0.3 seconds from the two RLL BMW M6s, who fresh off their best showing of the season at COTA look to continue their ever improving form.

Yet the sister Ford GT of Ryan Briscoe was only 0.003 of a second behind the second of the BMWs, but Porsche and Corvette were not on the pace as both of the team’s cars could only manage 1 minute 43 times.

A sad absentee was the ever popular #62 Risi Competizione Ferrari 488 which has pulled out of the series following the crash of Le Mans.

In GTD Andy Lally secured pole position for the Michael Shank Racing Acura NSX with a time of 1.46.051. 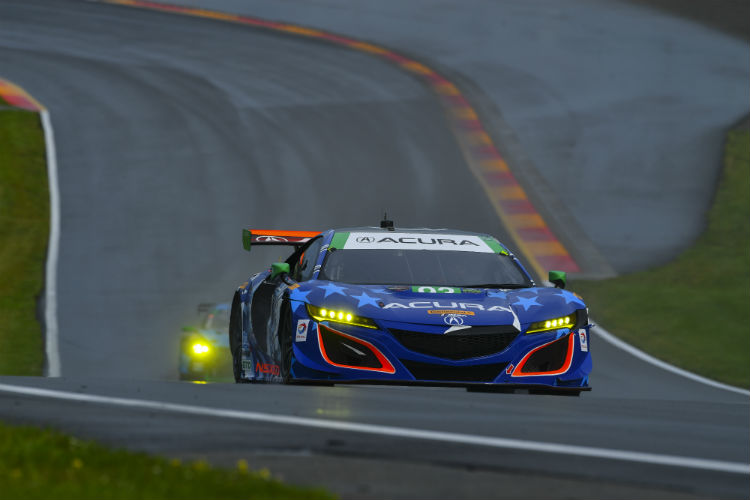 The Acura was 0.2 seconds faster than the Stevensons Motorsport Audi R8 with the 3GT Lexus occupying third place, continuing the good form from COTA.

By Josh Disborough
2 Mins read
Charles Milesi and Laurents Hörr have been selected by the FIA WEC promoters and organisers to take part in the official Bahrain test as rookies sampling the championship winning cars in Hypercar and LMGTE Pro respectively.
FIA WECIMSA