Pole goes to Toyota for 6 Hours of Nurburgring 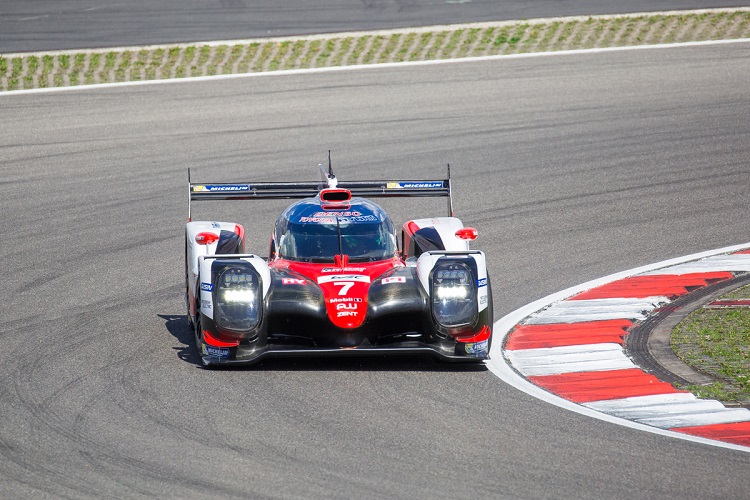 It was one of the closest battles for pole position up and down the field for the 6 Hours of Nurburgring as the World Endurance Championship cars in every class took the battle down to the wire. The biggest lead that any of the pole sitters had was 0.4 seconds. With qualifying having been so close, it can only be hoped that the race will be just a tight for the six hours it runs.

Porsche were the team to watch yesterday, with the #2 taking the fastest lap of both practice sessions. But Saturday belonged to Toyota Gazoo Racing. Thanks to Jose Maria Lopez setting the fastest time of qualifying, a 1:38.083, Kamui Kobayashi and he were able to take a strong pole position. But the duo of Brendon Hartley and Timo Bernhard in the #2 Porsche were hot on their tails, ending the session with only 0.154 seconds separating the two cars. The #1 Porsche starts third for tomorrow’s race, in prime position to help out their Championship-contending team-mates.

The #8 Toyota had a bit of a messy session, ending up at the back of the LMP1-Hybrid group. Their first lap was ruined when they had a close incident with the #35 Signatech Alpine. The Alpine appeared to turn into the #8 on the corner exit before diving out of the way, as if they had not seen the Toyota. The incident is currently under investigation.

It was a close battle between #26 G-Drive Racing and 24 Hour of Le Mans class-winners #38 Jackie Chan DC Racing for pole position in LMP2. #26 held the advantage at the driver change over and, even though Oliver Jarvis was pushing hard to improve enough to claim pole, held onto it at the chequered flag. Two-tenths of a second separated the two cars. Ben Hanley, standing in for Alex Lynn as he races in the Formula e New York ePrix, impressed the team with his highly competitive lap time, putting the team on provisional pole from the start of the session. The stellar performance from Hanley and Pierre Thiriet saw G-Drive continue their unbroken streak of pole positions this season.

For the championship contenders in LM GTE Pro, qualifying could not have gone worse. The #97 Aston Martin starts tomorrow’s race from the back of the Pro class after setting a lap time 1.3 seconds off the back of the class pole sitter #92 Porsche GT Team. The other Aston Martin faired much better, qualifying second in the class and splitting the dominating Porsche 911 RSRs. Michael Christensen and Kevin Estre took the first ever pole position for the new 911 RSR and saw that every manufacturer in the LM GTE class had taken pole position for a race event. That means that in the last four races we have had four different manufacturers start on pole position.

Another team to have taken four consecutive pole positions and been the only car to take pole in class this season are the #98 Aston Martin Racing team. Pedro Lamy and Paul Dalla Lana put in their usual spectacular show to steal the front spot of the Am class by four-tenths of a second. The #77 Dempsey-Proton Racing Porsche was the close behind second placed car. They had been showing strong pace throughout the weekend so it was no surprise to see them up battling for the front. Making it three different manufacturers in the top three, the #54 Spirit of Race Ferrari will start tomorrow’s race third.

With qualifying having shown a very close field in terms of pace, the race is expected to be the same. Teams that did not fair so well in qualifying have shown a strong race pace, so will look to come back into the fights at the front of the fields tomorrow. It is shaping up to be a race not to be missed as the cars take to the track tomorrow to battle for class wins in the 6 Hours of Nurburgring.