Former Rally driver Rosemary Smith, now a sprightly 79 years of age, became the oldest person to drive a Renault Sport Formula 1 Team car yesterday, when she got behind the wheel at the Circuit Paul Ricard, in France.

It has always been Rosemary’s dream to drive a single-seater F1 car, and as part of their 40th anniversary celebrations, Renault decided they would make that dream a reality. 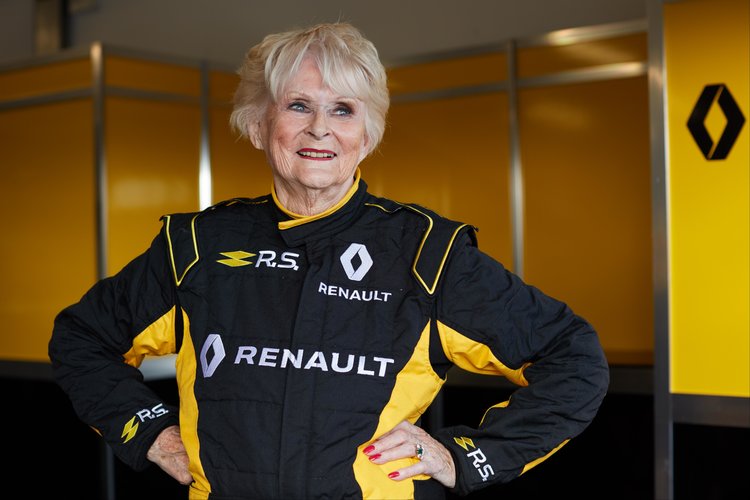 The 79-year-old started out life as a dress shop owner, having trained as a Seamstress, but got the driving bug when one of her clients persuaded her to navigate at a Rally they were going to, and the rest as they say is history.

The Dublin-born racer switched dress making for racing after realising her need for speed, and went on to take part in some of the most iconic rallies around the world, winning silverware along the way, no mean feat in what was then, as it still is now, a hugely male-dominated sport.

Though many tried to make her life difficult as a female competitor, Rosemary did not give up on her passion, and taking victory at the 1965 Tulip Rally (the oldest, largest and most famous classic car event of the Netherlands) was a turning point for her career. It certainly made people take notice of this competitive Irish woman, who was finally given the credit she deserved, for what she was doing against the odds.

It was considered such an achievement in fact, that she received huge bouquet of flowers and letter of congratulation from Hollywood film stars Elizabeth Taylor and Richard Burton.

Rosemary went on to win at the highest level in world rallying for many years, before setting up her own driving school, using Renault Clio’s, and has campaigned solidly over the last twenty years, for young driver education to be introduced in schools across the country.

Her dedication, commitment and perseverance are what stood out for Renault, and that inspired them to organise the special track day, which also included swapping notes with current Renault Sport Formula 1 Team driver Jolyon Palmer.

Rosemary soon took to driving the F1 machine like a duck to water, gaining more and more confidence and speed with every lap. The 79-year-old was thrilled to have been given the chance to drive the single seater, which she now considers to be one of her best ever experiences.

You can watch Rosemary do her stuff on track in the below video.

“Driving an 800bhp car is something I, like many other racers, have always dreamt of but I didn’t think I’d ever have the opportunity to do it, so when the team at Renault UK contacted me I jumped at the chance.

“It was definitely very different to the rally cars I’m used to, but was an amazing experience. I could feel myself getting more and more comfortable with the single-seater and being able to speak to Jolyon, driver to driver, helped when the nerves did kick in.

“It just goes to show that anyone can fulfil their dreams at any age if they put their mind to it, and always follow their passions

James Boyer, Marketing Director of Groupe Renault UK was happy to arrange the event for such an inspirational woman.

“Rosemary is a truly inspirational racer and woman who so strongly embodies our guiding principle of passion for life, so it was a privilege to help her achieve her dream by driving a Renault Sport Formula One™ Team car as part of our 40th anniversary celebrations.

“It was great to see her out on track, pushing herself to get everything she could out of the experience.

By Paul Hensby
1 Mins read
The Ferrari drivers are looking for further improvements this weekend at Portimão as they look to finish their lacklustre season on a relative high.