After a month’s break, the Blancpain GT Series returns to action, having caught its breath from a thrilling 24 hour duel at Spa-Francorchamps.

For the second time in the series’ history, the roadshow returns to Budapest, Hungary in the penultimate round in the 2017 Sprint Cup Series, with three drivers separated by a mere three points at the top of the overall Drivers’ Championship.

Vincent Abril, Mirko Bortolotti and Christian Engelhart are all in with a serious chance of claiming the crown for this year, in a clear Lamborghini v Bentley clash. 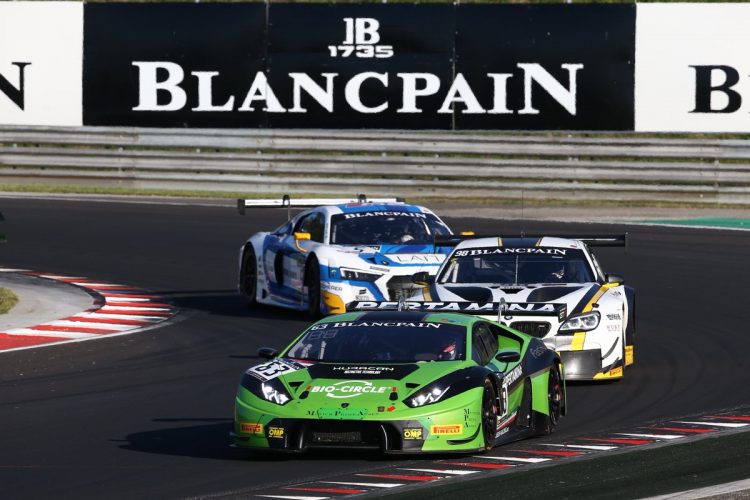 If that’s not enough to whet the appetite sufficiently, the two luxury brands are locked in a battle for the teams’ championship too – with GRT Grasser Racing Team and Team M-Sport flying the respective flags. It’s almost as close as the drivers’ standings, the difference at five points.

Furthermore, the duo have to take a wary look over their shoulders, as the HTP Motorsport Mercedes team will be looking to pick up any spoils they can, sitting ten points behind the leading Grasser squad in third.

Can HTP spring a late charge?

Having mentioned the Mercedes powered privateers, they may well be in with a chance of picking up serious points; in the series’ inaugural visit to the Hungarian capital last year, Maxi Buhk and Dominik Baumann just edged out Enzo Ide and Christopher Mies’ Audi to take a valuable win on their way to last year’s championship.

Buhk and teammate Frank Perera come into the final part of the season as leaders of Sprint Cup championship, holding a five point buffer to Audi duo Markus Winkelhock and Will Stevens – winners last time out in Zolder two months ago.

Little room for error, and Buhk knows how important consistency is both this weekend and in three weeks’ time at the Nurburgring.

“So far the season has had its ups and downs. We’ve made tiny mistakes,” Buhk reflected.

“This has to change for the remainder of the season.”

Not only content with his stellar Sprint Cup position, the 24-year-old from Reinbek, in Hamburg, has his sights set on bigger things.

“I’m still aiming for the overall championship. A deficit of 21 points sounds a lot at the moment, but as you can score 25 for a win, everything is possible.”

All to play for in Pro-Am

Mattschull lies in second place in the overall Pro-Am championship – boasting 101 points to leading pair Ahmad Al Harthy and Jonny Adam’s 108. However, with the latter pairing not taking part in the Sprint Cup series, the German is expected to inherit the lead of the series, unless Frenchmen Jules Gounon and Jean-Luc Beaubelique have their say in the AKKA ASP Mercedes-AMG GT3 entry.

For the first time this season, a Porsche will take to the track in the Sprint Cup courtesy of Attempto Racing. Former McLaren GT driver Kevin Estre will return to the series for the event as a time filler whilst the World Endurance Championship prepares for Mexico next month. Estre will be partnered by Klaus Bachler in the 991 GT3 R.

Despite being a renowned location for motorsport fans, Budapest’s first taste of the Blancpain GT Series came just 12 months ago. A beautiful city that’s popular with tourists has an equally exciting race track in the Hungaroring. Tight, twisty and technical, it tests a driver’s skill to the limit as they not only look for the best possible line, but a rare overtaking spot.

Turn 1 is usually the place to see the action, a long right hander that opens up on the exit comes at the end of the track’s longest straight, although Turn 4 at the climax of the hill can be an opportunity for the overly brave.