Ahmed Wins Race One as Heavens Open in Closing Minutes 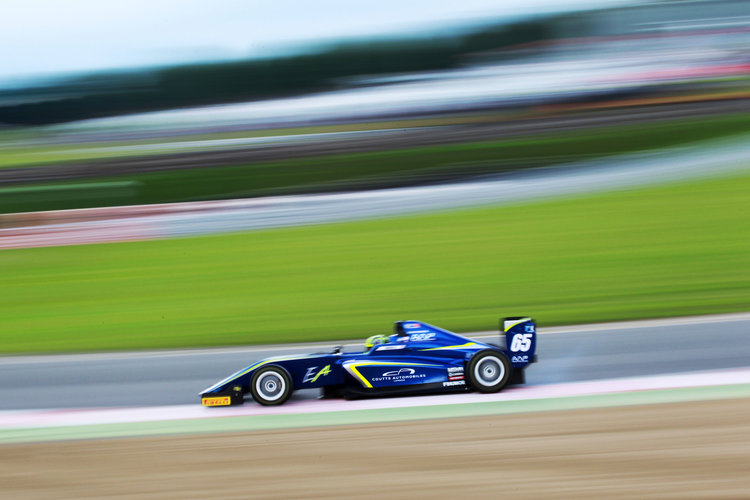 A sudden downpour saw Enaam Ahmed fight to hold on to the overall win in the opening race with a red flag needing to be called. The first BRDC British F3 Championship race at Brands Hatch GP started in overcast conditions though drastically got worse in the closing stages.

It was a dominant start from polesitter Ahmed, with the Carlin driver pulling out a few car lengths by Druids. He would remain relatively unchallenged throughout the race, comfortably driving towards the line as his rivals battled for positions behind.

It had been Ben Hingeley who made the best start, taking second from James Pull through the first corner. Hingeley though could not match Ahmed’s pace and held up a queue of cars down to sixth place.

After two laps behind, Pull finally dived out from behind the slipstream to take second around the outside of Hawthorns. At the same time, Toby Sowery and Callan O’Keeffe were swapping fourth, with the South African edged onto the grass a few corners later.

O’Keeffe lost momentum and dropped behind Nicolai Kjaergaard as well, with Sowery quickly past Hingeley.

The race would change tone though with 10 minutes to run as the rain returned to the Brands Hatch circuit. A slippery layout meant that Hingeley ran off at the first corner and retiring, with Kjaergaard almost following in sympathy. A safety car was called though when Cameron Das hit the wall at Paddock Hill.

Ahmed would take the win due to a red flag with Pull having been closing in the final lap as Sowery completed the podium.

O’Keeffe and Jordan Cane inherited positions in the top five with Jeremy Wahome classed as sixth, despite spinning under safety car on the penultimate lap. This meant that Kjaergaard and Krishnaraaj Mahadik rounded out the top eight.

“It was the hardest win yet, the most scary by far!” said Ahmed to TCF. “This is one of the worse tracks you want in the wet because it’s fast around the back.

“James was really good and he was catching me, he had nothing to use so was just throwing it in. I had to think more about the championship so as soon as it rained I backed off the pace, to try and keep the car on the track.”