Enaam Ahmed: “It Feels Very Numb at the Moment” 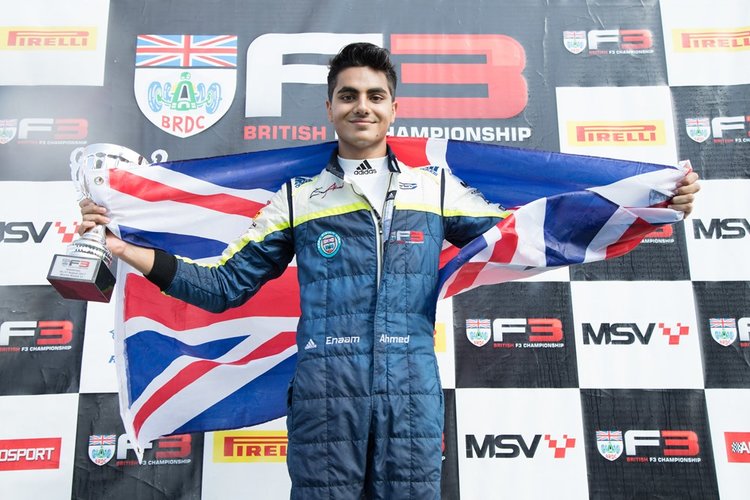 While he had to wait until the final race, Enaam Ahmed impressed many by wrapping up the BRDC British F3 Championship with a round to spare. The Carlin driver simply had to finish the race, yet exceeded expectations by blasting away from pole for his twelfth win of the season.

Two wins and a fifth rounded out a successful Snetterton weekend for Ahmed, whose attention will have now switched to 2018. It was recently announced that the 17-year-old would get the chance to test the FIA European Formula 3 car thanks to Carlin as he assesses a move for next season.

“It feels very, very numb at the moment!” said Ahmed about his title win. “I’ve been working towards this for over a year and a half and there was a lot of people around me, so I’m very thankful for that. What a better way to celebrate it than with donuts, I feel really happy about it.”

He celebrated afterwards by performing donuts with his Carlin car on the Snetterton straights before driving back into the pits.

“I asked the stewards about it and they said do what you want. They wanted a good show and I gave it to them … we made a lot of smoke.”

Trevor Carlin was at the circuit for the event, with the champion believing he’d done enough to impress the boss.

“He believed in me back in October when we did the F3 Autumn Trophy and he signed me on full time, so I’d like to say a real big thanks to Trevor and everyone at Carlin, they’ve done a phenomenal job for me this year.”

“I also want to thank my parents, my mum and my dad for believing in me, it’s been a tough few years. As well as my coach Roberto who always comes to see me and support me.”

He admitted that despite winning the title, Ahmed will not hold back in the final round, claiming; “I want to go out for the win.”

By Michael Callander
2 Mins read
Alex Fores will compete the first weekend of the British F3 season with Chris Dittmann Racing, and is hopeful of securing funding to stay for the full campaign.
British F3