Günther Still Fronting the Championship Despite First DNF of 2017 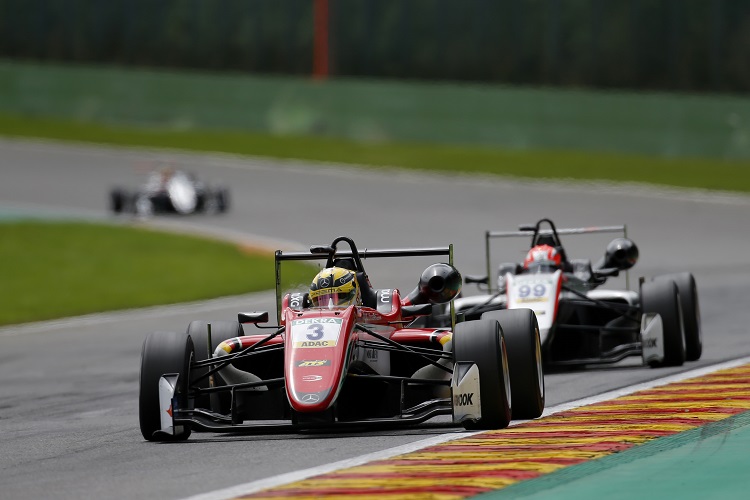 Maximilian Günther remained as the leader of the FIA European Formula 3 Championship standings by eighteen points after two podium finishes at Spa-Francorchamps, but it could have been a bigger had it not been for his first retirement of 2017 in race three.

The Prema Powerteam driver started fourth in race one and moved up to second on the opening lap, but Günther found himself shuffled back down to third before the end when Nikita Mazepin found a way through, with the German admitting to not being happy with the balance of his Dallara.

“I got off to a really good start from fourth place and immediately put pressure on the front-runners,” said Günther. “By the time we were through Eau Rouge, I had already overtaken two of them and was in P2.

“However, the balance of my car was not quite right, so I was unable to attack the race leader. That was also the reason why I was ultimately unable to hold on to second place to the finish.

“Third place was the maximum I was going to get with my car on the day. But those were important championship points that I scored in the first race.”

Günther moved up to second on the opening lap of race two and the battled Callum Ilott for the lead, only for Ferdinand Habsburg to come through and deny them both for the win, while Joel Eriksson came through to claim second. For the German however, seeing title rival Lando Norris crash out meant he gained a good number of points on his rival.

“It was a similar start to the one I had in Race 1,” said Günther. “Once again, I moved up from fourth on the grid to second.

“The battle with my team-mate Callum Ilott was especially enjoyable. We exchanged positions several times. I was in the lead for long periods of the race, but I was unable to open up a big enough gap.

“The tyres were degrading badly, and the balance of my car was still not perfect. It was like fighting with one hand tied behind your back. This time too, I came third. One of my main rivals for the title didn’t finish, so the points were all the more important.”

Günther’s podium run came to an end in race three, with the German colliding with Jake Hughes on the Kemmel Straight, with the Prema driver blaming the Hitech Grand Prix ace for the incident, although the stewards deemed it to be a racing incident.

With his title rivals Norris and Eriksson claiming first and second, it landed a big dent in his championship ambitions, although he remains on top of the leaderboard with four rounds remaining.

“It started just like the other two races – quick off the mark and soon up to second place,” said Günther. “The pace was not ideal, however, and after a few laps I was down in fourth place.

“While I was attempting to exploit the slipstream of the cars in front, I got involved in a scrap with another driver. I gave him enough space, but he didn’t use it and there was a collision.

“It was unfortunate, of course, but the stewards saw it as just a standard racing incident. I had certainly imagined the race panning out differently, but hey, that’s motorsport.”