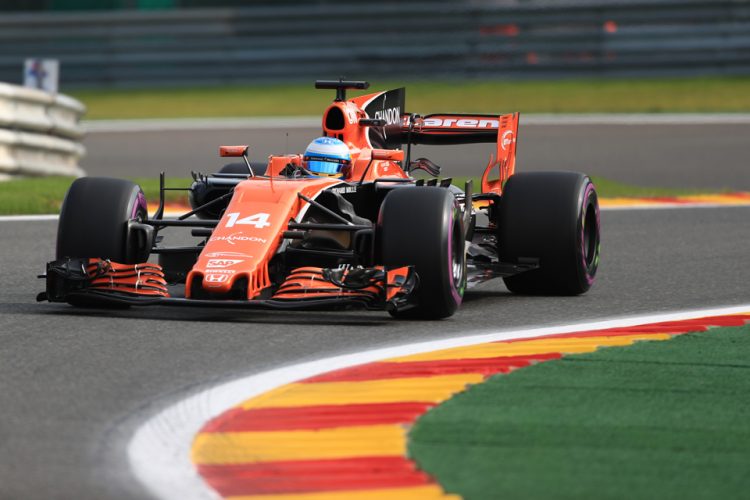 Fernando Alonso is expecting a tough weekend at Monza as McLaren-Honda continue to struggle against their rivals. Credit: Octane Photographic Ltd.

As the McLaren-Honda Formula One Team look to cement their 2018 plans amidst rumours of a McLaren/Honda divorce, number one driver Fernando Alonso expects a tough weekend at the Autodromo Nazionale Monza for the 2017 Italian Grand Prix.

The ultra-fast Monza is likely to expose McLaren’s weakness more than most circuits as Honda continue to struggle to match its rivals for out-right performance and reliability.

Despite the likely struggle ahead, Alonso speaks passionately about the circuit he has won on twice before, in 2010 for Scuderia Ferrari and 2007 during his first stint with McLaren.

“Like Spa, Monza is one of those legendary tracks where everybody loves watching cars going racing. With the new wider, faster cars this year, it will definitely be another circuit where we’ll see a new fastest lap and some incredibly high speeds on the straights.

“It’s the fastest circuit on the calendar in terms of outright speed, and for a driver it’s an incredible feeling racing down those iconic straights punctuated by the tight chicanes and big, fast corners that require a huge amount of commitment.“

However, Alonso acknowledges that his chances of adding a third Italian GP victory are slim as the double world champion expects a challenging weekend.

“We’ve always said this circuit wouldn’t suit our package, and we expect a tough challenge. Although it’s power-hungry like Spa, it’s also different in many ways. Spa is a long race; the Monza circuit is short and sharp and the race always feels like it’s over very quickly.”

With McLaren-Honda’s poor reliability, it could be over quicker that Alonso would like…nonetheless, Alonso is keen to mention his admiration for the passionate Italian fans.

“The thing I love most about Monza is the fans. Even when you’re not dressed in tifosi red, the fans come out in force and they’re all super passionate about racing and motorsport.

“The Italian Grand Prix is a favourite for many people and it really deserves its legendary reputation as a magic circuit for race fans.”