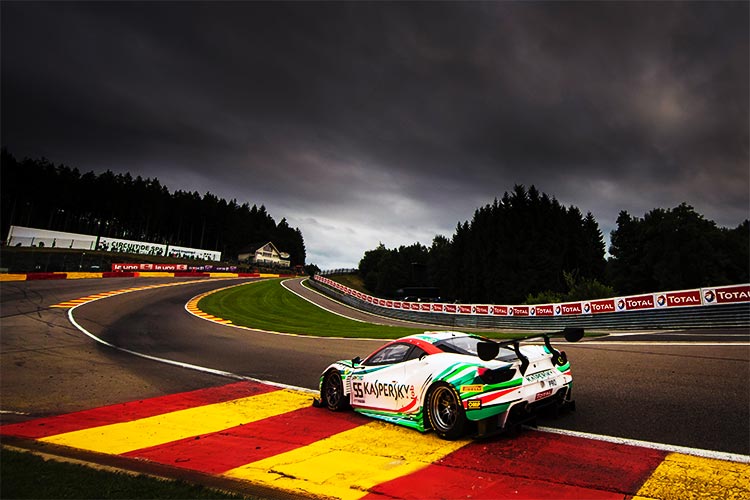 The Kaspersky Motorsport team was left thinking what could have been after dominating more than half of the 2017 Total 24 hours of Spa, before an accident caused by collision damage took them out of the race with ten hours remaining.

Following a stunning performance by the team in qualifying and then by 24 hours of Spa debutant James Calado in Super Pole as he put the Ferrari 488 GT3 on pole position for the iconic race the team made a break from the field as soon as the flag dropped.

Giancarlo Fisichella took on driving duties for the opening stages as he pulled away from the chasing crowd. After numerous driver changes, pitstops, brake pad changes the white, red and green AF Corse prepared car was running perfectly at the front of the field, things were looking good for the team as they looked to break ROWE Racing‘s hold on the 24 hour epic.

Unfortunately with ten hours remaining there was a collision at the La Source hairpin, an ambitious lunge from the #90 Mercedes on the inside resulted with a broken right front suspension, unknown to Marco Cioci who was driving at the time, he got back on track after the incident at La Source and headed down to the superfast Eau Rouge/Raidillon section of the track. After the quick flick left Cioci turned to go right but the car didn’t respond, from the outside it was clear there was something up with the front right wheel.

Unable to turn in, Cioci hit the barrier with the front left of the car, putting it out of the race, thankfully as a testament to the safety of modern sports cars, the Italian walked away from the accident uninjured but visibly frustrated that he was out of the race.

“It’s very disappointing, because I thought it was going to be our day, as we had the pace to do it.” said a disappointed Cioci. “However, once again we found out how hard is to win 24 hours of Spa. It’s just incredible. The car has been very good all weekend and the team did a fantastic job; all week we were impressed by the balance and efficiency.

“So to be out of the race like this is hard to take. It doesn’t seem possible. This race doesn’t want to come to us for some reason.” added the dejected Italian.

Fisichella echoed the thoughts of his fellow countryman as he told of his mixed feelings from the race, “It was a difficult race on our and I have mixed feelings to be honest.” he said. “I was hoping for a much better result today.

“We tried our best but things didn’t go our way. Obviously we had a great start in qualifying and the first part of the race when we were leading. It was fantastic to be in the lead and start from Pole.

The former Formula 1 driver could see a silver lining in the weekend as he added, “This is very positive and I’d like to thank everyone – the engineers for setting the car up well and the mechanics for some very fast and precise pit-stops.”

British driver and Super Pole winner James Calado couldn’t believe that bad luck had struck the team once again, “Unfortunately we were unable to finish and my first 24 hours of Spa was a tough race. After qualifying in pole position and a great start from Giancarlo we lead the majority of the race. The car was handling extremely well and we were able to manage the tyres and maintain a comfortable lead. Unluckily for Marco he had contact with the Mercedes and that put us out the race.

“Despite the unlucky result, we had a positive weekend. Especially for myself, I took a lot of risks to get to where we were! At least we come away with some points which are useful for the championship. I would like to thank everyone for their sacrifices and hard work over the last months to prepare for this race.

“We won’t give up; we came here with such a good car, which gives me faith in the team, so that I believe we will do it one day.” said the defiant Brit.

Dinamic Motosport take a commanding victory at the Nurburgring

GPX Racing lead a Porsche 1-2 at the Nurburgring