Punishing Meeke Does Not Help Him – Ari Vatanen

Ari Vatanen has criticised Citroen’s handling over Kris Meeke‘s removal from the French marque’s line-up at Rally Poland, saying they did not follow “the right policy” in benching him.

Meeke had been stood down by his team for the Polish round of the World Rally Championship, team boss Yves Matton electing instead to run Volkswagen refugee Andreas Mikkelsen in his place.

The decision came after a string of retirements from accidents throughout the season. His eighth place at Rally Finland was only his second points finish of the season, following a win at Rally Mexico in which he flew off the road in the final stage and into a spectator car park.

Vatanen felt that despite the lack of consistency from the Northern Irishman, it was unjust to demote him for Poland, suggesting a strict approach was not an effective method of improving his performances.

“I personally don’t believe in sanctions,” he told The Checkered Flag. “You can only train a dog by encouraging it, and a human being is the same. If you feel you are being trusted despite your mistakes – of which you are the first to feel ashamed of – that will bring the best out of you.”

The 1981 champion pointed to an example set by his former team boss Jean Todt, whom he drove under whilst at Peugeot Talbot Sport between 1984 and 1985. He had failed to finish a rally at the mid-point of his debut season with the French team, but won his next five rallies in a row immediately after securing a one year contract extension into ’85.

“That was one of the strengths of Todt. Other team managers would have said “Ari, in the first half of the year you have made many mistakes and not done good at all. You really need to get your act together now for the second half of the year in order to renew your contract.”

“Jean Todt would instead say; “OK Ari, your first year hasn’t been brilliant, but you know this yourself. I believe you can do a lot better. To relieve the pressure off you, so that you don’t have to work with a knife under your throat, let’s make a contract for next year right now, in July.”

“I then thought; “You want to give me a contract even if my results are not so good? Wow!” That takes all the pressure off”. Then you will have a fantastic second half of the season.”

While Vatanen conceded Meeke had made several mistakes during the course of the year, he re-iterated his position that removing him from the Citroen lineup, rather than provide him with job security to allow him time and space to recover, was detrimental to his form.

“Citroen did not apply this policy, which I believe is the right policy,” he continued. “It’s true Kris has made many mistakes and he has to sort it out, but it’s not by punishing him that you help him. You can see he was off the pace in Finland.

“I don’t believe in sanctions. It hurts the team and it hurts the drivers themselves when they have done a mistake. It really does hurt you, and he has to look for solutions, but I don’t think a punishment is part of it.” 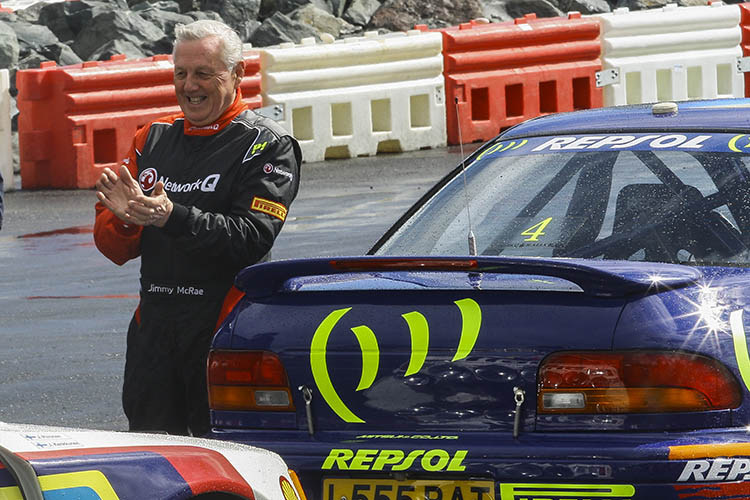 Jimmy McRae is still closely associated with Meeke, his father having mentored him throughout his junior rallying career.

Jimmy McRae – whose son Colin had mentored Meeke until his death in 2007 – was similarly critical of Citroen’s handling of Meeke. He had struggled to match team-mate Craig Breen‘s pace throughout Rally Finland, and McRae attribuited this lack of pace to missing Poland specifically.

“I think they did the wrong thing,” he told TCF. “It showed in Finland. He needed a rally before Finland to get his confidence back. He needed to go to Poland and drive the rally – whether he finished first or fifth – use that rally to get into the groove for Finland.

“To miss a month in the car and then go to Finland, I think it was totally the wrong decision.”

The five time British Rally Champion was especially aggrieved by the timing of the driver swap, saying that the impact would have been lessened if an asphalt event had immediately followed his demotion, rather than Finland.

“It would be different if it was Finland they had missed out and the next event was a tarmac event. That wouldn’t have been so bad, but to miss a gravel event before, and then two weeks later having the fastest gravel event in the world, that was totally wrong.”

McRae said it was just one in a line of odd decisions by the French manufacturer, including Matton refusing to deny rumours of a comeback of Sebastien Loeb for next season, potentially a threat to Meeke’s seat.

“I think there’s a problem with the whole situation at Citroen. The car is obviously not handling as well as it should. The French are very much “their way or no way,” and they’re losing out as a result. I don’t know what they’re up to. I think it’s wrong what they’re saying.

“If Kris is on the game and he’s happy, Kris will beat Loeb.”

Meeke will participate in Rally Deutschland next weekend alongside Breen and Mikkelsen, with Stéphane Lefebvre the driver making way in the three car line-up for the Bostalsee-based event. Citroën have yet to confirm their driver selections for the remaining three rallies in Spain, Great Britain and Australia, with Mikkelsen’s current deal set to end after Germany.