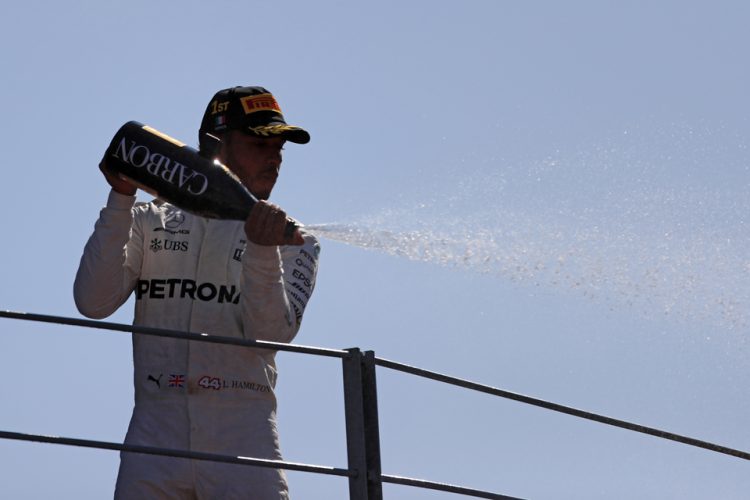 Lewis Hamilton may have played the part of pantomime villain at Monza but it didn't stop him from claiming a dominant victory. Credit: Octane Photographic Ltd.

For decades, Monza has been the amphitheatre for Formula One’s annual pantomime and the plot is always the same: a cast of villains fight against the tifosi’s heroes, Scuderia Ferrari, for victory at the Italian Grand Prix. This year, the villains won, beating the famous prancing (pantomime) horses…and they did so convincingly.

The Mercedes AMG Petronas Formula One Team didn’t just win the 2017 Italian Grand Prix; they dominated the race to score a one-two finish. What’s more, they didn’t just beat Ferrari, they embarrassed them. But, wasn’t that always going to be the case?

Along with the previous venue, Spa-Francochamps, Monza was billed as a power-hungry circuit, suited therefore to the works Mercedes outfit and their superior power unit. Monza, therefore, as well as Spa, had been earmarked as a place where Ferrari may struggle to match their title rivals.

At Spa, Sebastian Vettel limited the damage sublimely by pushing Lewis Hamilton all the way and losing just seven points in the title race. At Monza, Vettel claimed third, behind both Hamilton the victor and the other Mercedes of Valtteri Bottas. Thus, Vettel lost a further 10 points – and the championship lead – on a circuit the experts believed he couldn’t win on anyway. But it was the distance between Vettel and the winning Mercedes that left the Scuderia with red faces to match their red overalls.

Ferrari may have had the support of the enthusiastic tifosi, but they struggled to match their nearest rivals. Credit: Octane Photographic Ltd.

Vettel finished some thirty-six seconds behind Hamilton with the other Ferrari of Kimi Raikkonen a full minute behind the race winner. Some of that gaping void could be put down to Raikkonen and Vettel’s poor starting position having struggled in the torrential downpour in qualifying to line up on a jumbled grid in fifth and sixth respectively.

Both Ferraris had to fight their way by the Williams Martini Racing of Lance Stroll and the Sahara Force India of Esteban Ocon whilst the Mercedes duo sprinted away at the head of the field. However, once in clear air, neither Ferrari had the pace to match Mercedes, and while Vettel suggested post race that his car had damage following a brief exploration of the turn one run-off on lap forty, he was already well on his way to being half-a-minute behind Hamilton.

Ferrari’s top honcho, Fiat-Chrysler CEO Sergio Marchionne, said that Ferrari simply “screwed up”. “The set-up for the car was wrong,” said Marchionne. “I think we underestimated the circuit.

“I think we screwed up from Belgium, from Spa, into here. Now, we need to go back to the factory and find out which way the car went sideways. But we will be back in Singapore.”

Ah, yes, Singapore, redemption looms, a “Ferrari track” since their win there in 2015 and seen now as a must-win for them if they are to keep their championship challenge on track. The question is though, did Mercedes so comprehensively beat Ferrari in Monza solely due to it being a power-hungry circuit, or have the Silver Arrows taken a leap forward in car development that will see them maintain their Monza advantage at the remaining races of the year? The answer waits for us in Singapore. 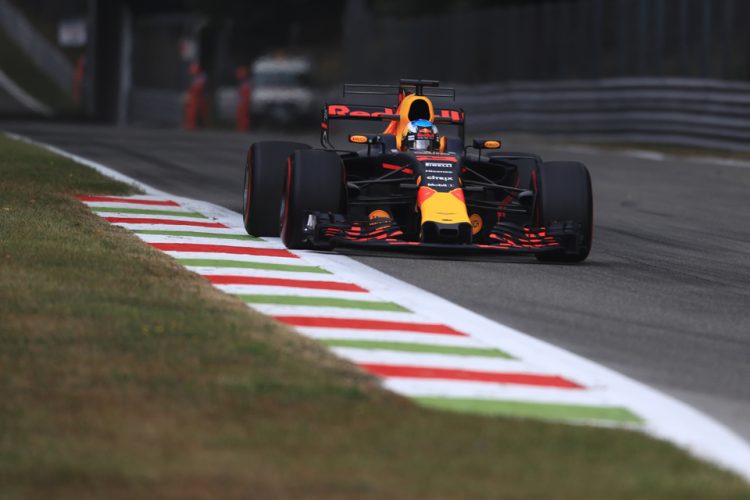 Behind the dominant villains of Hamilton and Bottas, one of the Monza pantomime’s supporting actors clearly hadn’t read the script; Red Bull Racing’s Daniel Ricciardo had originally qualified third but with his grid penalty for changes to his power unit – plus a multitude of grid penalties for a further eight drivers – he eventually lined up sixteenth.

With a spirited drive – “one for the fans” – the Australian claimed fourth, splitting the Ferraris and along the way displayed his supreme overtaking prowess and demonstrated why, in the eyes of this humble writer, Ricciardo has become the most rounded driver on the grid…

The outright pace has always been there with Ricciardo but the finesse and feel he shows when pulling off daring overtakes has blossomed in recent years, culminating in some audacious moves at Monza. Take his move on Sergio Perez at the Variante della Roggia (the lap’s second chicane) for example: Ricciardo stalked Perez through the Curva Grande, edging closer as the Red Bull picked up the slipstream from the Force India. Approaching the chicane, Ricciardo feigned a move to the outside of Perez who had blocked the middle of the road.

In the blink of an eye though, Ricciardo darted across the track from right to left, inches behind Perez as they entered the braking zone and passed the Mexican on the inside.

It was a calculated move, set up at the exit of the previous chicane, and difficult to pull off, but he did so masterfully. But haven’t we seen something similar before? Indeed, Ricciardo pulled off an identical move at the same spot in 2014 against none other than his then team-mate and reigning world champion, Sebastian Vettel.

Out-foxing Perez was one thing but Ricciardo’s move on Raikkonen on lap-41 was a whole other beast. He out-braked Raikkonen into Variante Rettifilio (the first chicane) from so far behind the Ferrari that I choked on a roast potato and it’s likely the move caught Raikkonen by surprise too; nobody else so much as attempted an overtake from such a distance.

It was reminiscent of a move Lewis Hamilton pulled in 2007 at the same place, again on Raikkonen, and showed that Ricciardo should perhaps be thought of just as highly when considering the greats of this era, if not solely for his overtaking ability then for his overall approach to racing.

Elsewhere, a good race for Williams, who capitalised on a great qualifying result, and Force India, whose drivers managed to avoid crashing into each other to score yet more good points, was once again contrasted by the fortunes of the McLaren-Honda Formula One Team.

While Monza may have provided the annual pantomime, the ongoing McLaren/Honda saga is more akin to a soap opera, one, it is believed, that is preparing for its final episode.

When that final episode is eventually aired, it’s likely that the fallout will warrant its own analysis from The Checkered Flag but at Monza it was yet another tale of frustration.

At a circuit where the down-on-power Honda  unit was expected to see to it that McLaren struggled, Stoffel Vandoorne surprised many by fighting on the fringe of the points in the early stages of the race before a perhaps inevitable retirement.

Likewise, Scuderia Toro Rosso driver Daniil Kvyat said Fernando Alonso’s ability to keep pace with him was “alarming” but again, the performance yielded nothing but another DNF for the increasingly exasperated Spaniard.

Ferrari will look to get their title challenge back on track in Singapore. Credit: Octane Photographic Ltd.

And so, like Ferrari, McLaren now turn to the Marina Bay circuit and the 2017 Singapore Grand Prix in the hope of claiming better results. Ferrari will see it as a must win in order to get their championship challenge back on track while McLaren will look to score points on a circuit where chassis balance plays a bigger part that outright power.

All the while, the rest of F1 2017’s key characters will look to start the final stretch of fly-away races with strong results as the sport bids farewell to the European leg of the season. Seven races remain and there’s three points in it at the top…